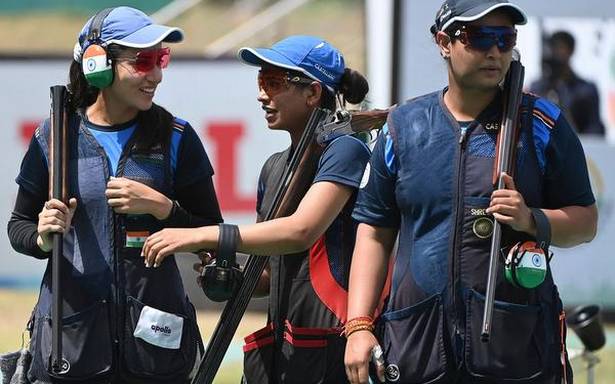 The Indian trio of Shreyasi Singh, Rajeshwari Kumari and Manisha Keer claimed the gold medal in the women’s trap team final after blanking Kazakhstan 6-0 on the last competition day of the ISSF shooting World Cup here on Sunday.

In the gold medal match, the team fielded by the host nation did not break a sweat as it romped to a crushing win over Kazakhstan’s Sarsenkul Rysbekova, Aizhan Dosmagambetova and Mariya Dmitriyenko, taking the number of golds won by India to 14 in the tournament.

The Indian shooters, especially the experienced Shreyasi and Manisha, missed very few shots in the final and proved to be too good for their opponents.

On Saturday, the pair of Shreyasi and Kynan Chenai missed out on a podium finish as they settled for the fourth place in the trap mixed team final of the prestigious tournament.

Thanks to the country’s dominant showing for a major part of the tournament, India continued to lead the standings with 14 gold, nine silver and six bronze for a total of 29 podium finishes.