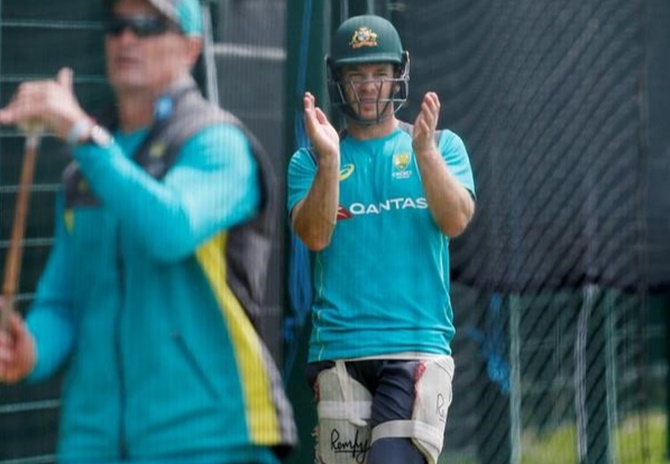 Paine claimed Smith was shadow batting and he was not trying to change Pant’s guard on the final day of the Pink Test against India.

Smith was seen scuffing up the area around the batting crease on day five of the third Test between India and Australia at the Sydney Cricket Ground and the cricketing world instantly questioned Smith — who was suspended from international cricket for 12 months and lost the Australia captaincy — for the ball tampering scandal in South Africa in 2018.

‘I have spoken to Steve about it. He is really disappointed with the way it has come across. If you watch Steve Smith play Test cricket that is something he does every single game five or six times a day. He does this a lot. He is always in the batting crease batting. As we know he has those many Steve Smith quirks. One of them is that he was always marking centre. He was certainly not changing Pant’s guard,’ Paine claimed at a virtual press conference.

‘I imagine if he was, the Indian players would have kicked up a bit of a stink at the time. I have seen Steve do it many times in Tests and games I have played against him. He likes to visualise how he is going to play. Yesterday you could see him up there playing shots as a left-hander to where he wanted Lyon to pitch the ball,’ Paine added, not explaining why Smith would want to shadow bat when he didn’t have to bat anymore in the SCG Test.

Paine also didn’t explain why Smith scuffed up the area around the crease, obliterating Pant’s guard.

‘Steve’s quite upset about it,’ Paine stated. ‘It’s something we always have a laugh about because he just loves batting so much and even when he’s out on the field he’s shadow batting and marking centre. I’m sure if people are happy to look back at the footage you’ll see it happens probably more than once a Test match with Steve.’

‘There’s no way in the world he was trying to change Rishabh Pant’s guard or anything like that,’ Paine claimed. ‘Now that it’s come up as it has it’s something he might have to look at because of the perception of it.’