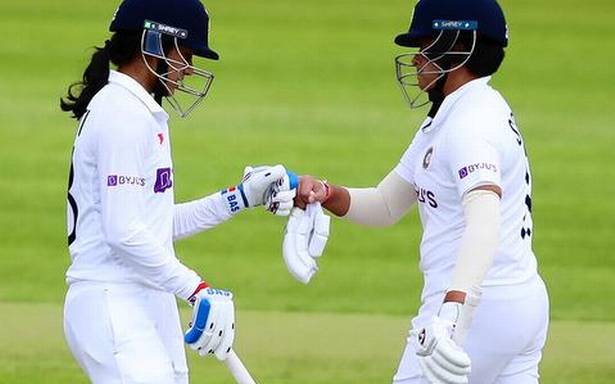 Shafali Verma (96) and Smriti Mandhana (76 batting) provided India a confident start but the visitors still have a mountain to climb after England Women posted a mammoth 396 for nine in their first innings in the one-off Test, here on Friday.

It was the highest-ever total scored by a team against India in Test cricket and the visitors are still trailing by 333 runs with Verma (35 not out) and Mandhana (27 not out) taking India to 63 for no loss at tea on the second day.

Verma was at her usual aggressive self as she cut and pulled in her own inimitable style. The 17-year-old not only presented the straight bat for defence with grace, she also hit a six off Nat Sciver with remarkable ease.

It was only the second six hit by an Indian woman in Test cricket. Mandhana was cautious yet fluent. She got her first boundary when she punched one off Sciver in the cover region. When she got the opportunity, Mandhana did not hesitate to pull. Her elegant drives were a delight to watch.

She raised the team’s fifty with one such well-timed shot off Kate Cross.

Cross missed a chance to dismiss Mandhana (when on 23) when she dropped the left-hander in her follow through.

This was after Indian bowlers were made to put in some hard yards for the second consecutive day.

Debutant Sophia Dunkley (74 not out) led the charge with a resolute unbeaten half-century and two crucial partnerships with tail-enders after England resumed at the overnight score of 269 for six.

Dunkley first added 56 runs for the eighth wicket with Sophie Ecclestone (17) and then forged a 70-run stand with Anya Shrubsole, who punished the Indian bowlers in her career-best 47.

England declared their innings when Shrubsole was bowled by Sneh Rana, who ended up as India’s best bowler with a four-wicket haul.

Shrubsole was aggressive in the post-lunch session, punishing spinner Rana for two hours and a six. She also creamed off boundaries off pacer Shikha Pandey.

In the morning session, England lost overnight batter Katherine Brunt, who was trapped by veteran pacer Jhulan Goswami in the 12th ball of the day.

It remained a short-lived joy for the Indians as Dunkley and Ecclestone dug their heels in to test the patience of the visitors.

Dunkley stood out with her footwork and strokes on the off-side while Ecclestone was comfortable on both front and back-foot.

Dunkley completed after maiden Test fifty soon after getting an umpire’s decision overturned. She was adjudged leg before off the bowling of Rana when she was on 46.

She got to her fifty with a couple off Rana.

Everything seemed to be going in favour of the hosts as the umpire adjudged Ecclestone lbw off Deepti Sharma but the England batter reviewed the call and got the decision overturned.

But a ball later, Ecclestone played uppishly and the ball went straight to mid-on fielder Pandey.

PTI AT AT SSC SSC