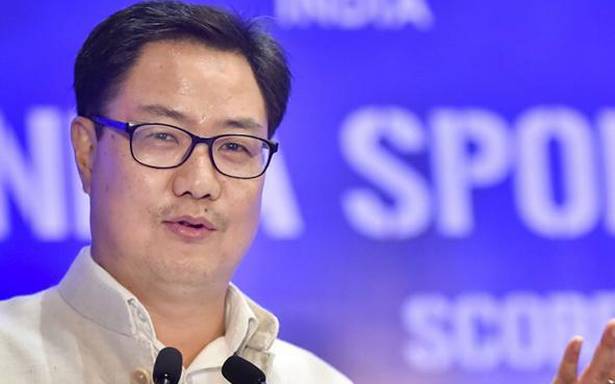 Sports Minister Kiren Rijiju on Saturday announced a ‘Cheer Up’ campaign for the Olympic-bound Indian athletes across the country and urged people to come out in support of the sportspersons, who will be competing at the Tokyo Games beginning July 23.

Over 100 athletes from India have so far qualified for the Games and Mr Rijiju said over 6000 selfie points will be set up in the country for people to show their support.

"I have spoken to Railway Minister Piyush Goyal and he immediately deployed space across 6000 railway stations across the country where Olympics Selfie Points have been set up," Mr Rijiju said at a virtual interaction organised by CII-Sportscom Industry Confederation.

"The Chief Minister of Haryana has also clicked a selfie photograph with the symbol to encourage others to join the campaign and encourage the Tokyo-bound players.

"I wanted the Olympics movement and the importance of Olympics to be understood by everyone, spread across the length and breadth of India. Sports is the biggest soft power of a nation," he said in a release.

Chief national badminton coach Pullela Gopichand said the Tokyo-bound Indian athletes are more confident this time around than their compatriots in the past.

"Today I can confidently say that every member of the team is training to be in their best form and possibly win a medal and if they don’t have a medal or have good performances, I am sure they are going to be very disappointed," he said.

The sports minister also stressed on the role that the government has played along with federations and players in creating a conducive atmosphere for the sportspersons to strive for excellence.

Former hockey international M.M. Somaya said: "We have some of the world’s best coaches involved with hockey these days and our boys and girls are in good hands."