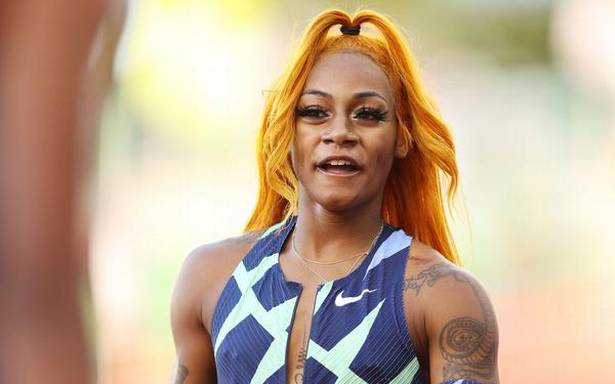 An emotional Sha’Carri Richardson surged to 100m victory at the US Olympic track and field trials in Oregon on Saturday, punching her ticket to Tokyo in 10.86 seconds.

The 21-year-old Texan streaked over the line at Hayward Field and moments later revealed that her win came after a week in which she learned of the death of her biological mother.

A jubilant Richardson leapt into the stands to share an embrace with her grandmother and other family members following her victory.

Javianne Oliver finished second in 10.99sec while Teahna Daniels was third in 11.03.

Richardson is the second fastest woman in the world over 100m this year, running a 10.72sec in April. Only Jamaica’s Shelly-Ann Fraser-Pryce has run quicker, the two-time Olympic champion running 10.63sec in Kingston earlier this month.

In the men’s 100m opening heats, Trayvon Bromell, the fastest man in the world this year, comfortably advanced to the semifinals with a wind-assisted 9.84sec

With World champion Christian Coleman suspended due to a drugs ban, Bromell is widely regarded as the favourite for gold at the Tokyo Olympics after battling back from a series of career-threatening injuries.

“I really believe. Doctors told me I would never run again,” Bromell said. “All I had was my faith.”

Veteran Justin Gatlin, the 2004 Olympic 100m gold medallist who is bidding to make his fourth Olympics at the age of 39, finished second behind Bromell in 9.93sec. “Some days at practice, I feel 39 but I live for this moment,” said Gatlin.

In the women’s 400m, Allyson Felix qualified safely for the final after finishing second in her semifinal in a time of 51.01sec.

Felix, the only woman track athlete to win six Olympic gold medals, is aiming to reach her fifth consecutive Olympics before heading into retirement.

In the women’s 100m hurdles, world record holder Keni Harrison cruised into the semifinals with the fastest time of the heats, clocking 12.49sec.

Other hurdles qualifiers included Brianna McNeal, the reigning Olympic champion who is competing in Eugene despite facing a potentially career-ending suspension for an anti-doping rules violation.