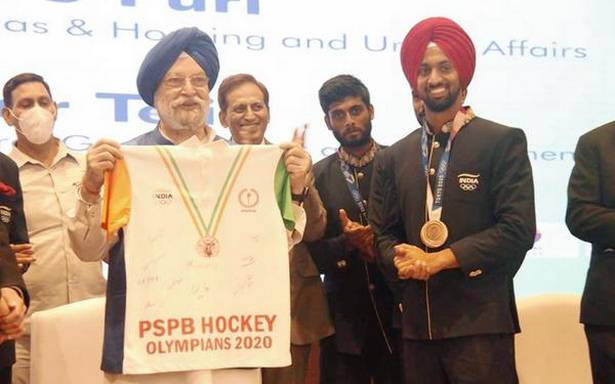 11 players get cash rewards and promotions

In continuation with the felicitation functions for the Tokyo medallists, the Petroleum Sports Promotion Board (PSPB) honoured 11 members of the bronze-winning hockey team here on Friday.

These players, five from Bharat Petroleum and three each from Indian Oil and ONGC, received ₹15,000 each, a silver plaque and more significantly, out-of-turn promotion from their respective employers.

Speaking on the occasion, Minister for Petroleum and Natural Gas & Housing and Urban Affairs Hardeep Singh Puri noted at the outset that the sitting arrangement for the function was not right. He pointed to the players and said, “These stars should have been on the dais and we all should have sat in the audience.”

In the presence of the who’s who of the Petroleum companies, it was indeed an evening for the hockey heroes. The Minister recounted India’s glorious days in the game and assured the increased support for the players.