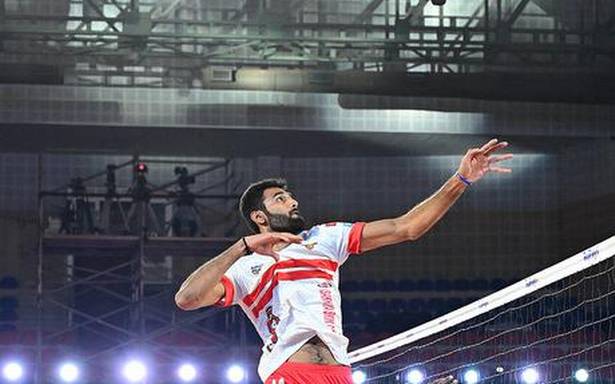 It was a contest which saw the Kolkata outfit come up with a poor display in serving and owed its win to the spiking prowess of ‘player-of-the-match’ and captain Ashwal Rai.

For Calicut, which was without the services of Olympian David Lee, it was an outstanding display by the brilliant spiker C. Ajith Lal, who repeatedly split the rival defence with stunning smashes. Getting solid support from Jerome Vinith, M.V. Sujan Lal, M.C. Mujeeb, K. Rahul at the net, Ajith was exceptional.

With the scores reading two-sets all, the final set saw the lead change sides frequently and Calicut even led 11-8 at one stage only to fritter away the advantage as Ashwal rose to the occasion. Once he jumped up only to fake a spike with roll of the wrists to stun the rival defence.

It was an anticlimax for Calicut after the scores were tied at 13-all. Ajith, who leapt in the air only to see his spike go out to the delight of the Kolkata side which eventually wrapped up the match with Ashwal giving the finishing touch.