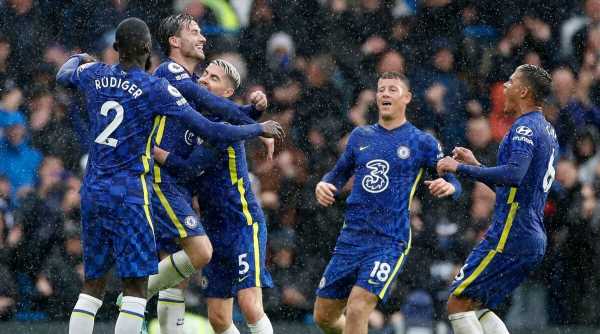 The 3-1 win lifted Chelsea to the top of the table ahead of Sunday's clash between Liverpool and Manchester City. On the other hand, Manchester United were held 1-1 at home by Everton. Chelsea got back to winning ways on Saturday (Oct 2), beating Southampton 3-1 in the Premier League thanks to late goals by Timo Werner and Ben Chilwell after the Saints were reduced to 10 men.

Blues defender Trevor Chalobah put the hosts ahead in the ninth minute but Southampton hit back with a penalty converted by James Ward-Prowse in the 61st minute after Chilwell fouled former Chelsea defender Tino Livramento.

Ward-Prowse was shown a straight red card 16 minutes later for a foul on Jorginho which was picked up by the VAR officials and the game swung back Chelsea’s way.

In the 84th minute Werner scored from point-blank range after a cross by captain Cesar Azpilicueta and five minutes later Chilwell atoned for giving away the earlier penalty by smashing the ball in after a goalmouth scramble.

The win lifted Chelsea to the top of the table ahead of Sunday’s clash between fellow title contenders Liverpool and Manchester City. Winless Southampton remain just outside the relegation zone.

Manchester United was held to a 1-1 draw at home to Everton on Saturday after Andros Townsend’s equaliser cancelled out Anthony Martial’s opener for the home side.

United started off on the front foot with Martial heading wide at the back post and Edinson Cavani forcing Jordan Pickford into a diving save with a firm header from a nicely floated Fred cross.

Everton though was well organised and set up to hit on the break, and the lively Demarai Gray brought David De Gea into action with a good effort after bursting in from the left in the 34th minute.

But it was a deserved lead that United took, two minutes before the interval when Mason Greenwood, showing some excellent touches on the flank, found Bruno Fernandes who expertly fed Martial, the Frenchman’s slightly deflected shot flashing past Pickford.

Solskjaer made a double substitution in the 57th minute, bringing on Ronaldo and Sancho for Martial and Cavani, but the switch did not have the desired effect of finishing the game off.

Instead, Everton hit United on the counter-attack – breaking from a United corner with Gray outmuscling Fred on the left before finding the excellent Abdoulaye Doucoure who in turn slipped it outside to the sprinting Townsend, who fired low past the stationary De Gea.

Both teams are on 14 points, together with leaders Liverpool which faces Manchester City at Anfield on Sunday.