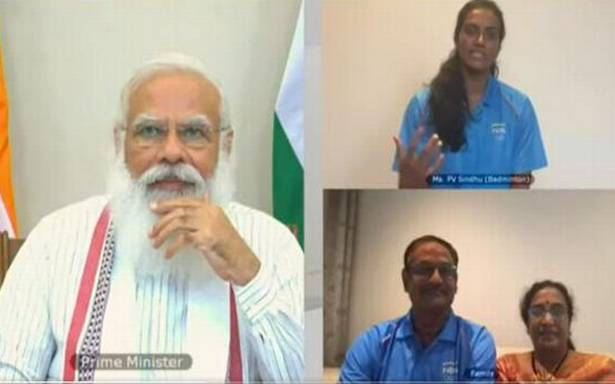 Modi sought to make the athletes feel at ease before they leave for the Tokyo Games, where expectations from them will be high.

Prime Minister Narendra Modi on Tuesday engaged in a lighthearted interaction with India’s Olympic-bound athletes, donning the role of an interviewer to get insights into their journeys.

When the situation demanded, Mr. Modi cited the example of cricket legend Sachin Tendulkar in the 1999 World Cup to boxer Ashish Kumar, whose father died before the Olympic qualifier last year before he battled COVID-19 a few months ago.

And when he realised that he could do with a bit of humour, the PM promised to have ice cream with champion shuttler P.V. Sindhu.

Mr. Modi sought to make the athletes feel at ease before they leave for the Tokyo Games, where expectations from them will be high.

During the interactive session, the Prime Minister jokingly asked Sindhu about her diet restrictions and recalled how chief badminton coach Pullela Gopichand took away her phone and prevented her from having ice cream during the 2016 Rio Olympics.

“There was a ban on eating ice creams on you during the 2016 Olympics, has another ban been imposed for Tokyo?” he asked to a grinning Sindhu, who would be aiming to better the silver she won five years ago.

“Sir, I have to be careful about my diet,” she responded.

Speaking to boxer Ashish, he recalled his struggles in the run-up to the Games, since losing his father, who was a kabaddi player.

“Your father was a kabaddi player. How did you come to choose boxing?” Mr. Modi asked.

“My father wanted me to be a boxer. I come from a family of sportspersons. My brother was a wrestler but I was of a lean frame. So, I decided that I couldn’t be a wrestler and chose boxing,” Ashish said.

“You suffered from COVID. You lost your father as well. How did you cope and continue working hard?” the PM asked.

Ashish replied, “I was emotionally hurt after my father died. My family supported me well through testing times. My friends motivated me that I should work towards fulfilling my father’s dreams.” “When I was in Spain, I had tested positive for COVID. But I was given special facilities. Despite those facilities I took a long time to recover. After returning to India, our sports staff helped me a lot. I got back into rhythm with their help.” Mr. Modi reminded Ashish that Tendulkar “had also lost his father during a tournament”.

“He paid tribute to his father through his game. You have also done the same. You are already a champion and the nation expects a lot from you at the Olympics,” said the PM.

With ace rifle shooter Elavenil Valarivan, Mr. Modi reminded her that she comes from the same vidhan sabha constituency in Gujarat — Maninagar — from where he contested in the assembly elections.

Mr. Modi greeted the Ahmedabad-based shooter in Gujarati and encouraged her to give her best at the Games.

To javelin thrower Neeraj Chopra, Modi said, “I have been told that you got injured, but still you created a new record. You don’t need to get bogged down by expectations, don’t take the burden of expectations, just focus on your goal.” The Olympics, in which on-site spectators will not be allowed owing to the COVID-19 pandemic, are scheduled to be held in the Japanese capital from July 23 to August 8.