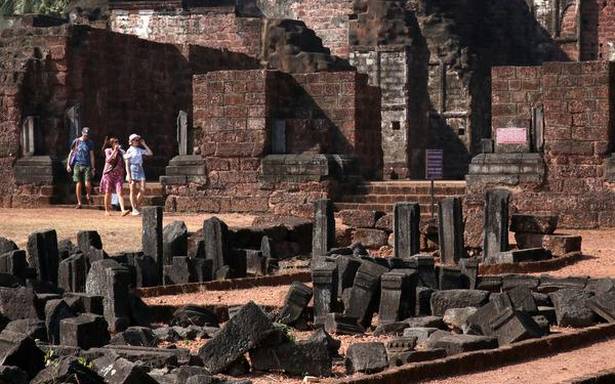 India gifted a part of them to Georgia on July 10. Another part remains in Goa

Almost 400 years after she was murdered in present day Iran, relics of St. Queen Ketevan that were found in Goa in 2005 are likely to be put on display in India as well as her native Georgia, according to Archaeological Survey of India (ASI) officials.

On July 10, External Affairs Minister S. Jaishankar handed over one part of the relics to Georgia as a gift from India. According to senior ASI officials with knowledge of the matter, parts of the bone of the right arm were found at St. Augustine Church in Old Goa in 2005.

Queen Ketevan was killed in 1624 in Shiraz for not converting to Islam and parts of her remains were brought to Goa by Augustinian monks. Revered as a martyr, her relics remained lost till 2005 as the St. Augustine Church collapsed in 1842, another official said. A DNA analysis by the CSIR-Centre for Cellular and Molecular Biology, Hyderabad, confirmed their authenticity in 2013.

The official said the larger part of the relic remained with the ASI in Goa and would be publicly displayed for the first time. The smaller part had been handed over to Georgia, where it was likely to be displayed publicly with the citation that it was a “gift from people of India to people of Georgia”. The larger part of the relic had been sent to Georgia for an exhibition for six months in 2017.

When reached for his comment, Father Loiola Pereira, secretary to the Archbishop of Goa, said: “The relics of the martyred Queen Ketevan were found by the ASI in 2005 in the ruins of the Church of St. Augustine and have ever since been in the possession of the government. We are happy that at least ‘part of the relics’ were handed over by our government to the people of Georgia. St. Queen Ketevan belonged to Georgia and Georgia is where her relics should be.”

Speaking during the handover ceremony in Georgia, Mr. Jaishankar said: “One part of the holy relic still remains in India as a reminder of our shared past. The part which has now come back permanently to Georgia due to the decision made by Prime Minister Narendra Modi will surely inspire generations to come in this land.”