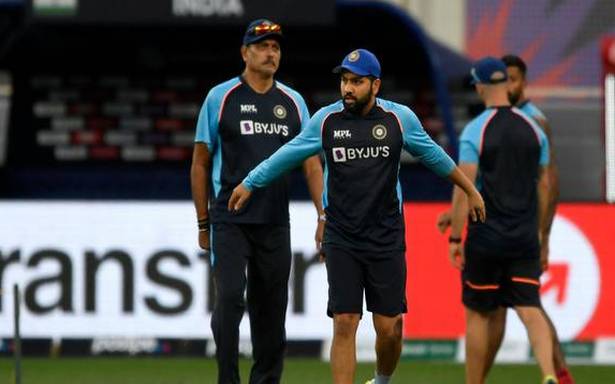 Shastri said Rahul Dravid has “inherited” a great team and will only raise the bar given his stature and experience as it’s still not in “transition”.

The Indian team was “mentally and physically drained” during the T20 World Cup and didn’t even “try to win” as it wasn’t switched on during pressure situations in big games, outgoing head coach Ravi Shastri stunningly conceded before the side’s final match at the showpiece in Dubai on Monday.

Shastri, whose tenure as head coach ended this evening, also said that his successor Rahul Dravid has “inherited” a great team and will only raise the bar given his stature and experience as it’s still not in “transition”.

When Ian Bishop asked on ‘Star Sports’ about the takeaways from the poor campaign during which India lost to Pakistan and New Zealand, Shastri said: “All I can think first of is rest.” “I am mentally drained but I expect that at my age but these guys are physically and mentally drained. Six months in a bubble…What we would have ideally liked was a bigger gap between the IPL and the T20 World Cup…(because) when the big games come, when pressure hits you, you are not that switched on as you should be.” Shastri said that he doesn’t want to cite excuses but the team was not in best shape to even try and win games here.

“It’s not an excuse. we take defeat and we are not scared of losing. In trying to win, you will lose a game but here we didn’t try to win because that X-factor was missing.” The best part about Dravid’s upcoming tenure will be that he has a world class team that is still at least four years away from going into the transition mode, feels Shastri. Dravid’s tenure will start with the home T20 and Test series against New Zealand.

“Absolutely, in Rahul Dravid, we have got a guy, who has inherited a great team and with his stature and experience, he can only raise the bar in times to come,” Shastri said.

“… there’s still a lot of players over here who will play for another 3-4 years which is very important. It is not a team in transition, overnight, it will not change.

“Virat is still there and as leader of the side, he is one of the biggest and best ambassadors of Test cricket,” Shastri as usual was effusive in Kohli’s praise.

“…Lot of credit goes to him in the way he thought about playing the game and how the team has rallied around him.” For Shastri, creating a team that can win Test matches overseas gave him the greatest job satisfaction.

When asked about the high points, he said: “Across all formats, there are plenty but I would say winning in red ball cricket across the globe, winning in West Indies, Sri Lanka, Australia.

“England, we are leading a series, could be the longest lead in history of Test cricket because next Test is next year but I take that and settle for that for 12 months,” he said cheekily referring to the fifth Test that was suspended owing to a COVID-19 outbreak.

“But to beat these sides and every team in red and white ball cricket, we have beaten sides in their den which was my endeavour and the team’s endeavour. You were always labelled as big bullies at home but when we travelled outside, we didn’t have the goods. This team has shown and more and plenty of that.” For Shastri, there is no doubt in his mind that he has made a huge difference.

“When I took up this job, in my mind I wanted to make a difference and I think I have. Sometimes in life it’s not what you accomplish but what you overcome.

“What these guys have overcome over the last five years is they have travelled across the globe and won in every corner of the globe in all formats of the game and irrespective of what happens here, it is one of the great teams of the game. There is absolutely no doubt in my mind.” “It’s unfortunate that we are out of this tournament but that takes nothing away from a great side,” he concluded.