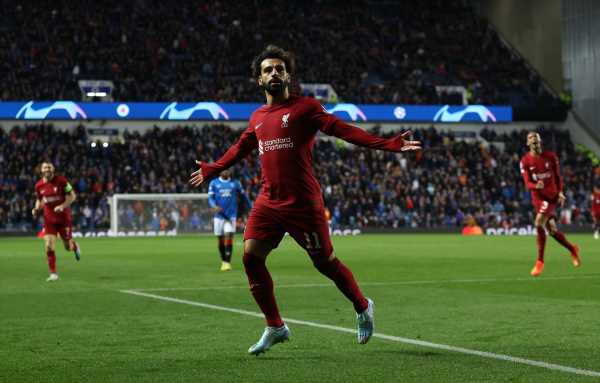 Bayern Munich, Club Brugge and Napoli join Manchester City and Real Madrid in the last-16 of the UEFA Champions League on a night of high drama that saw Mohamed Salah register the fastest-ever hat-trick in the competition.

A round-up of Wednesday’s action in the UEFA Champions League.

Substitute Mohamed Salah scored the fastest hat-trick in Champions League history as Liverpool came from behind to thrash Rangers 7-1 on Wednesday and put themselves on the verge of qualification for the competition’s knock-out stages.

Salah came off the bench in the second half with Liverpool leading 3-1 and fired a treble timed at six minutes and 12 seconds between the first and third goals to turn a hard-fought win into a rout.

Roberto Firmino had dragged Liverpool back into the contest with a double strike and Darwin Nunez was also on the scoresheet before Harvey Elliott rounded off the scoring following Salah’s goals.

It appeared a much-changed Liverpool were in for further frustration in a disappointing season so far as they fell behind for the eighth time in all competitions after Scott Arfield slotted home 17 minutes in to lift the roof off Ibrox.

That lead lasted less than eight minutes, however, as Firmino continued his prolific season with a near-post header to level things up from a corner.

Liverpool were much the better team right from the off in the second half and deservedly edged back in front 10 minutes after the interval, Firmino converting Joe Gomez’s pinpoint low cross to take his goal tally to eight in all competitions. With Rangers chasing the game, a fine finish from close-season signing Nunez put the game beyond the hosts before Salah took centre stage.

Elliott added to the home side’s embarrassment with a late seventh, putting the seal on a victory that means Liverpool are second in Group A, and need just one point from their final two matches to be sure of a spot in the knockout stages, while Rangers are bottom, without a point.

Coming into the match, of the 45 teams to have played at least 50 games in the Champions League, only Anderlecht had a lower win rate than Rangers’ 12 victories in 65 games.

However, you would not have thought it at Ibrox, given how Rangers started. Former Liverpool forward Ryan Kent fired just over before Arfield found the bottom corner for Rangers’ first Champions League goal of the season, and first in 383 minutes in the competition.

The defending from the home side left much to be desired as Liverpool levelled through Firmino, but that was as good as it got for the visitors in the opening period, with Rangers missing several chances to retake the lead.

The second half was a different story altogether, and Rangers completely crumbled as Liverpool improved.

Nunez’s goal was as much to do with the hosts’ poor defending, while Salah was presented with gift after gift having come off the bench for only the final 22 minutes.

Salah’s incredible treble took him to 38 Champions League goals for Liverpool, now the most by any player for an English club in the competition, surpassing Didier Drogba for Chelsea and Sergio Aguero for Manchester City, who both have 36.

The stadium was empty as Elliott stroked home to complete a flattering scoreline for Liverpool, given they had struggled for much of the opening period. Bayern Munich cruised past Viktoria Plzen 4-2, putting them through to the knock-out round of the Champions League after punishing the Czech champions during a ruthless first-half display that produced four goals.

The victory combined with Barcelona’s 3-3 draw with Inter Milan put Bayern through to the knock-out stage while the Czechs, who are bottom of Group C, will exit at the group stage.

The Germans, who have now gone a record-extending 32 group matches in the competition without defeat, struck first after 10 minutes when Sadio Mane played a one-two with Leon Goretzka before putting the ball in the net.

An unmarked Thomas Mueller — who came off midway through the first half with a tight back as a precaution — doubled the visitors’ lead minutes later when he tapped home a cross from Kingsley Coman with only the Plzen keeper near him.

Goretzka, named Player of the Match, nabbed a brace to round off the scoring for Bayern as the Germans kept a toothless Plzen side in check during a clinical opening half and controlled 65 percent of possession throughout the match.

Nagelsmann made a number of changes in the second half and the Germans could not maintain the intensity as they allowed Adam Vlkanova and Jan Kliment to pull goals back for the home side.

Bayern have won all four of their group matches to sit in top spot on 12 points followed by Inter Milan on seven and Barcelona with four.

Plzen remain without a point in the competition. 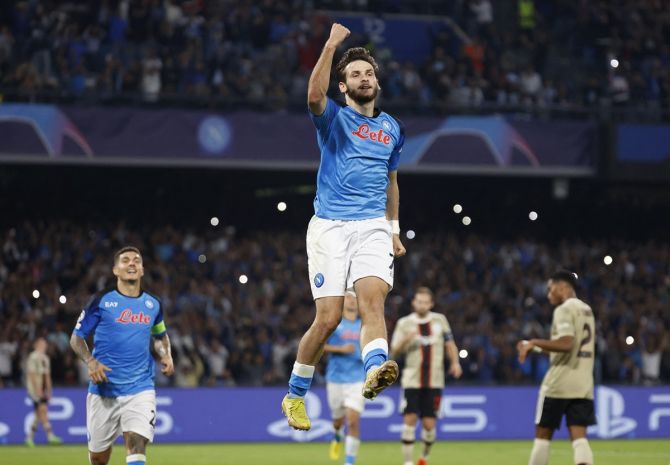 Napoli kept up their 100 percent record in the Champions League group phase and secured progress to the knock-out stages by beating Ajax Amsterdam 4-2 at the Diego Armando Maradona Stadium.

Early goals from Hirving Lozano and Giacomo Raspadori put the Serie A leaders comfortably ahead by the 16-minute mark and Khvicha Kvaratskhelia added a second-half penalty after Davy Klaassen had pulled one back for Ajax.

The Dutch club made a desperate bid for a share of the spoils as Steven Bergwijn converted an 83rd-minute penalty to bring the score back to 3-2 but a bad defensive error allowed Victor Osimhen to score Napoli’s fourth in the final minute.

Napoli’s 12-point haul means they are guaranteed a top-two finish in Group A, having scored 17 goals in four matches with a brand of attacking football that has made them one of Europe’s form sides.

They join holders Real Madrid, Club Brugge and Manchester City as teams through to the round of 16 in February.

Any hopes Ajax had of revenging last week’s 6-1 humiliation at the Amsterdam Arena — their heaviest defeat in European club competition — were dented in the opening salvoes of the match.

Lozano played a quick give-and-go with Piotr Zielinski, heading the lofted return ball into the net as Ajax’s defence were caught static in the fourth minute.

While the Dutch club had several half chances for a quick equaliser, Napoli went down the other end with a flowing run on the left from Kvaratskhelia, who played the ball inside for Raspadori to rifle a powerful shot into the net.

Ajax looked the brighter of the two sides immediately after the break and they got an instant reward when Klaassen headed home from Calvin Bassey’s inch-perfect cross in the 49th minute.

Napoli’s two-goal advantage was restored in the 62nd minute after a VAR review found Jurrien Timber had handled in his area and Kvaratskhelia converted the resultant spot-kick.

Ajax were awarded a penalty of their own seven minutes from time which offered them hope of snatching a point when substitute Brian Brobbey was brought down and Bergwijn scored from the spot.

But those hopes were extinguished in the last minute when Daley Blind was dispossessed by Osimhen as the Nigerian striker marked his return from injury with a goal.

Club Brugge in knock-outs after draw with Atletico 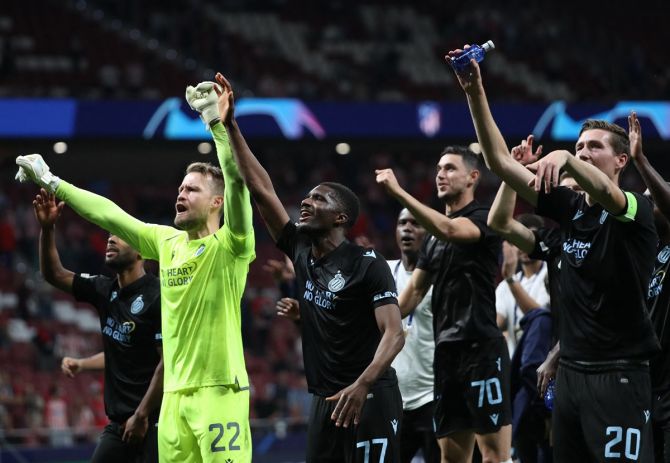 Belgian side Club Brugge reached the Champions League knockouts after a 0-0 draw against Atletico Madrid guaranteed them a top-two spot in Group B.

After becoming the first Belgian side to win their opening three group games last week, Brugge reached the round of 16 in Europe’s elite club competition for the first time since 1990-91, when it was known as the European Cup.

Atletico squandered a string of chances as they extended their winless streak in the competition to three games.

The Spanish side are second on four points, six behind the Belgians and one ahead Porto and Bayer Leverkusen, who have a game in hand and will play each other later on Wednesday.

Atletico now will face two must-win games against Leverkusen and Porto to stay alive in the competition.

Brugge were lively in the first half but ran out of steam after the break and then held on in the closing stages as Atletico tried in vain to open up the visitors, who had Kamal Sowah sent-off late on.

Former Liverpool goalkeeper Simon Mignolet was named player of the match after he made a series of stops in the second half, including two close-range saves in added time to deny Alvaro Morata.

The Argentinian manager instead opted to start Antoine Griezmann and Angel Correa up-front, bringing Morata and Matheus Cunha on from the bench later on.

But Brugge attacked Simeone’s defensive block and constantly broke their lines with dangerous through balls and quick counters in the first half.

The hosts almost scored in the 20th minute after a one-touch passing combination between Griezmann and Correa, with the Argentinian’s low strike going narrowly wide.

The Frenchman was denied by Mignolet in the 26th minute, having a low shot blocked by the goalkeeper’s right foot.

Saul Niguez had a goal ruled out for offside in the build up a few minutes later.

With Atletico in control, Brugge were awarded a penalty but the decision was overturned by the VAR as Tajon Buchanan stepped on Nahuel Molina’s ankle before the Argentinian tripped him inside the area.

Atletico had another goal ruled out right after the break when Angel Correa was adjudged offside.

The hosts dominated possession late on and applied relentless pressure after Sowah was shown his second yellow card for kicking the ball into the stands after play had stopped.

Yet Mignolet made several saves to keep the game goalless and seal Brugge’s qualification.