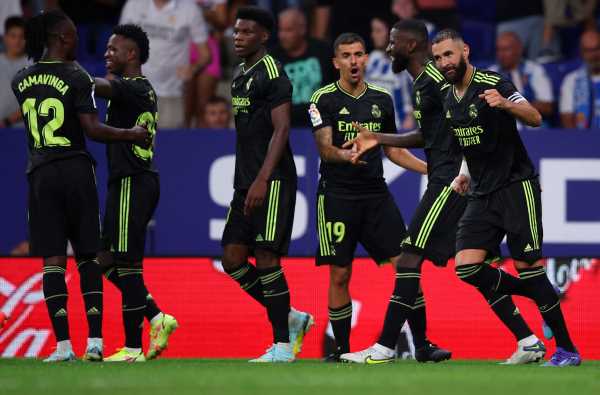 Karim Benzema scored twice in the final few minutes to give Real Madrid a 3-1 win at Espanyol on Sunday, their third in the first three games of the new LaLiga season.

Real Madrid sit top of the table on nine points, level with Real Betis. Barcelona and Villarreal are right behind on seven points, with Osasuna and Real Sociedad on six.

Vinicius Jr opened the scoring early in the first half with a first-touch finish from a brilliant pass by Aurelien Tchouameni.

The young French midfielder put in another solid performance in place of the departed Casemiro, who left the club after signing for Manchester United.

Tchouameni added an extra dimension to the Real midfield and showed why they agreed to pay a potential 100 million euros ($99.49 million) fee to Monaco for the 22-year-old France international.

Real were in control until Joselu levelled from a rebound right before halftime and, roared on by their fans, Espanyol put up a fight against the Champions League and LaLiga champions, dominating most of the second half.

Javi Puado almost put the home team in front after collecting a good pass inside the box, but his shot ended up being blocked by a defender for a corner.

In the 58th, keeper Thibaut Courtois pulled off a fantastic one-handed stop to keep out Joselu’s close-range shot.

As Espanyol upped the aggression, Real coach Carlo Ancelotti brought on youngsters Rodrygo and Eduardo Camavinga and they started to turn the match in Real’s favour, especially on the counter-attack.

Benzema had a great opportunity but was denied by keeper Benjamin Lecomte, put another effort wide, and had a goal ruled out by the video assistant referee on a really close offside call.

Yet two minutes from time, Rodrygo found Benzema at the far post with a perfect cross and the French striker put Real Madrid back in front.

In added time, the video assistant referee spotted a foul by Lecomte on Dani Ceballos in what was considered a clear goal-scoring opportunity on the edge of the area.

Lecomte was shown a straight red card and Benzema took charge of the free kick, bending it into the bottom corner to wrap up the points.

“It was not easy and it will not be easy,” coach Carlo Ancelotti told Movistar Plus.

“We started very well, we scored but then we went down. After their goal, it was more complicated. It ended in a two-way match and we were very good.

“We were spot on with the changes we made. Rodrygo and Camavinga gave us the energy that we needed.”

Lewandowski at the double again as Barcelona stroll past Valladolid 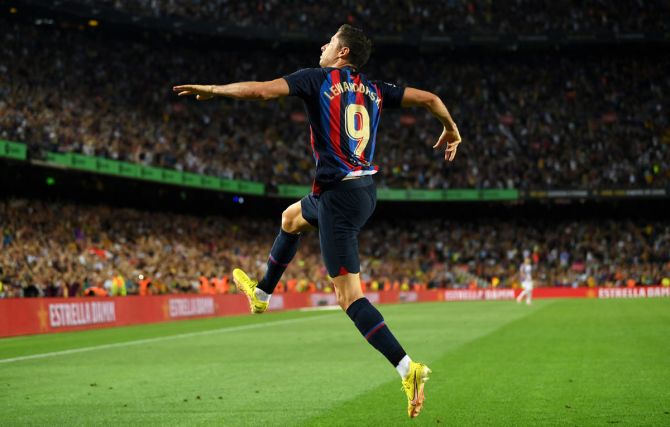 Robert Lewandowski scored his second consecutive brace as Barcelona breezed past Real Valladolid with a comfortable 4-0 LaLiga victory on Sunday.

It was Barca’s second win from three games in the new season and moved them up to second in the table with seven points, two behind leaders Real Betis and provisionally one ahead of Real Madrid, who face Espanyol later on Sunday.

After enduring a frustrating goalless draw in their opening game of the season against lowly Rayo Vallecano, Barcelona enjoyed a confidence-boosting 4-1 win over Real Sociedad last week, in which Lewandowski got off the mark for the campaign with two goals.

Against Valladolid they maintained the momentum and were finally able to deploy French defender Jules Kounde, who missed the first two games of the season with Barca unable to register him as a player as they struggled to comply with LaLiga’s Financial Fair Play (FFP) rules.

Kounde played from the start on Sunday and had a solid showing, as Barca dominated the game and never gave Valladolid a chance. Lewandowski and Ousmane Dembele both went close for Barca, hitting the post in the first half, but it did not take long for them to open the scoring, as Lewandowski stroked home from close range from a perfect Raphinha cross to the far post in the 24th minute.

Barcelona extended their lead right before halftime through Pedri, who riffled a curling strike into the top-left corner after a nice pass by Dembele from the right touchline.

Lewandowski scored Barca’s third in the 65th minute, with a brilliant back-heel that deflected off a defender before beating goalkeeper Jordi Masip.

The Poland striker had a golden opportunity to complete a hat-trick in added time, but Masip made a great stop to keep out his close range shot.

Substitute Sergi Roberto, however, was in the right place at the right time to strike home the rebound and wrap up the points.

“It was a complete game but far from perfect,” Barca coach Xavi Hernandez told DAZN.

“We gave them too many chances at the end, you just can’t afford to relax in this game.

“Even going 3-0 we have to keep pushing but we’re happy. I can’t demand more effort from them than they have done.”

PSG drop points for the first time this season 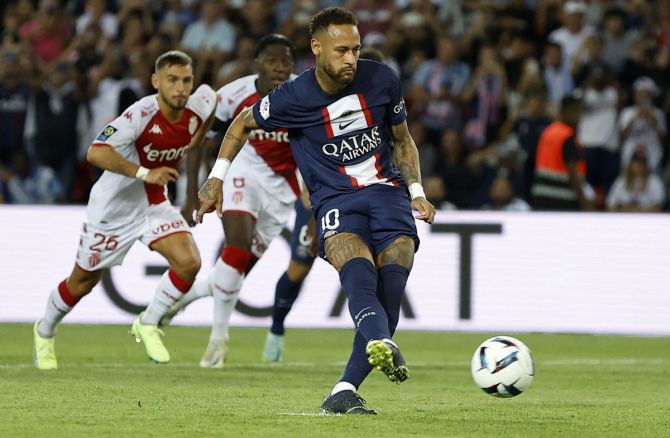 Paris St Germain dropped their first points of the Ligue 1 season as they were forced to come from behind to draw 1-1 at home with Monaco on Sunday.

The champions lead the standings with 10 points from four matches. They are level on points with Olympique de Marseille and Racing Lens.

Olympique Lyon scored a 86th minute equaliser though Moussa Dembele as they drew 1-1 at Stade Reims. Lyon are fourth with seven points.

Montpellier snapped a two-match losing run as they secured their biggest ever Ligue 1 victory by thumping Stade Brest 7-0 despite the absence of suspended captain Teji Savanier.

Faitout Maouassa, Sepe Elye Wahi and Wahbi Khazri scored inside 11 minutes, with Nicolas Cozza and Elye Wahi adding two more for Montpellier within the next 20 minutes.

Brest were down to 10 men early in the second half when Pierre Lees-Melou was sent off before Montpellier added two more through Valere Germain.

Lorient moved up to fifth place as they edged Clermont 2-1 with two first half goals from Terem Moffi, including an early penalty. Clermont pulled one back in the second half through Muhammed Cham despite playing most of the half down to 10 men when Neto Borges was sent off in the 48th minute.

After three successive defeats, Troyes beat Angers 3-1, with goals from Renaud Ripart, Mama Balde and Wilson Odobert to record their first points of the campaign.

Angers, who have yet to win this season, had Batista Mendy sent off for a second yellow card as early as the 21st minute.

Nantes came from a goal down to secure a 3-1 win over Toulouse. Evann Guessand, Mostafa Mohamed and Moses Simon netted for Nantes. 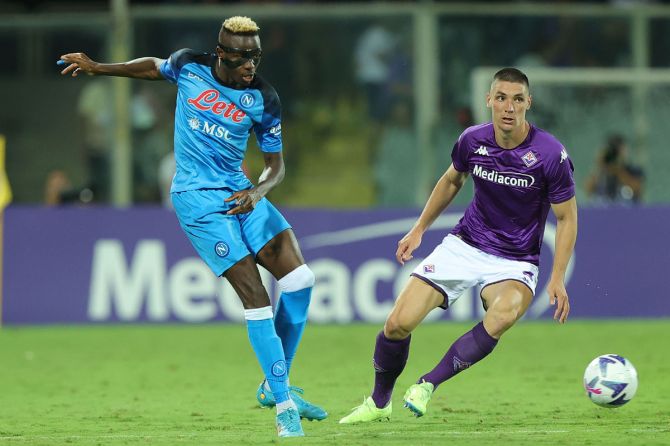 Napoli were held to a 0-0 draw at Fiorentina in Serie A on Sunday as the two sides kept pressing but failed to break the deadlock.

Fiorentina winger Riccardo Sottil’s long-range effort in the 24th minute was saved by Napoli keeper Alex Meret, and Giacomo Bonaventura followed up by striking just wide of the post after pouncing on a poor defensive clearance.

Napoli striker Victor Osimhen found the net in the 43rd minute but his effort was immediately ruled out for offside.

Napoli forward Giacomo Raspadori was twice denied by keeper Pierluigi Gollini, who kept out a powerful effort in the 74th minute from inside the box and a long-range strike eight minutes later.

Napoli top the Serie A table as one of six teams with seven points from three games and will host Lecce on Wednesday, while Fiorentina, who have five points, travel to Udinese on the same day.

Atalanta beat Verona 1-0 away earlier on Sunday and are also on seven points.

The hosts dominated the first half, but a left-foot shot from midfielder Teun Koopmeiners turned match in Atalanta’s favour in the 50th minute and sealed the victory.