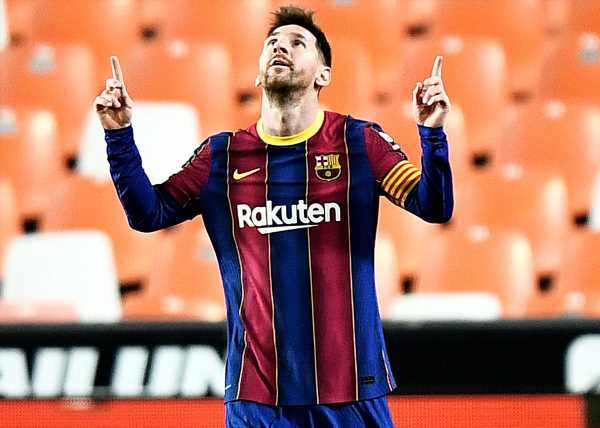 Lionel Messi scored a 50th freekick goal for Barcelona as he led his side to a quick-fire comeback to win 3-2 at Valencia on Sunday and keep the pressure on La Liga title rivals Atletico Madrid and Real Madrid.

With coach Ronald Koeman serving a touchline ban, Barca fell behind in the 50th minute when Valencia defender Gabriel Paulista headed home from a corner after keeper Marc-Andre ter Stegen had stumbled in his attempt to come for the ball.

The Catalans, who had blown the chance to go top of the league with a shock 2-1 defeat at home by Granada on Thursday, where Koeman was sent off, reacted well to going behind and soon won a penalty thanks to a handball from Valencia’s Toni Lato.

Messi saw his spot-kick saved by former team mate Jasper Cillessen but Valencia failed to clear the danger and the Argentine followed up to score on the second rebound in the 57th minute.

Antoine Griezmann gave Barca the lead six minutes later, also netting on the rebound after Cillessen could only parry a header from Frenkie de Jong.

Messi looked to have clinched the points in the 69th when he fired a set-piece in off the post to score his 28th league goal of the season and bring up a half century of freekick strikes.

Valencia got back into contention out of nowhere when midfielder Carlos Soler scored with an unstoppable strike from long range in the 83rd.

Barca are third on 74 points with four games remaining, level with second-placed Real Madrid and two behind leaders Atletico Madrid after both sides won on Saturday. Fourth-placed Sevilla, on 70, host Athletic Bilbao on Monday.

“We know that we won’t have any easy games until the end of the season but we got the job done after the unexpected defeat to Granada. We competed today and are going to keep competing,” said Barca defender Gerard Pique.

Valencia were left 14th in the standings and are still not completely out of the relegation battle, sitting six points above the dropzone.

Javi Gracia’s side had held Barca to a 2-2 draw at the Camp Nou in December and they kept the Catalans on their toes for the final few minutes after Soler’s pile-driver, having a couple of half chances to equalise.

But Barca clung on for the win to ensure they head into next Saturday’s crunch game at home to Atletico knowing they will unseat the leaders at the top with a victory. Real then host Sevilla on Sunday to complete a huge weekend in the title race.

“We’re still alive,” added assistant coach Alfred Schreuder, who is taking charge of the team during Koeman’s touchline ban, which will also make him miss the game with Atletico.

“We’re not looking at the other teams, we’re only interested in ourselves and we believe our players can go on and win the league.” Inter Milan clinched their first Serie A title in 11 years on Sunday after Sassuolo drew 1-1 with second-placed Atalanta to assure Antonio Conte’s side of the league crown.

Inter are 13 points clear in first place with four games remaining, and their triumph ends a run of nine consecutive title wins for Juventus.

Large crowds of flag-waving fans gathered outside the iconic Duomo in Milan to celebrate a long-awaited success that has broken the domestic dominance of rivals Juve.

The league title is Inter’s first since winning the Serie A, Coppa Italia and Champions League Treble in 2009-10 under Jose Mourinho, and their 19th overall.

Inter have therefore overtaken AC Milan, who have 18 Serie A titles, to become the second-most successful club in league history behind Juventus, with 36 league wins.

They improved on a runners-up spot in Conte’s debut season in 2019-20, when Inter finished one point behind Juventus and were beaten 3-2 by Sevilla in the Europa League final.

Conte celebrates the fourth Serie A title of his coaching career, after guiding Juventus to the first three crowns of their nine-year run between 2011 and 2014.

“This is definitely one of the most important successes of my career,” Conte told 90th Minute.

“It was not an easy choice to come to Inter, when the team was not competitive enough to win something important.

“I accepted the challenge and I think we have been repaid for all the great sacrifices we have made.”

Juve have struggled this season under rookie coach Andrea Pirlo and are involved in a fierce battle to qualify for next season’s Champions League.

The Turin club are currently third with 69 points, 13 behind Inter at the top of the table.

“Well done Steven! Happy for you and proud of being your loyal opponent on the pitch and friend off the pitch. We’ll be back…,” he wrote.

Conte’s side have looked destined to claim the league crown for most of the season after showing a level of relentless consistency that their rivals could not match.

Inter have topped the league standings for the last 13 rounds since beating Lazio 3-1 on Feb. 14.

However, their Champions League campaign was a disaster, as they finished bottom of a group with Real Madrid, Borussia Monchengladbach and Shakhtar Donetsk, but Conte believes the failure spurred his players on.

“The key moment of the season was when we went out of the Champions League,” he said.

“We received a lot of criticism, it was excessive. We did well to use that criticism, because this group was not used to winning.”

Inter are unbeaten since Jan.6, a run of 18 games, and became the first Italian side to begin the second half of a Serie A season with 11 consecutive wins between Jan. 30 and April 11.

The strike partnership of Romelu Lukaku and Lautaro Martinez has been crucial to their success, with the pair scoring a combined 36 league goals.

Inter also boast the best defensive record in the league with 29 goals conceded in 34 games.

In the decisive match, Atalanta goalkeeper Pierluigi Gollini saw red after 22 minutes, but the Bergamo club went in front 10 minutes later through a Robin Gosens strike.

Sassuolo equalised early in the second half through a Domenico Berardi penalty, but the hosts were then also reduced to 10 men when Marlon earned a second yellow and conceded a penalty.

However, Luis Muriel’s spot kick was saved by Andrea Consigli.

Inter defeated Crotone 2-0 on Saturday to move up to 82 points, and Atalanta’s draw ensured it was mathematically impossible for any of the chasing pack to catch them. Two late goals from Cristiano Ronaldo earned Juventus a 2-1 comeback win against Udinese on Sunday to give the Turin club a precious three points in the Serie A top-four race.

Juve climbed into third place on 69 points, level with Atalanta in second and AC Milan in fourth, but two points ahead of fifth-placed Napoli.

“We made life complicated for ourselves yet again, but the team showed great desire to bring the result home,” Juventus coach Andrea Pirlo told Sky Italia.

“There is fatigue, mental fatigue. When you are used to winning the league, not fighting for the Champions League, something changes in everyone’s minds.

“But our goal has been changed for a few weeks, we must qualify for the Champions League at all costs.”

The visiting defence was caught napping when Udinese wing back Nahuel Molina latched onto a quickly taken freekick to fire home the opener after 10 minutes.

But Rodrigo De Paul stuck out an arm to block a Ronaldo freekick with seven minutes remaining and the Portuguese converted the resulting penalty to end his run of three games without a goal.

Ronaldo then headed in an 89th-minute winner from close range to take his tally to the season to a league-high 27 Serie A goals in 30 appearances.

But the striker’s goals papered over the cracks of another poor performance from Pirlo’s team.

“If we are satisfied with these 10 minutes, it means that we have not understood anything,” Juve defender Leonardo Bonucci told Sky Italia.

“We can’t change gear and keep it up for the whole game, that is the hardest thing to understand.

“Matches are decided by episodes, after this many games you need to pay attention to the details. We have dropped points too many times because of the details.”

Juve knew before kickoff that they had the chance to gain ground in the top-four race after Atalanta and Napoli drew against Sassuolo and Cagliari respectively.

But they got off to the worst possible start when De Paul found Molina with a quick freekick, and he drilled in a finish.

It was the tenth consecutive league game in which Juve have conceded at least one goal, their worst record since April 2010.

Juve’s Weston McKennie was left punching the ground in frustration after heading wide from six yards and Paulo Dybala’s deflected shot required a smart save from Simone Scuffet.

But the visitors’ chances were few and far between until Ronaldo’s decisive contribution in the closing stages.

De Paul’s handball gave the Portuguese forward the chance to fire a penalty into the bottom corner, and the 36-year-old turned the game on its head when he nodded in an Adrien Rabiot cross at the back post.