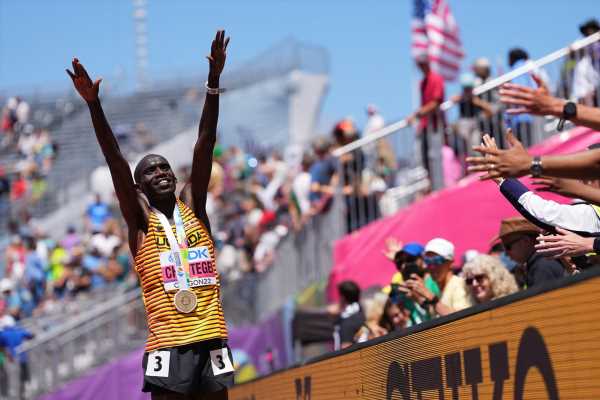 Images from the World Athletics Championships on Sunday, Day 3, in Oregon.

Uganda’s World record holder Joshua Cheptegei showed he had learned his Olympic lesson as he delivered a tactical masterclass to win a second successive world 10,000 metres gold in a superb race at the World Athletic Championships in Oregon on Sunday.

Last year in Tokyo Cheptegei kept his powder dry until the bell, only to be outkicked by Selemon Barega. On Sunday he started upping the ante with over a kilometre to go, throwing in laps of 64 and 63 seconds to stretch a group of eight as they hit the bell.

He then continued to press and though there was a mad scramble behind him that had the healthy Hayward Field crowd roaring in appreciation, he was strong enough to hold the field off and come home in 27:27.43 seconds. 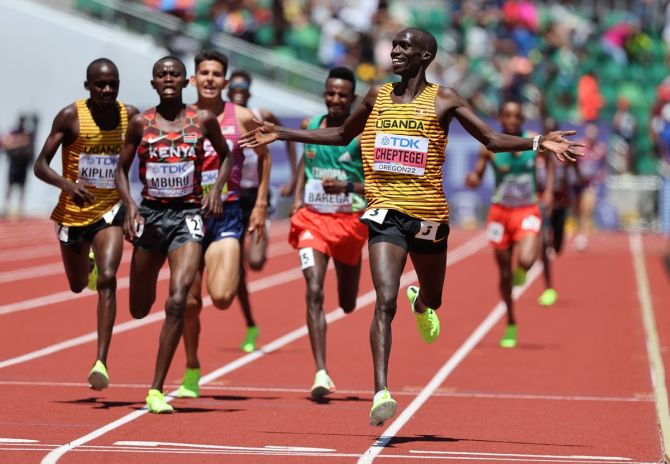 Kenya’s Stanley Mburu, who took a heavy fall on the first lap, recovered well to finish second in 27:27.90. Jacob Kiplimo, 21, who was third in Tokyo, claimed another bronze for Uganda in 27:27.97.

“I knew that if I get into the last fight, I can control it and I could speed it up,” said Cheptegei, still only 25 but who made his world championship debut back in 2015.

“I did not aim to run really fast because of the heat, the sun was very strong, but I was able to get stronger and keep it faster and faster.”

Fast-finishing Grant Fisher just ran out of track in his bid to win a first medal in the event for the United States, finishing fourth, with Ethiopia’s Olympic champion Barega unable to repeat his Tokyo fireworks as he ended up fifth.

Cheptegei, who also took a silver in the event in 2017 and who won Olympic gold over 5,000m last year, will now attempt the elusive double when going again over 5,000 later in the week in Eugene.

“It was very emotional for me to come back to the USA where I started my international career in 2014 (winning the world junior 10,000m title in Eugene),” he said. “Now, I want to continue my dominancy in the long distance running and I hope I will manage it.” 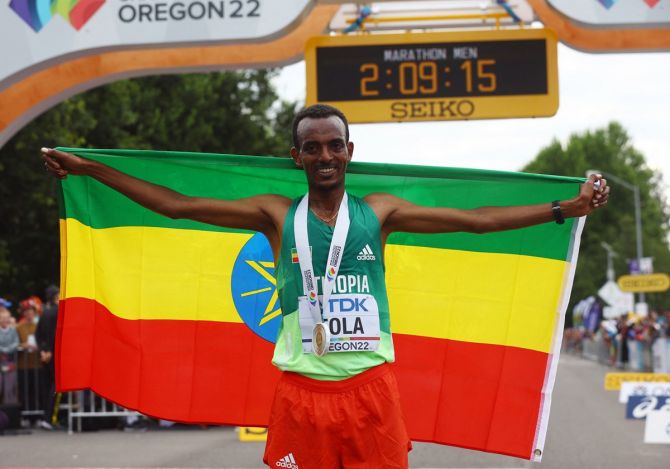 Ethiopia’s Tamirat Tola won the World Championship men’s marathon in dominant fashion on Sunday as he forged powerfully clear around 34km to come home more than a minute ahead to take gold in a championship record two hours, 05.37 minutes.

Taking advantage of relatively cool conditions afforded by the 6.15 am local start time, the 2017 silver medallist splintered the pack with a sustained acceleration and by 39km he was safely 46 seconds clear and continued to press all the way home.

Over a minute back in 2:06.44, Mosinet Geremew made it an Ethiopian 1-2 for the second World Championship in a row with his second successive silver. Belgium’s Somalia-born Bashir Abdi matched his bronze from the Tokyo Olympics in 2:06.48, taking his country’s first medal in the event for men or women.

All three men were inside Abel Kirui’s 2003 championship record of 2:06.54 in Paris, though championship marathon time comparisons bear little scrutiny due to course differences. 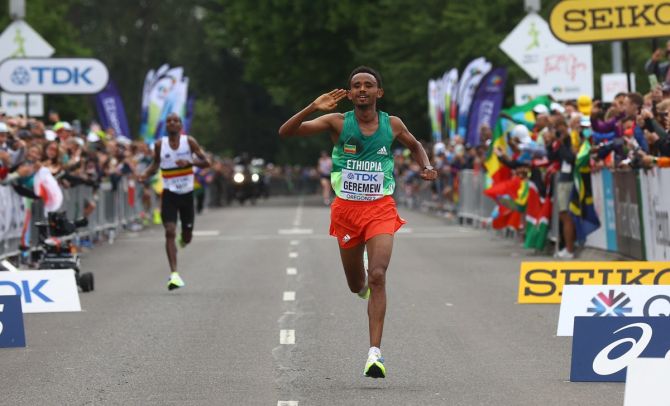 The early pace was brisk, but manageable, keeping a pack of over 30 together at halfway, but Ethiopian defending champion Lelisa Desisa wasn’t one of them as he fell off the back and eventually dropped out.

American favourite and former University of Oregon runner Galen Rupp was next to slip back, much to the disappointment of the fans lining the three-lap course, which was also livened up by large numbers on bikes accompanying the runners.

Tola, 30, made what turned out to be the decisive move soon after, escaping solo to almost immediately open a 12-second gap at 35km and splintering the pack on the back of a 2.44 minute kilometre.

From then on, looking relaxed throughout, he steadily built the lead as the chasing group was reduced to three.

He waved to the crowd over the last few hundred metres, enjoying the biggest win of his career.

“It was a dream come true,” Tola said. “I learned from my mistake in 2017 (World Championships) and I made sure it did not happen again.”

Geremew broke clear for second and Abdi was just behind him. Canada’s Cameron Levins delivered a late surge to take fourth in a national record of 2:07.09, with Kenya’s Geoffrey Kamworor, back racing after suffering a badly broken leg after being hit by a motorbike during a training run in 2020, finishing fifth. 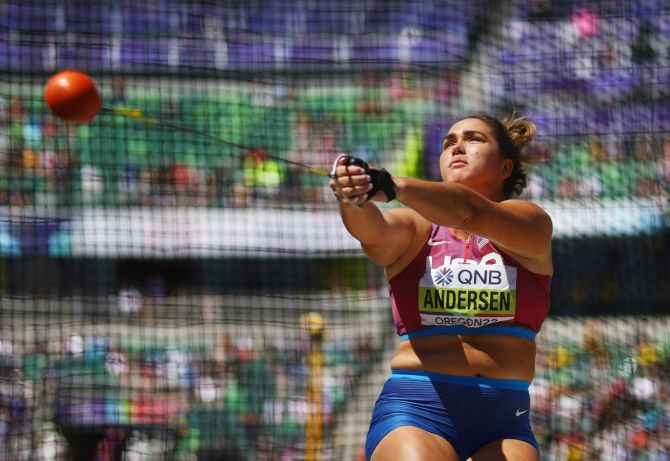 American Brooke Andersen secured a crushing victory in the hammer throw on Sunday, taking World Championship gold with a throw of 78.96 metres.

Cool and calm Camryn Rogers briefly had the lead after her best attempt of 75.52 metres in the third round but Andersen trounced her on the fourth throw with 77.42 metres, forcing the Canadian down to the second spot on the podium.

Andersen kept the gold even further out of reach as she threw 77.56 on her fifth try and let out a cry as she beat that effort with her final throw to cheers from the home crowd, as compatriot Janee Kassanavoid finished third.

“It hasn’t really quite set in yet. I was looking out across the field and I thought to myself, I’m a world champion,” said Andersen.

Four-times world champion and three times Olympic gold medallist Anita Wlodarczyk of Poland was out with injury, while reigning champion DeAnna Price of the United States opted out after a COVID-19 infection derailed her preparations, leaving a wide open path to the podium. 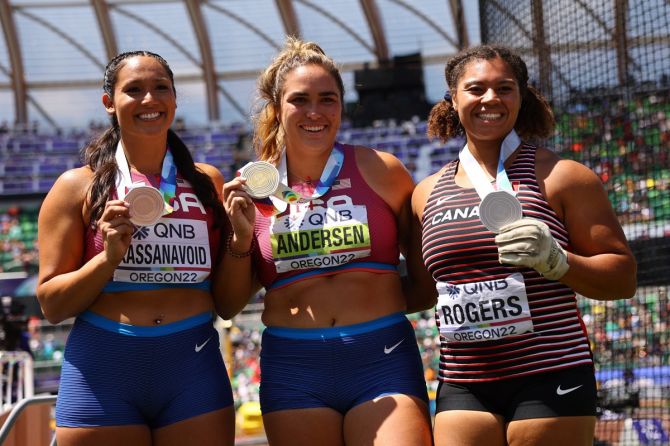 It was the first time that Poland has not won a women’s hammer medal at the worlds since 2011.

“I’m just very fortunate to have the competition I did have,” said Andersen.

“I knew if I stayed in it and focused on the little things I could control and hopefully the performance would get better and be a gold medal.”

It was the second field triumph for the United States in Eugene, Oregon, after Chase Ealey collected the Americans’ first women’s world shot put title in spectacular fashion on Saturday.

While she was unable to improve on her second attempt of 74.86, Kassanavoid said she was proud to round out the North American podium triple and add to the United States’ medal count.

Rogers claimed Canada’s first world hammer medal and the 23-year-old said she gained energy off the support of the crowd.

“Being able to bring home this medal for Canada means the world to me,” she said. “I know this isn’t the end of the journey.”