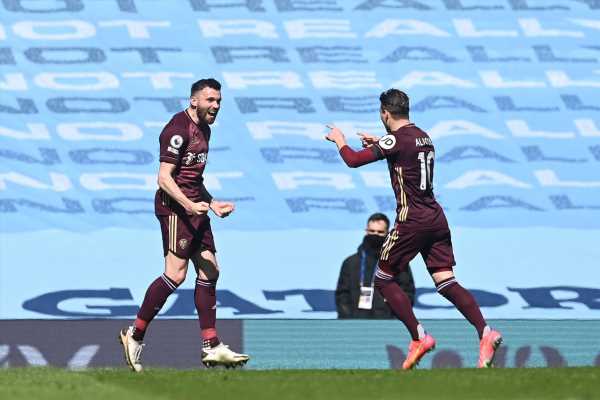 Images from Saturday’s action in the Premier League.

Pep Guardiola fielded a much-changed City side, which struggled to get going in the first half, Leeds taking a surprise lead in the 42nd minute when full-back Dallas drove the ball home off the post with the visitors’ first shot.

Leeds’s joy was short-lived, however, as a VAR intervention saw their captain Liam Cooper sent off just before the break for a dangerous looking challenge on Gabriel Jesus.

The depleted visitors then defended en masse, with City struggling to break through, but Ferran Torres broke their resistance in the 76th, levelling the score with a fine finish.

The drama was not over, however. As City threw everything at Leeds in search of a winner, the visitors broke at pace, with Dallas racing through to grab a sensational victory for Marcelo Bielsa’s side in the 91st minute.

The result ended City’s six-game winning streak in all competitions as they remained on 74 points, 14 clear of second-placed Manchester United at the top of the standings having played two more games, while Leeds moved up to ninth on 45.

“We defended really well and kept them to very few good chances. We knew if we could have a bit more composure we could get one chance.”

Guardiola made eight changes to the side, which beat Borussia Dortmund 2-1 at The Etihad in their Champions League quarter-final first leg last week, with the return match on Wednesday clearly in the Spaniard’s mind. Bielsa described Guardiola, who once said the Argentine was the best coach in the world, as “magical” this week, but it was City’s makeshift defence who looked spellbound late in the first half as Dallas broke the deadlock.

However, the first dismissal Leeds have suffered in the top flight since May 2004, after referee Andre Marriner changed his original yellow card decision to a red having had a look at the pitch side monitor, brought them back down to earth.

With Illan Meslier making several saves in the away goal, City looked like they were in for a frustrating afternoon in front of goal before an incisive pass from Fernandinho split the Leeds defence, Bernardo Silva laid it off, and Torres levelled.

Leeds did not capitulate, however, and continued to commit bodies forward, with their attacking approach rewarded as Dallas still had the energy to outrun the City defence and calmly score to spark scenes on jubilation on the visiting bench.