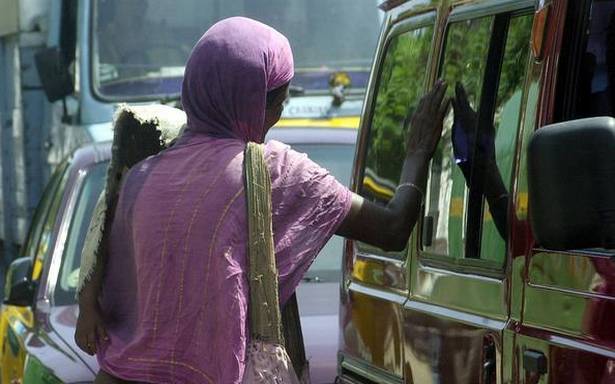 The Supreme Court has asked the Centre and four States to file their response within three weeks on a plea seeking a direction to repeal the provisions criminalising begging.

A Bench of Justices Ashok Bhushan and R. Subhash Reddy noted in its order on Friday that though a notice was issued to Maharashtra, Gujarat, Punjab, Haryana and Bihar on the plea on February 10 this year, only Bihar had so far filed its response.

The top court has posted the matter for hearing after three weeks.

The top court, in February, sought a response from the Centre, and five States on the plea which claimed that the sections of the statute criminalising begging were violative of constitutional rights.

The plea filed by Meerut resident Vishal Pathak has referred to the August 2018 verdict of the Delhi High Court which had decriminalised begging in the national capital and said provisions of the Bombay Prevention of Begging Act, 1959, which treats begging as an offence cannot sustain constitutional scrutiny.

“The provisions of the statutes criminalising the act of begging put people in a situation to make an unreasonable choice between committing a crime or not committing one and starving, which goes against the very spirit of the Constitution and violates Article 21 i.e. Right to Life,” said the plea, filed through advocate H.K. Chaturvedi.

Referring to the Census 2011, the plea has said the total number of beggars in India is 4,13,670 and the number has increased from the last census.

It said the government had the mandate to provide social security to everyone and ensure that all had basic facilities, as embedded in the Directives Principles of State Policy in the Constitution.

“However, the presence of beggars is evidence that the state has failed to provide these basic facilities to all its citizens, thus instead of working on its failure and examining what made people beg, criminalising the act of beggary is irrational and against the approach of a socialist nation as embedded in the preamble of our Constitution,” the plea has claimed.

It has said that a person, who is compelled to beg due to certain circumstances, cannot be faulted for his actions.

The plea has claimed that The Abolition of Begging and Rehabilitation of Beggars Bill 2018 had been introduced in the Lok Sabha but “till date, this bill is not passed and is wedged in length parliamentary procedures, that has resulted in thousands of poor facing more hardships because of present arbitrary statutes”.

It has also sought to declare all other similar Acts prevailing in any part of the country as illegal.