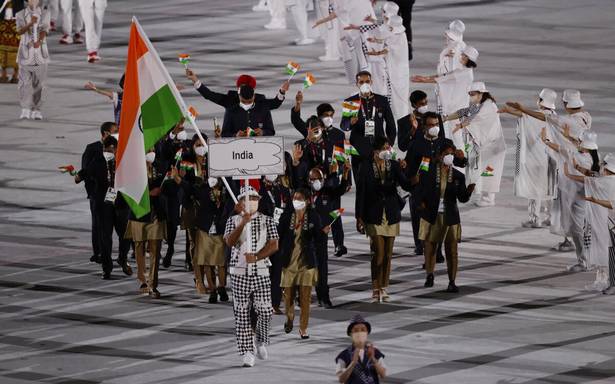 Segment features athlete training on a treadmill in the dark as a nod to the pandemic; Osaka lights the cauldron; Japan’s Emperor declares Games Open.

“It’s finally happening! We did not know until last week if this would be possible,” beams a volunteer as the five gigantic wooden Olympic rings make their way into a near-empty Olympic Stadium on Friday.

The volunteer is ecstatic to see the Games, postponed by a year due to the coronavirus pandemic, get underway, while hundreds of locals gather outside the stadium to protest the holding of the Games.

Such is the contrast, such are the two parallels in Japan — where some see the Games as an opportunity to show the world that Japan can host the Games even in such testing conditions, while others protest the very decision. In fact, such is their antipathy to the Games that a 53-year-old woman named Kayoko Takahashi tried to douse the Olympic torch last week.

She reportedly screamed “No Olympics. Stop the Games,” and tried to squirt water with a watergun during the torch relay before being arrested.

Back at the Olympic Stadium, the opening ceremony was a rather subdued and muted affair as the stands sat empty.

The 205 contingents walked out gleefully, waved their flags with gusto, to be greeted by the officials, journalists and volunteers.

Keeping up with the times we live in, the ceremony featured a segment with a performer running on a treadmill and surrounded by darkness — depicting how athletes had to train in isolation during the pandemic.

The opening ceremony also had a strong Manga (Japanese comics and graphic novels) flavour as all the text on the placards was inspired by the speech bubbles featured in comics.

A 114-member Indian contingent had marched at the 2016 Olympics’ opening ceremony, which was held in front of a capacity crowd of 78,000 people at Rio’s Maracana stadium, while 81 Indians marched on at the 2012 Games. But such is the world we are now in — where masks and social distancing are the need of the hour and the razzmatazz of an opening ceremony at Tokyo’s $1.45 billion stadium is curtailed by the sight of thousands of empty seats. Japanese tennis star Naomi Osaka lit the Olympic cauldron. She lifted the torch to the gleaming cauldron, which had unfurled at the top of a ramp representing Mount Fuji.