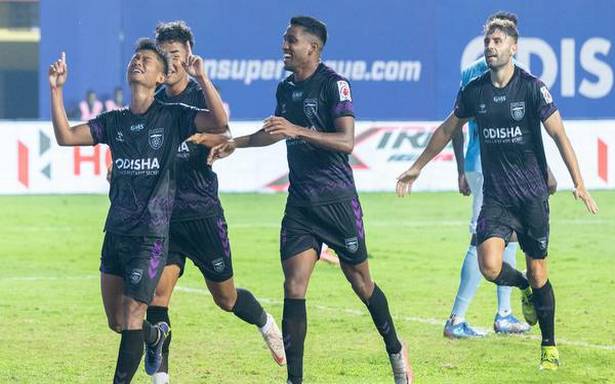 The ISL produced yet another high-scoring thriller on Monday night. This time around, Mumbai City was at the receiving end as Odisha FC stunned the defending champion and table-topper 4-2 at Vasco’s Tilak Maidan Stadium.

Odisha was 1-2 down with just 20 minutes remaining, but Jerry Mawihmingthanga produced two superb goals within the space of seven minutes to lead his side to what has been one of the upsets of the season.

Goals from Ahmed Jahouh and Igor Angulo had put Mumbai ahead after Aridai Cabrera had given Odisha the lead in the fourth minute. The victory was sealed by Jonathas de Jesus in the dying minutes.

Mumbai is still leading the table, though, with 16 points from nine games, one more than the second-placed Hyderabad FC.

Odisha remains seventh, but it has taken its tally to 13 points, from nine matches, not to mention the improvement it has made in its goal difference.

Odisha may have kept its reputation of leaking goals, but on this night it was able to score more than it conceded. And it should thank Jerry for that. He scored his first with a superb header, from close in, off a fine cross from Nandakumar Sekar. The second came off a pass inside the box from Jonathas.

Twelve minutes later, he returned the favour, as the Brazilian ensured there wasn’t enough time for Mumbai to come back.

If Odisha rattled Mumbai in the second half, it was a different story in the first. The reigning champion, after going 2-1 up, thanks to the brilliance of Jahouh, was all over Odisha.