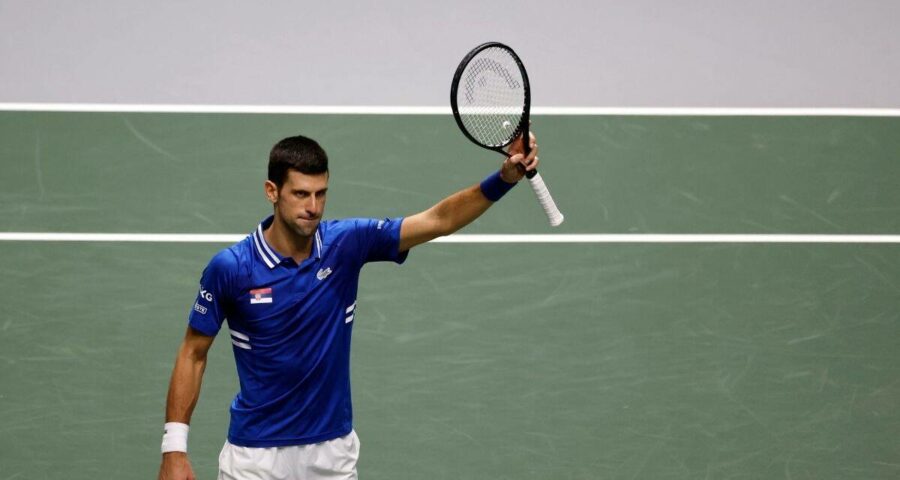 Organisers of the season's first Grand Slam at Melbourne Park have said all players have to be vaccinated to take part, which Djokovic called 'blackmail'. Novak Djokovic is still uncertain whether he will take part in the 2022 Australian Open but will soon make a decision, the world number one said after Serbia’s 2-1 defeat by Croatia in the Davis Cup semi-finals on Friday.

Djokovic, 34, has repeatedly declined to reveal whether he has been vaccinated against COVID-19, with his father Srdjan telling Serbia’s Prva television last week that the world’s top-ranked player would probably pull out of the tournament.

“I know what you want to ask but I am not going to give you an answer tonight,” Djokovic told a virtual news conference after a question about when he might be expected on court again.

“Obviously, Australia is just around the corner so you’ll know very soon.

“I will use the next days to recover and forget about tennis. I am really tired from this season and this whole year. I need some family time now and we’ll see what the future holds,” he added.

Organisers of the season’s first Grand Slam at Melbourne Park have said all players have to be vaccinated to take part, which Srdjan Djokovic called ‘blackmail’. The state of Victoria sports minister Martin Pakula dismissed the criticism.

Should Djokovic miss the January 17-30 event he has won a record nine times, he will pass up an opportunity to top the men’s all-time list of major winners as he is tied on 20 Grand Slams each with peers Rafa Nadal and Roger Federer.

Djokovic looked grim-faced after his valiant effort to propel 2010 champions Serbia into the Davis Cup final fell short against traditional rivals and twice former winners Croatia, who won the decisive doubles to claim a 2-1 overall victory.

Djokovic hauled Serbia into the tie with a straight-sets win over Marin Cilic after Croatia’s Borna Gojo overpowered Dusan Lajovic, but Djokovic and Filip Krajinovic could not stop world number ones Mate Pavic and Nikola Mektic in the crunch rubber.

“We always knew this was going to be the toughest match of the tie,” said Djokovic. “In order to win the Davis Cup (again), we need to have more doubles players, we need a doubles team.

“These guys are the best in the world. They always know exactly where the ball is going to land and if you don’t hit a perfect shot, you’re in trouble.”

Croatia will clash in Sunday’s showpiece with Germany or the Russian Tennis Federation, who meet in the other semi-final on Saturday.