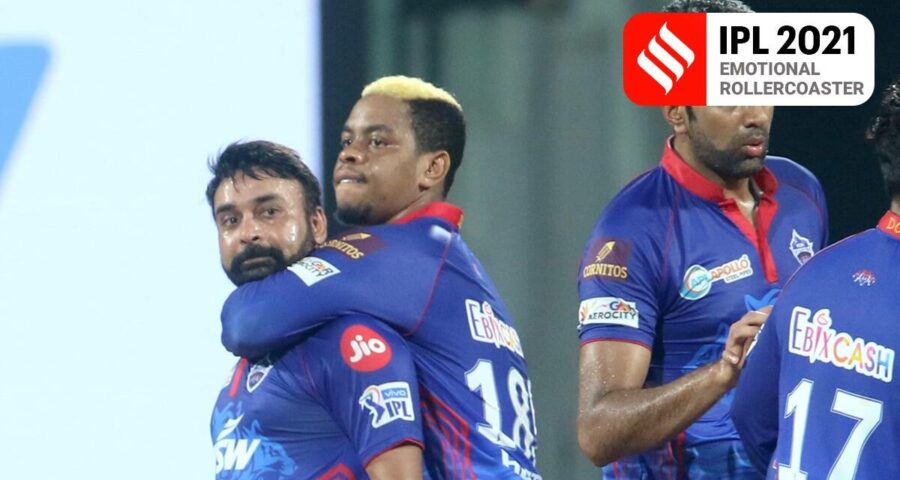 Delhi Capitals beat Mumbai Indians by six wickets with five balls to spare after losing four matches on trot against them last season.

Amit Mishra was the emotional barometer for Delhi. Back in the playing eleven, Mishra began with the usual blend of frustration and intensity on his face (now sporting a thick beard, the talk of the Dugout commentary). There were angry glares directed at those putting less than 100 per cent on the field, self-reproach at each boundary conceded — three in his first eight deliveries. Mishra truly let loose when he deceived Rohit Sharma into dragging the ball to long-on — seventh instance of the veteran spinner getting the Mumbai captain out, tied for most head-to-head battles won in IPL. The vigorous fist pumps and guttural yells returned two balls later when Hardik Pandya emulated his skipper. He grinned ear to ear after trapping Kieron Pollard LBW and was suitably subdued after a lucky bowled dismissal of Ishan Kishan. Each celebration of Mishra was followed by a quick camera pan to the Mumbai dugout, where the leggie’s bunny Rohit shook his head or sat stonefaced.

With that swagger and exuberance, it’s difficult to imagine Hardik Pandya being a bundle of nerves on a cricket field. That’s precisely what he was on Tuesday evening at the MA Chidambaram Stadium. Walking out to bat in the 9th over, with Mumbai Indians in strife at 76/3, the star all-rounder was entrusted with a specific task of anchoring the innings. Instead, Hardik pummelled the first delivery he faced — a slow, teasing Amit Mishra leg-break — to Steve Smith at long-on. It resulted in Hardik bagging the fourth duck against Delhi Capitals, the most by any player against this franchise. With 35 runs from four games this season, he has looked a bit edgy and not in his usual free-flowing self with the bat. Part of the travails stemmed from the fact that Hardik is just a one-dimensional cricketer these days. The back surgery has delayed his return to the bowling crease. When he is fit and contributing in every sphere of the game, it transforms him into an irresistible match-winner. However, when he has only two skills to provide, the pressure gets amplified a bit more.

Kagiso Rabada was the Purple Cap winner last season, which finished a little more than five months ago, and was one of the key factors in Delhi Capitals reaching as far as the finals. But the South African speedster has been strangely off colour so far. His trademark aggression and intensity are nowhere to be seen.

Maybe, the frequent sanctions and disciplinary actions have taken something out of his game as Rabada tries to stay within limits. When the game against Rajasthan Royals was in the balance, Rabada delivered a lacklustre 19th over to jeopardise his team’s chances of defending a moderate total.

On Tuesday, he was not handed the new ball with DC skipper Rishabh Pant bringing him on in the fifth over. But that didn’t improve Rabada’s fortunes. First Suryakumar Yadav guided him fine of third man for a boundary and then Rohit Sharma pumped him for a straight six.

He came back later in the innings and fared a little better, but that’s only because Mumbai Indians had lost a lot of wickets. That DC’s pace spearhead only bowled three overs also tells a tale.