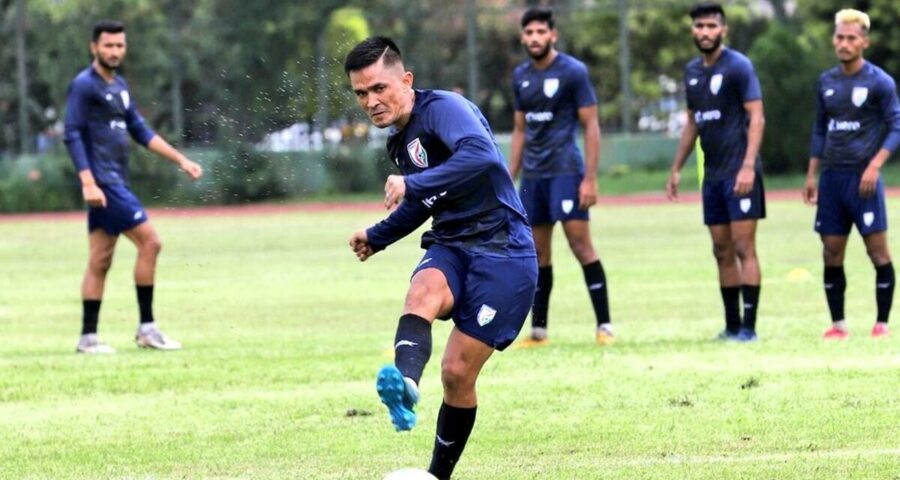 India will take on Nepal for two friendlies on September 2 and September 5 in Kathmandu in their first meeting in six years. The new season will kick off with neighbours and footballing rivals Nepal and India meeting at Dasharath Stadium, Kathmandu for two back-to-back international friendlies on Thursday and Sunday.

Rain followed the Sunil Chhetri-led Indian team when they reached Kathmandu on Monday from New Delhi after a two-week preparatory camp in Kolkata.

The two sides will be facing each other after a gap of six years. The last time they met was in 2015 in Kathmandu in the 2018 FIFA World Cup qualifier play-offs. Only Sunil Chhetri, Pritam Kotal and Gurpreet Singh Sandhu are still in the current squad.

India and Nepal have met at least 19 times with the visitors winning 13 times and hosts winning twice while the rest were draws.

“Firstly, it (camp) helped us to get back into shape and we gained a lot of technical insights,” said Pronay Halder, the defensive midfielder. “The training sessions were gaining more info and the gym sessions surely helped us gain more strength.”

Striker Rahim Ali and defender Seriton Fernandes are the new faces in the 25-member team. As always, Chhetri w/ill lead the attack with Manvir Singh and Farukh Choudhary while Gurpreet Singh Sandhu is expected to start in goal.

For the first time, Indians will miss defender Sandesh Jhingan who moved to Croatian top-tier side Prva HNL two weeks ago but suffered an injury and is yet to resume training. Others who have been axed from the team include Ashique Kuruniyan, Udanta Singh and Rowllin Borges.

“The two international friendlies will help us prepare for the forthcoming SAFF Championship in the Maldives next month…,” national head coach Igor Stimac told the-aiff.com. “We have analysed Nepal as an opponent and the kind of progress they made in the FIFA World Cup qualifiers. They have put on display that they can play quality football and can defend as a team. My colleague has done a good job and there are a lot of young players in the squad.”

It has been raining for the past week in the Himalayan country. “I hope that we don’t suffer heavy rains during the matches so that we can play some exciting football,” Stimac added.

About the players from ATK Mohun Bagan and Bengaluru FC who missed the camp, the coach said, “They have been playing AFC Cup matches for their clubs and are in good physical condition”.

Chhetri while thanking hosts All Nepal Football Association and the Government of Nepal for the invitation said, “… the opportunity to play international football is soothing for us. Nepal are a tough opponent but we want to start the season with a win,” said Sunil whose mother is from Nepal.

Abdullah Almutairi, national coach of Nepal, said he has been working on “changing the mentality of his players.”

“I want to make the players proud rather than being happy. We have been training for the last two months and there are a lot of youngsters in the squad. Our target is to win the SAFF Championship in the Maldives, and eventually qualify for the AFC Asian Cup China 2023 and we don’t care about FIFA Rankings,” said the Kuwaiti who also coached Kyrgyzstan U-16 team apart from clubs in Kuwait and Saudi Arabia.

The kick-off on Thursday (September 2) is from 5.15 pm (IST) and the match will be telecast live on the Indian Football team’s official Facebook page.