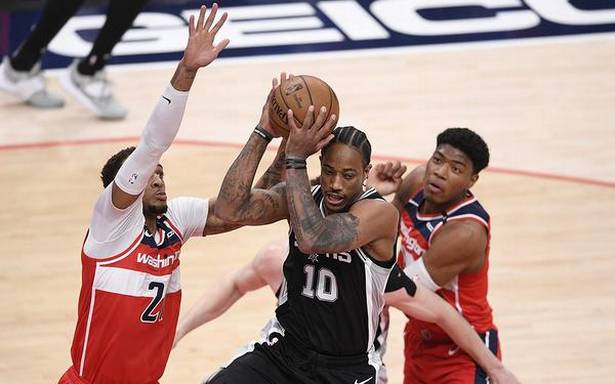 Russell leads Minnesota to a win over Utah

DeMar DeRozan scored 37 points and Dejounte Murray added 25 points and a career-high 17 rebounds as the San Antonio Spurs outlasted the host Washington Wizards 146-143 in overtime in a wild game on Monday.

The loss snapped Washington’s eight-game winning streak, its longest since December 2001. The game went back and forth over the last five minutes of regulation and went to overtime on a layup by Washington’s Bradley Beal with 15.8 seconds left that tied things at 133. DeRozan 18-foot turnaround fadeaway shot at the buzzer went in and out.

D’Angelo Russell scored a game-winning layup in the final seconds and finished with 27 points off the bench to lead Minnesota to its second win in three games against Utah.