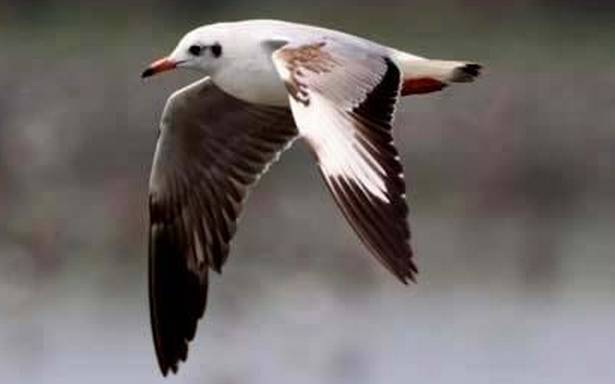 The water body is filled to the brim after decades

This is the first time that the birds, which are found mainly in South America and in Africa south of the Sahara, were spotted at the water body.

The grey-headed gulls have red bills and legs and the underwings are dark grey in colour with black wing tips. They lay two to three eggs each in nests prepared in bushes on floating grass in the waters.

Speaking to The Hindu, Divisional Forest Officer (DFO-Wildlife Management) C. Selvam said the Forest Department staff sighted the grey-headed gulls in the lake bed villages, which was rare. The birds migrate depending on the feed available in the wetlands, he said.

“Grey-headed gulls are found mostly in wetlands in marshes, lakes and water bodies. We have records that these gulls roost and brood in Coringa sanctuary. This is the first time we sighted the migrant birds in Kolleru area,” the DFO said.

“The South America and Africa breed birds prey on small fish, insects and snails. These birds migrate to other water bodies during the winter, and make noises like that of a crow,” Mr. Selvam said.

“We noticed six to eight grey-headed gulls with other migratory birds in the lake. These gulls were sighted in Kikkisa grass and bushy areas at Pandillapalli Gudem, Gummalapadu, Atapaka, Pedda Kottada, Alapadu, Penchikalamarru and other lake bed villages,” said an official who conducted a survey on migrant birds to the largest freshwater lake.

The DFO said Kolleru was filled to the brim after many decades, and this year, many migratory birds arrived at the lake to roost while some lakhs of birds have flown off from the lush-green villages with their young ones.

“Over five lakh birds were sighted at the lake, particularly at Atapaka Bird Sanctuary, also known as Pelicans’ Paradise. Along with pelicans, painted storks, common teals, stilts, large whistling teals, black tailed godwits, northern pintails and many other were birds were counted in our survey conducted at the lake in Krishna and West Godavari border bed villages,” Mr. Selvam said.