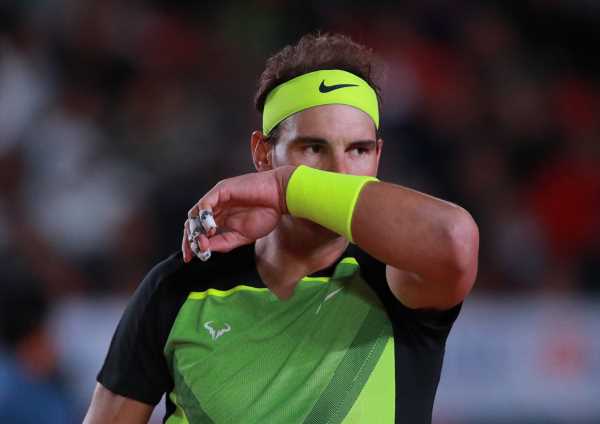 ‘Of course with victories the process is faster, but I need to keep fighting. That’s it’

Rafael Nadal said losing two straight matches was hardly the ideal preparation for his Australian Open title defence, but the world number two believes he had no reason to feel alarmed ahead of the season’s first Grand Slam starting in two weeks.

Nadal showed glimpses of brilliance during his opening loss by Briton Cameron Norrie following his return to action after an injury-hit 2022 season and he looked set to respond against De Minaur, only to fall again.

The 22-time Grand Slam champion has now won only one of his last seven matches on the ATP tour — a dead rubber round-robin stage victory over Casper Ruud at the ATP Finals.

His other losses have come against Felix Auger-Aliassime, Taylor Fritz, Tommy Paul and Frances Tiafoe. Nadal will next be in action at the season’s first Grand Slam at Melbourne Park starting Jan. 16, giving him time to iron out flaws.

Spain and Australia not being in contention for the next stage of the inaugural $15 million prize money event had dulled the edge of their meeting slightly and De Minaur’s quest for a first win over Nadal looked set to continue as he fell behind.

However, the 23-year-old rallied from a set and a break down to secure the biggest victory of his career as Nadal surrendered his serve in the 11th game and De Minaur closed out the victory to spark emotional scenes and delight the raucous Sydney fans.

Nadal, who needed pain-numbing injections on his foot en route to the French Open title and pulled out of his Wimbledon semi-final with an abdominal injury last year, said there were still positives despite his shaky start to the new season.

“Six hours on court almost. I need hours on court. I need battles like this,” Nadal told reporters. “I didn’t play much official matches the last six months, almost seven. Days like these two help.”

“Of course with victories the process is faster, but I need to keep fighting. That’s it. For moments, I played a good level of tennis. Playing good with the backhand. Changing directions with the forehand.”

Nadal said he felt fine physically but needed to improve his speed and be more dynamic on the court to improve his confidence ahead of the Melbourne Park major.

“I have two weeks before the Australian Open starts. I can’t say the situation is ideal but at the same time I can’t say it’s negative, because for moments I was playing good,” Nadal said.

“I think that two matches is going to help me. I need to win a couple of matches. But the level wasn’t that bad. Putting in perspective that I arrived needing a little bit more time.”

“… I’m not too alarmed, too negative about what happened. I think it was a real chance to lose these kind of matches. Last year I lost two matches in Abu Dhabi, and that’s it.”