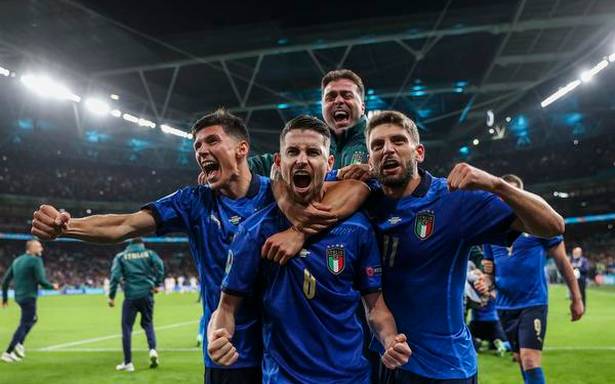 Will accept any decision by Cong. chief: Amarinder

Punjab Chief Minister Capt. (retd) Amarinder Singh on Tuesday said he would accept any decision taken by Congress president Sonia Gandhi with regard to changes in the party in Punjab and the State government. He was speaking after meeting Ms. Gandhi in a effort to end the factionalism in the State unit.

Italy reached the Euro 2020 final after keeping their nerve from the penalty spot to edge Spain 4-2 in a shootout following a compelling 1-1 draw after extra time on Tuesday.

Kitty Kumaramangalam, wife of late former Union Minister Rangarajan Kumaramangalam, was murdered in a robbery attempt at her residence in South West Delhi’s Vasant Vihar on Tuesday, July 6, 2021 night. The accused has been arrested, police said.

Postponed JEE-Main sessions to be held from July 20

The third and fourth sessions of the all-India engineering entrance examination JEE-Main will be held from July 20 to 25 and from July 27 to August 2 respectively, the National Testing Agency announced on Tuesday.

The death of 84-year-old tribal activist Father Stan Swamy in a Mumbai hospital on Monday due to ailments exacerbated by his incarceration without bail in the Bhima Koregaon case, has turned the spotlight on the other accused in case who remain in jail with medical conditions.

Amid a much anticipated Cabinet reshuffle at the Centre, Rashtrapati Bhawan has announced a slew of gubernatorial appointments, including that of Social Justice and Empowerment Minister Thawarchand Gehlot as Governor of Karnataka, replacing Vajubhai Vala. This was the surest sign that a Cabinet reshuffle, regularly postponed since the COVID-19 outbreak in 2020, will finally come to pass as early as Wednesday evening or Thursday morning.

All 10 Bhima Koregaon accused lodged at the Taloja Central Jail will go on a day-long hunger strike on July 7 to protest against the “institutional murder” of Father Stan Swamy. The 84-year-old tribal activist, who was repeatedly denied bail despite his deteriorating health, died at a Mumbai hospital on Monday.

India is watching the situation in the Afghan cities of Kandahar and Mazar-e-Sharif closely, with concerns for its missions and diplomatic staff there growing as the Taliban gains control over a number of provincial cities, said officials. However, the government denied it had shut down operations at its consulates there, calling reports that said India was pulling out its diplomatic personnel “incorrect”.

Aryna Sabalenka ended Ons Jabeur’s historic run at Wimbledon on Tuesday, the second-seeded Belarus player’s power getting the better of the guile of the Tunisian. Sabalenka won 6-4, 6-3 in 74 minutes.

A Mathura court on Tuesday rejected the bail plea of Kerala journalist Siddique Kappan, who has been in jail for nine months for various offences under the stringent Unlawful Activities (Prevention) Act or UAPA.