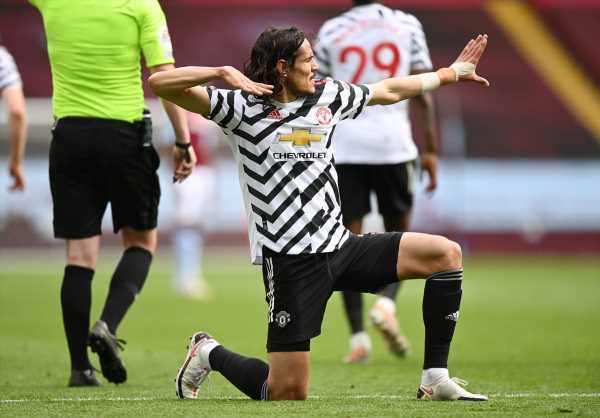 Man United fight back in 3-1 win at Aston Villa 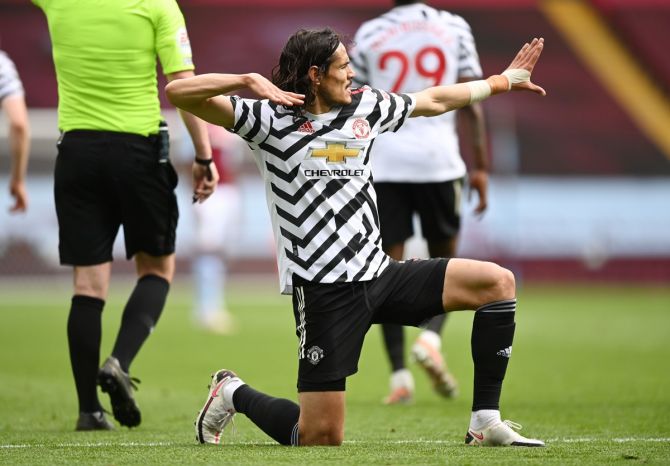 Manchester United fought back to beat Aston Villa 3-1 away in the Premier League on Sunday as Bruno Fernandes, Mason Greenwood and Edinson Cavani scored in the second half to put on hold the title celebrations of champions-elect Manchester City.

The result left United second on 70 points from 34 games, 10 behind City who have played a game more and missed a chance to secure the title on Saturday after they suffered a 2-1 home defeat by Chelsea.

Bertrand Traore fired Villa ahead in the 24th minute with a brilliant strike into the top corner from 15 metres after some sloppy defending by the visitors, who gave the ball away several times deep in their own half.

Fernandes equalised with a 52nd-minute penalty, sending Villa goalkeeper Emiliano Martinez the wrong way with a coolly taken spot-kick after a series of clumsy challenges by Douglas Luiz sent Paul Pogba tumbling over.

Greenwood turned the match on its head four minutes later with a neat shot on the turn from inside the penalty area after he shook off Villa centre back Tyrone Mings.

Substitute Edinson Cavani sealed United’s victory with a glancing 87th-minute header before Villa striker Ollie Watkins was sent off, having received a second yellow card after he was adjudged to have dived in United’s area. 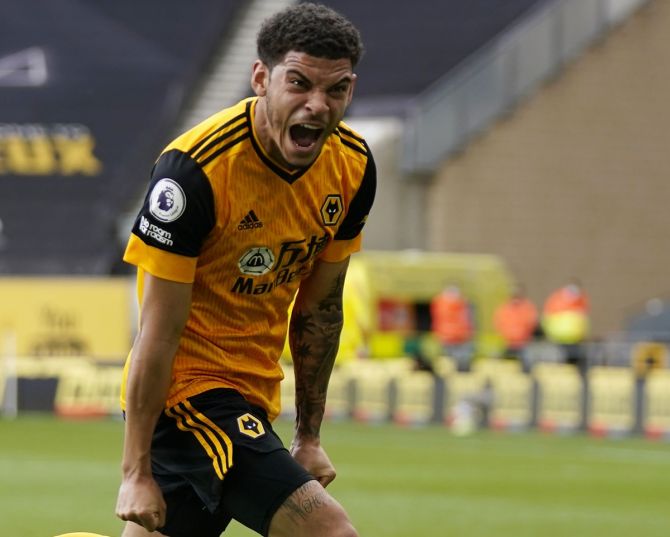 Lewis Dunk fired the visitors ahead in the 13th minute, but the Brighton captain was dismissed early in the second half for a last-man challenge on Fabio Silva, turning the game on its head.

The hosts took full advantage of the extra man and drew level in the 76th when substitute Adama Traore fired home from close range after a neat one-two with Silva.

Gibbs-White, who had spurned a gilt-edged opportunity just minutes earlier, sealed the victory in the 90th when he smashed an effort from the edge of the penalty area perfectly into the top corner for his first Premier League goal.

“I am speechless. I have been dreaming of this day since being a little kid,” Gibbs-White told the BBC. “To score and win the three points is so special.”

“I should have scored the first one. It was an open goal, I was devastated. But I took my time on the second one and went for it.”

Wolves, chasing their first top-flight victory against Brighton in 12 attempts, made the brighter start, but Vitinha’s shot from the edge of the box was well saved by Robert Sanchez.

Brighton grew into the game and took the lead through Dunk, who powered Pascal Gross’s corner past Rui Patricio.

Graham Potter’s side continued to press forward and twice went close to doubling their lead, with Patricio denying Dunk a second from close range before Neal Maupay fired his effort over the bar.

Having failed to drive home their advantage, Brighton found themselves on the back foot after Dunk’s dismissal in the 53rd and two goals in the space of 15 minutes sealed their fate.

Wolves boss Nuno Espirito Santo was delighted with his side’s response after a disappointing first half.

“I thought the reaction was very good,” he told BBC. “The red card made a big difference. We deserved the win.”

Brighton’s misery was compounded by a red card to Maupay after the final whistle for foul and abusive language.

The result means Brighton remain in 15th on 37 points after 35 games, 10 points clear of 18th-placed Fulham, who have a game in hand. Wolves remain 12th on 45 points.