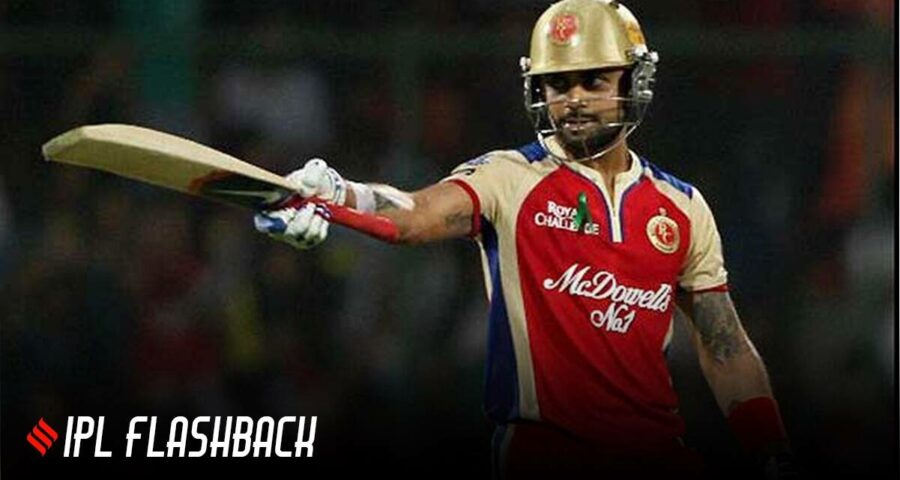 Just two days after the Delhi police had arrested Sreesanth and IPL was rocked by the spot-fixing scandal in May 2013, Virat Kohli produced a gem to refocus the eyeballs on cricket with a 29-ball 56. 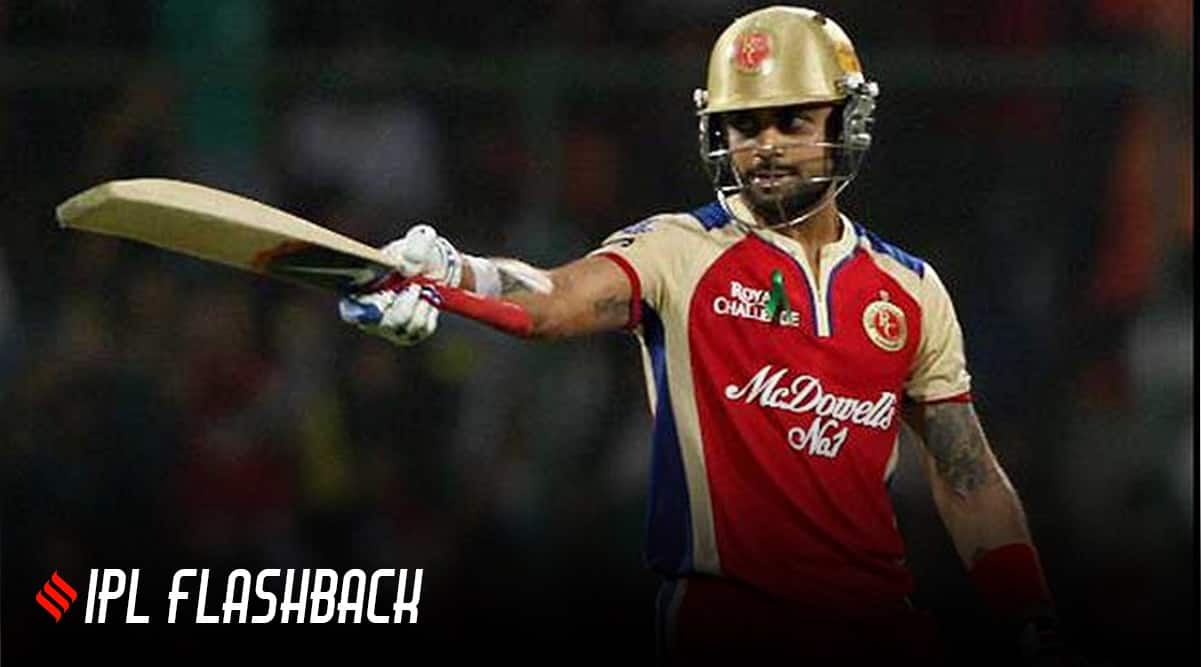 Just two days after the Delhi police had arrested Sreesanth and IPL was rocked by the spot-fixing scandal in May 2013, Virat Kohli produced a gem to refocus the eyeballs on cricket with a 29-ball 56. He promoted himself as a opener in a rain-curtailed 8-over game against CSK that RCB needed to win to stay in contention, and he went after R Ashwin and Dwayne Bravo in some style. He repeatedly charged down at Ashwin to hit boundaries that included smashing six over long-off off a carrom ball and walloped Bravo in the end. He had been wanting to open for a while in that season but coach Ray Jennings wasn’t convinced until that game. It remains one of his best knocks in IPL.

The Indian Express report from IPL 2013 RCB vs CSK game —

The Royal Challengers Bangalore kept their play-off hopes alive, at least for one more day,as the home side beat the Chennai Super Kings by 24 runs, an impressive margin considering the match was reduced to eight overs a side due to a wet outfield. The match did not start until three hours after it was supposed to, but the home fans were given plenty to cheer about as Virat Kohli smashed an unbeaten 56 of just 29 balls to help Bangalore post 106/4. Zaheer Khan struck four times in the chase to put paid to Chennai’s hopes.

If Bangalore had lost the game,they would automatically have handed the fourth spot to the Sunrisers Hyderabad. Even with the win, Bangalore will not make the last four if Hyderabad win their game on Sunday. For much of Saturday evening however, it looked as if Bangalore would be knocked out of the tournament without a ball of their final game being bowled. Incessant rains kept the ground staff busy all evening and it was not until 11 pm that play was possible.

The game was reduced to eight overs per side and MS Dhoni, walking up to the toss, said “the whole game would be death bowling”. It looked that way, at least when Bangalore were batting.

In matches of this kind,it is the side bowling first that has a big advantage,as they would start their batting innings knowing exactly what to get. But Bangalore, with more pure hitters in their line-up than Chennai, were more than up to the task. If the Bangalore batsmen may have been unsure of what a good total would be in a curtailed match,the Chennai bowlers were not too clear what the ideal length or pace would be on the track. It was not until Dwayne Bravo and Mohit Sharma came on in the second half of the eight over innings that the slower balls came out. Until then, Chris Gayle and Virat Kohli had tucked into the predictable line and lengths that Chris Morris and Jason Holder (20 off one over) were dishing out. MS Dhoni’s decision to give Ravichandran Ashwin, who had gone for just six in his first over, one more over proved costly, with Kohli taking him for 16. Gayle perished for a 13-ball 28, but AB de Villiers first and Moises Henriques later, kept the foot on the pedal. Kohli batted through the mini-innings, finishing unbeaten on 56 off 29 balls as Bangalore made 106 for two.

Starting the innings needing more than two runs a ball (the required run rate for Chennai was 13.38 when the chase began) was a daunting task which only got even more impossible when Zaheer Khan dismissed Michael Hussey and Suresh Raina off successive deliveries in his first over, the second of the innings. Wickets would not be a matter of concern in so short a game, but the Chennai side never really got going,finding the boundaries too infrequently to be in contention at any stage of the chase.

With just 48 balls per innings, the number of boundaries hit would pretty much determine the outcome of the game, and so it proved on Saturday. Bangalore smashed 88 runs in fours and sixes and they came at more than one every three deliveries. Chennai, on the other hand, could only manage eleven such hits for 54 runs.

While the win was critical for Bangalore, the loss did not affect Chennai’s tournament fortunes by much. The loss notwithstanding, the visitors will go into the first qualifier along with Mumbai Indians, as both sides get two shots at making the final.