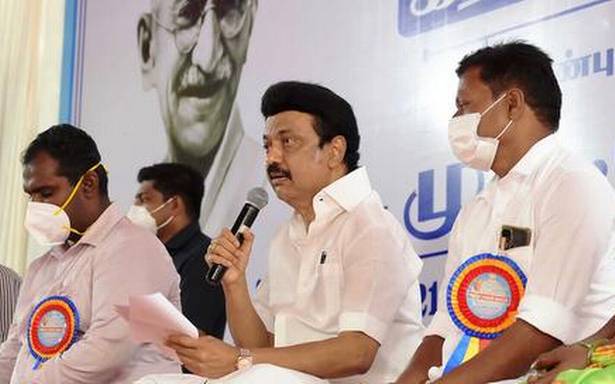 ‘Equality and unity are vital for development’

In a first, Chief Minister M.K. Stalin on Saturday took part in the grama sabha held at the Pappapatti reserved village panchayat near Usilampatti on the occasion of Gandhi Jayanti.

Hundreds of people from the villages of Pappapatti, Mahadevanpatti, Paeyanpatti and Karayanpatti took part in the meeting held under a huge pandal outside the Ochandamman temple.

As per the tradition, all the villagers were seated on a mat on the ground, even as the Chief Minister sat on a platform, along with panchayat president S. Muruganantham, vice-president Lakshmi, Secretary to the Chief Minister and former Madurai Collector T. Udhayachandran and the incumbent, S. Aneesh Sekhar. After panchayat secretary Thangapandi read out the agenda, the Chief Minister joined the elected representatives, officials and panchayat residents in taking a pledge to promote gender equality, work against female foeticide and infanticide and not to protect sexual predators.

Later, Mr. Stalin interacted with the locals. A senior resident of the panchayat likened the Chief Minister’s visit to that of Lord Kallazhagar who liberated Mandugamuni from a curse. “The visit of the Chief Minister augurs well for our panchayat,” he said.

Mr. Stalin enquired with a woman resident, Priya Asaithambi, whether the ₹4,000 assistance given by DMK government reached every household. She was all praise for the free bus service for women, but also pointed out that no free service was available from Pappapatti to Madurai. The Chief Minister ordered that this demand be fulfilled immediately, much to the cheer of the residents.

Recalling the Father of the Nation’s dream of ‘grama rajyam’, Mr. Stalin said the real India was in the villages. Madurai soil had the pride of bringing about a dress revolution in the life of the Mahatma. The Chief Minister recalled how the elections were held to the four reserved panchayats of Pappapatti, Keeripatti and Nattarmangalam (Madurai district) and Kottakatchiyendal (Virudhunagar) after 10 years in 2006 when he was the Minister for Local Administration. “The elections were held to strengthen democracy. The then government gave ₹80 lakh to the panchayat and the DMK gave ₹20 lakh from its own funds,” he said.

The Chief Minister said equality was the basis for development and no development was possible in a society without unity. “As the Mahatma said a good democracy should listen to the voice of the last person, I have come here to do the same,” he said.

Minister for Cooperation I. Periyasamy was present.