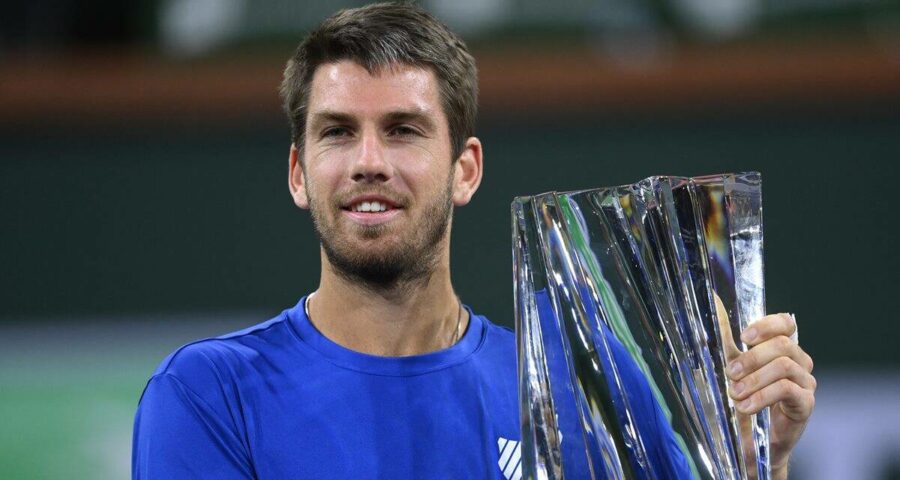 Cameron Norrie beat Nikoloz Basilashvili 3-6, 6-4, 6-1 to win the BNP Paribas Open, giving the tournament its first champion ranked outside of the Top 25 since 2010. A handful of tennis’ superstars skipped the coronavirus-delayed BNP Paribas Open. A rash of upsets sent other big names packing, too. Left standing at the end as champions were two players ranked outside the Top 25.

Britain’s Cameron Norrie beat Nikoloz Basilashvili 3-6, 6-4, 6-1 on Sunday, giving the tournament its first men’s winner ranked outside of the Top 25 since 2010.

Novak Djokovic, Rafael Nadal, Roger Federer, Naomi Osaka and Serena Williams were among those skipping the tournament that was delayed 2 1/2 years because of the coronavirus. The two-week event was hit with a rash of upsets, including top seeds Daniil Medvedev and Karolina Pliskova.

That cleared the way for the up-and-coming Norrie and Badosa to claim the biggest titles of their young careers. They earned $1.2 million each.

“Obviously, it was pretty miraculous that all the top guys lost,” Norrie said. “When I looked at the four semifinalists, hmm, it’s a good opportunity here.”

Norrie, ranked 26th, had the only two breaks of the final set and won when Basilashvili’s backhand sailed long on match point. Basilashvili, ranked 36th, was the first player from the former Soviet republic of Georgia to reach an ATP Masters 1000 final.

Badosa joined Bianca Andreescu in 2019 and Serena Williams in 1999 in winning the title in her first appearance. It was Badosa’s second title of her career, having won in Belgrade earlier this year.

Norrie handled the big-hitting Basilashvili’s power off the baseline by working the angles. He broke the Georgian at love on Basilashvili’s forehand error to take the second set.

“He’s difficult, not really giving you any rhythm,” Norrie said. “I was able to to get my foot in the door, able to hang around, cause some trouble in the third set.”

Norrie was up a break at 2-0 in the second when he fought off a rare break point on his serve for a 3-0 lead. Basilashvili won his only game with a crosscourt forehand winner off Norrie’s drop shot to trail 3-1. Norrie won the final three games to take the match in just under two hours.

Basilashivili said he had “health problems” in the third set.

“I was very tight. I will not say what it is, but I did not feel good,” he said. “I did not have anything left.”

Badosa and Azarenka struggled for over three hours, trading back-to-back service breaks five times. The last time Azarenka broke for a 5-4 lead in the third, and Badosa broke right back for a 5-all tie.

“We were both going for our shots, really pushing each other to the max,” Azarenka said.

Badosa missed a backhand that allowed Azarenka to hold at 6-all.

Badosa dominated the tiebreaker, racing to a 6-2 lead. Azarenka dumped a forehand into the net to give Badosa match point.

Badosa cracked a forehand winner, then collapsed at the baseline. She lie face down, crying and shaking, before getting up. Azarenka came around the net and hugged the 23-year-old Spaniard.

Azarenka, the two-time major champion and former top-ranked player, was seeking just her second title since 2016. She last won in 2020 at Cincinnati. The 32-year-old from Belarus came up short in her bid to become the first woman to win Indian Wells three times, having taken the title in 2012 and 2016.

Azarenka’s season was interrupted by injuries and she made early exits in the Grand Slam events. Her best result was making the fourth round at the French Open.

“This year has been challenging a bit,” she said, “but finishing on a strong note, not necessarily with the result I wanted but with the progress I wanted to seek, that’s really positive.”

In the first-set tiebreaker, Badosa had leads of 4-0 and 5-3. Azarenka tied it 5-all on Badosa’s netted forehand. Azarenka missed a backhand to give Badosa a set point and the Spaniard cashed in with a backhand winner to take the set.

Badosa She beat fifth-seeded Barbora Krejcikova in the fourth round, No. 15 Angelique Kerber in the quarterfinals and No. 14 Ons Jabeur in the semifinals _ all in straight sets _ to reach the final.

“The first thing I learned this week is that nothing is impossible,” Badosa said.

Badosa came into the tournament ranked 27th in the world; a year ago, she was 87th. Badosa is projected to rise to a career-best 13th in Monday’s WTA Tour rankings.

The combined ATP and WTA tour event was one of the first major sporting events canceled in March 2020 when the coronavirus took hold in the U.S. It will return to its usual March slot next year.