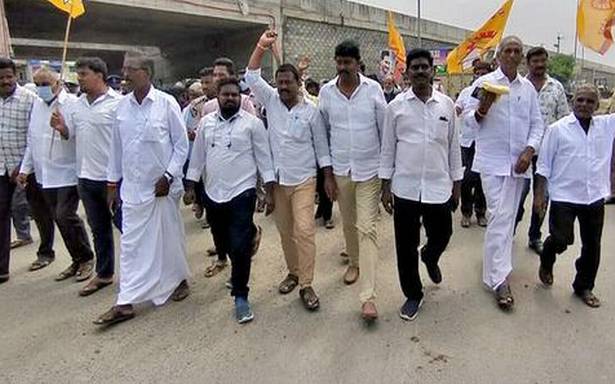 While most educational institutions remained closed, buses, both public and private ones, ran as usual. Shops and other commercial establishments downed the shutters for some time when the activists went around to enforce the bandh and resumed business after they left.

Addressing the media in Nellore, Mr. Chandramohan Reddy said the ruling YSRCP would have to face consequences for perpetrating attacks on TDP offices. “We will intensify our stir to expose the YSRCP’s autocratic style of functioning,” he added.

A high drama was witnessed when Nellore TDP In-charge Kottamreddy Srinivasulu Reddy defied the police curbs and came out of his house and staged a protest. Police resorted to mild lathicharge to restore order as tension gripped the area.

TDP activists were seen engaged in a heated argument with the police at various places and insisted that they be allowed to exercise their ‘democratic right’ to protest.

Tension prevailed at the MS function hall centre in Ongole when the opposition party activists broke the glass panes of a hypermarket.

Police rushed to the spot and restored order. Later, a criminal case was registered by Prakasam police who kept under house arrest 60 TDP leaders and took into custody 300 TDP activists across the district to ensure that the bandh was incident-free, Prakasam Special Branch Deputy Superintendent of Police Mariya Das said.