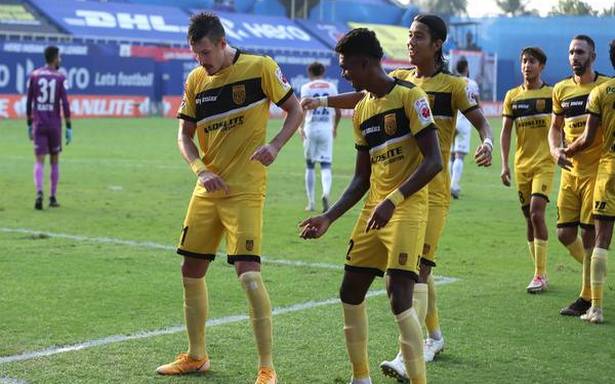 Sandaza and Chianese find the target for HFC

Chennaiyin FC’s woes showed no signs of ending as the side suffered a 2-0 defeat to Hyderabad FC in an Indian Super League match at the Tilak Maidan Stadium, Vasco, on Sunday.

A much-improved second half from Chennaiyin notwithstanding, Hyderabad scored once in either half, through Fran Sandaza and Joel Chianese, to climb to third position with 22 points from 15 matches. Chennaiyin remains sixth with 16 points.

Spaniard Sandaza put Hyderabad ahead with a fine strike in the 28th minute. A one-two between Joao Victor and Sandaza saw the latter go past the central defender Deepak Tangri and unleash a deft left-footer past ‘keeper Vishal Kaith. But for the goal, both teams played largely uninspiring football and it was more or less even.

Minutes after the restart, defender Eli Sabia strode forward, exchanged a pass with Esma Goncalves, and struck fiercely from distance, but it crashed off the crossbar after beating ‘keeper Laxmikant Kattimani.

Chennaiyin had a golden chance to equalise, in the 78th minute, when Lallianzuala Chhangte’s exquisite cross from the right found forward Rahim Ali.

All that Ali had to do was to direct the ball goalward, but he sliced it wide.

Hyderabad soon doubled the lead, with Victor’s second assist of the match enabling Chianese to come up with a clinical finish into the corner of the net. The goal ensured a comeback was beyond Chennaiyin.