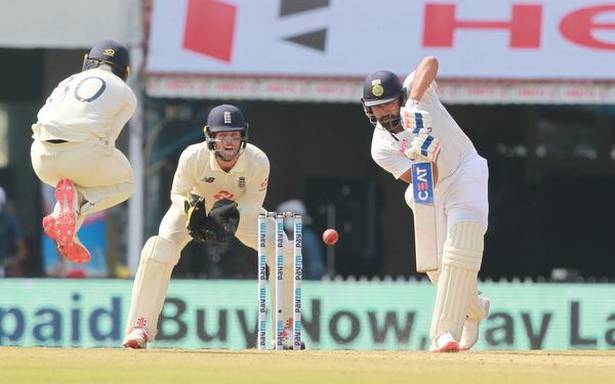 The home team lost a glorious opportunity to make a break from the past and display confidence.

Game changers come rare. They go into hibernation for a period of time. Then they roar back, innovating, creating and conjuring magic.

These men alter the course of matches, decisively. Rohit Sharma’s stunning 161 on a dusty pitch that offered turn from the first day of the second Test at Chepauk was one such innings.

Take away that knock of sheer brilliance from the Indian innings and we might have had a far closer game.

His audacious front-footed strokeplay on the devious surface at the M.A. Chidambaram Stadium was breathtaking. He trusts his instincts and they proved right.

Rohit’s innings of dominance notwithstanding — India was 106 for three at lunch and the Mumbaikar was on a scintillating 80 — the vexing question remains.

Is India really that desperate for a Test victory — even if a spot in the World Test championship final is at stake — that it needs to prepare this sort of pitch.

Truth to tell, it doesn’t reflect much on India’s confidence as a world-beating side.

A team that returns home after defeating Australia at the lively Gabba in the series decider without several of its principal cricketers should have displayed greater belief in its own strengths than take the easiest possible route to victory.

These are critical points in a nation’s cricketing journey. And a lot hinges on the direction the side takes, leaving the past behind, charting its own course.

Indeed, India lost a glorious opportunity to make a break from the past and prepare a sporting track where everyone had an equal chance.

Clearly, India should not have panicked after finding itself 1-0 down after the first Test. And once India posted a 300-plus score in the first innings of the second — fired by the mercurial Rohit — there was going to be only one result.

Ashwin was always expected to pick wickets on this surface. The top soil was loose, there were puffs of dust, and the ball turned and bounced, often viciously.

In fact, it was surprising Ashwin did not return a 10-wicket match haul on such a track. It was there for the taking.

Of course, Ashwin batted with exceptional timing, if not footwork, to notch up his fifth Test hundred. It was evident in the manner he swept that his mind was uncluttered.

The lanky Axar Patel has a future, particularly on a pitch that offers turn and bounce. He has a high-arm action, bowls a consistent line, turns the ball away and possesses an arm-ball.

A word about Rishabh Pant. He batted with typical gusto in the first innings and kept wickets admirably on a difficult track. The powerhouse from Delhi will only improve with time.