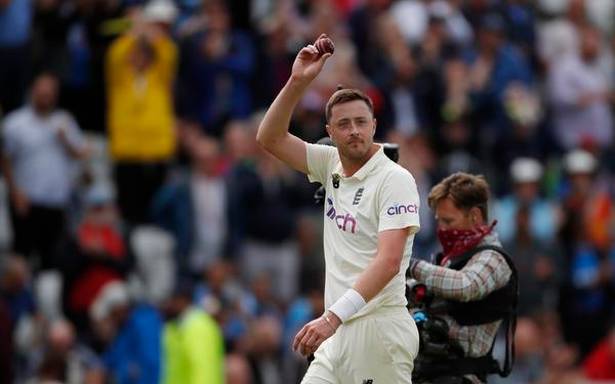 The 27-year-old’s spectacular Test debut against New Zealand in June was mired in controversy after his racist and sexist tweets dating almost a decade back were discovered, earning him an eight-match ban, three of which had already been served.

Seamer Ollie Robinson, who grabbed his maiden five-wicket haul in his comeback Test against India after being suspended for offensive old racist tweets, termed the phase "toughest in his life as he had doubts" about his England future.

The 27-year-old’s spectacular Test debut against New Zealand in June was mired in controversy after his racist and sexist tweets dating almost a decade back were discovered, earning him an eight-match ban, three of which had already been served.

After his apology, the Sussex seamer earned a recall at Trent Bridge and he confessed that he feared his England career was all but over.

"There was a time when I was speaking with my lawyers and we were looking at the fact I could be banned for a couple of years and never play for England again," Robinson said at the end of the day’s play.

"In a couple of years, I would have been 30 and someone else could have come in and taken my spot. So there was definitely a time when I had doubts over my career, but luckily, it all came good today." Robinson’s career-best 5/85 meant that India’s first innings lead remained under 100 as the hosts kept their hopes alive.

Terming the phase as the toughest of his life, he said: "Probably the toughest few weeks I’ve had in cricket, to be honest, or in my life actually. It affected not only myself but my family too. I’ve learned a lot now and I’m looking to move forward." He said he’s a "different man" now from the person who wrote those as a "young, naive guy".

"I was a young 18-year-old naive guy and I made a lot of mistakes, not just those tweets," he said.

"I have grown as a person a lot in that time. I have learned a lot and tried to develop myself as a person in the last 10 years." "I am a father now as well and I have just tried to make myself the best person I can be and I hope people will be able to see that," said the bowler who idolises Austraian great Glenn McGrath.

He further gave credit to his team for backing him fully during the difficult times.

"Everyone in England was very good. They did put their arm around me and helped me through a tough situation," he said.

He revelled alongside the master class of veteran England pacer James Anderson (4/54) as India were bundled out for 278 on day three here.

"It was all friendly banter, we were just trying to get them out of their bubble and play a few shots." "They were pretty defensive and I wanted KL Rahul to play some shots. It was all good fun out there.

"But it was important for me to show everyone that I am the real deal on the field and try to get the scrutiny off me.

"It was a proud moment for myself and my family — a moment I’ll cherish for a long time," he concluded.