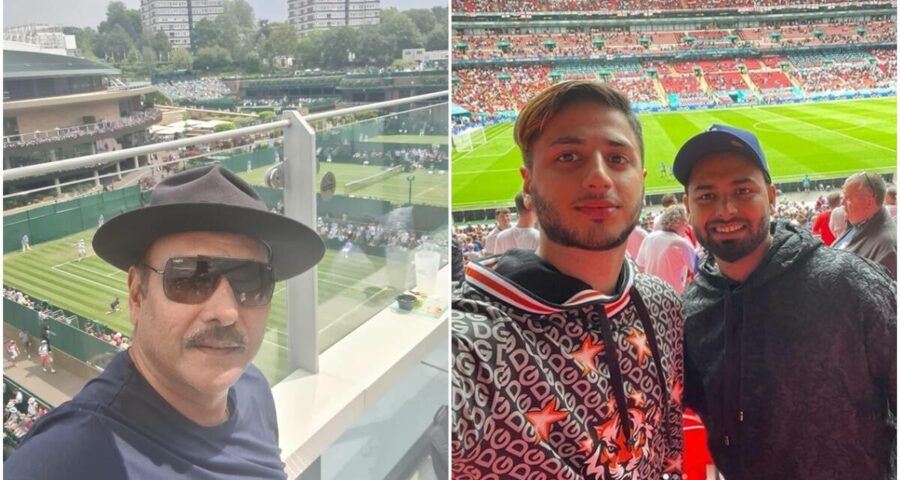 The Indian cricket team is making the most of the gap after the World Test Championship final to catch live action of some of the major tournaments taking place in England. With time on their hands before the series against England, the Indian cricket team is making the most of the gap after the World Test Championship final to unwind and catch live action of some of the major tournaments taking place in the country.

The Indian cricket team is currently on a three-week break, holidaying in different parts of the UK before they reassemble in the bubble on July 14 ahead of the start of the five-match Test series.

While Rishabh Pant was present at the Wembley Stadium for the European Championship 2020 Round of 16 clash between England and Germany, head coach Ravi Shastri was on Thursday at the Centre Court to watch Roger Federer in Wimbledon action.

Shastri was there to watch the Swiss tennis maestro’s second-round match on Centre Court. “Great to be back on a sunny day at Wimbledon. Great tradition. Centre court beckons in a bit,” Shastri tweeted.

The eight-time champion got his old sparkle back on Centre Court to eclipse Richard Gasquet and move serenely into round three. After taking the opener, the sixth seed moved smoothly through the gears and Gasquet suffered an 11th successive defeat against Federer, a run dating back to 2011 in which he has not even won a set.

India captain Virat Kohli is spending time with wife Anushka Sharma, Rohit Sharma is doing the same with his family.

India gave away a position of strength on Day 6 – the reserve day – as they stumbled to 170 all out in the second innings from 64 for 2 at the start of the day, setting New Zealand 139 runs to win. Kane Williamson and Ross Taylor shut the doors firmly on any chances of an Indian comeback and guided their team to a comfortable win after New Zealand made 249 in reply to India’s 217 in the first innings.