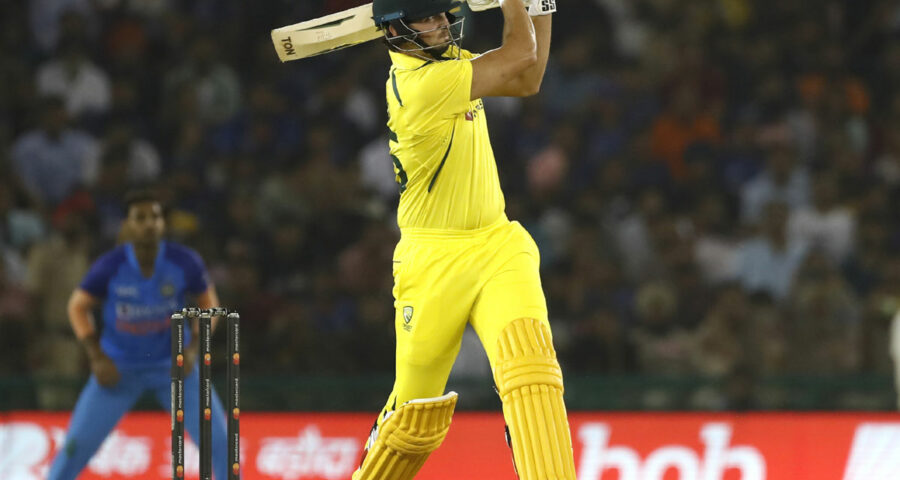 Forced to carve out a career outside the professional ranks, T20 specialist Tim David gave little thought to playing for Australia until just before his surprise selection in the World Cup squad.

The Singapore-born 26-year-old is now relishing being part of the Australian setup and scored his first half-century for the defending world T20 champions in last week’s six-wicket defeat by India in Hyderabad.

At 6-ft 5-in, David is a towering finishing batsman but might be more remarkable for being the only player in the Australian squad without a state or national contract.

Dropped by home state Western Australia a few years ago, David has had to make a name for himself in domestic T20 competitions, including the IPL and Australia’s Big Bash League.

“It’s a tough one because you’re by yourself and there’s not a lot of support a lot of the time,” David told reporters on Monday of his T20 globe-trotting.

“Of course, there are amazing opportunities and you get to experience different things. I’d encourage anyone to go out and play whatever cricket they can, whether they go to play in different countries or play locally.”

David is the only player in Australia’s 15-man World Cup squad who did not feature in last year’s triumph in the United Arab Emirates.

Experienced Australia fast bowler Mitchell Starc, who skipped the recent India tour, quipped that he looked forward to meeting David when he returned from the subcontinent.

David, who batted at six in two of the three T20Is in India, will have more chances to get to know his Australia team mates, with home warmups against West Indies and England before the Oct. 16-Nov. 13 World Cup.

He is already familiar with plenty of the world’s top T20 cricketers, though, having faced them in leagues from Pakistan to the Caribbean.

“So it’s pretty natural,” said David of his step up to the highest level.

“It’s not like I’ve been doing anything away from what I’ve been preparing for.”