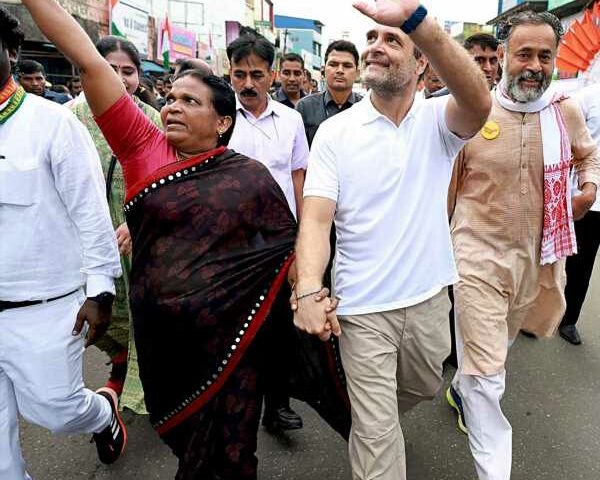 ‘Walking is the loudest statement.’
‘When someone says, I control everything and no one can oppose me, there are thousands of people on the streets saying no, we oppose you — this is a very bold statement.’

For over 20 days, political thinker and activist Yogendra Yadav has been walking 22-24 kilometres a day during the Bharat Jodo Yatra.

Mr Yadav is president of the Swaraj India Party and a leader of the Jai Kisan Andolan that led the farmer’s agitation against the farm laws. He is also a leading social scientist and psephologist, but likes to calls himself a lapsed academic.

In the last few weeks, Mr Yadav, 59, has tightly laced his sneakers, put powder on his soles and walked through Tamil Nadu and Kerala on the yatra that will culminate in Kashmir early next year.

“Our Constitution is being virtually rewritten, our basic democratic conventions are being buried, our basic values of the freedom struggle are being brazenly negated and our civilisational heritage is being turned on its head.”

“In that context, it is extremely important for someone to stand on the street and say, ‘No, I do not accept this’,” Mr Yadav tells Rediff.com‘s Archana Masih in a multi-part interview.

You have been part of the Bharat Jodo Yatra for over 20 days now. Why is it significant?

The Yatra is like a silver lining in the dark clouds that hover over our country today — our Constitution is being virtually rewritten, our basic democratic conventions are being buried, our basic values of the freedom struggle are being brazenly negated and our civilisational heritage is being turned on its head.

In that context, it is extremely important for someone to stand on the street and say, ‘No, I do not accept this’.

The Bharat Jodo Yatra has shown the promise of challenging the dominant narrative and raising the real issues of this society today, namely inflation, unemployment, economic inequality, and the insecurity faced by the people.

So, in that context, where those who rule think to divide, any call to unite is actually a silver lining. 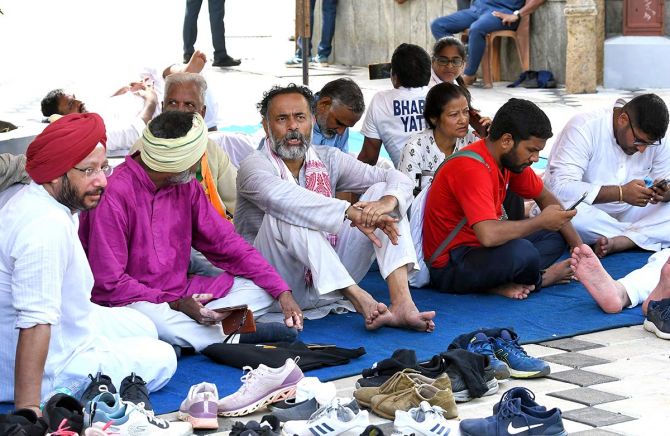 What counter narrative can it provide to the BJP’s ideological dominance?

If you look at the publicity of the yatra, through the posters and speeches given by Rahul Gandhi and other leaders, it is about the real issues of the country.

Unemployment is at the highest level in the last 40-50 years; there is the issue of inflation and for the first time someone is asking how come this country has produced the second most wealthy person in the world?

These questions are worth asking and debating in the public domain. The narrative is being created — one by one.

The very fact that the leaders of this country are actually walking on the street is making a statement. Sometimes what you do speaks louder than what you say.

There is deep respect for a padyatri. If you are willing to suffer, you are taken seriously. The fact that you are walking 22-24 kilometres everyday itself provides a narrative in today’s context, where the BJP’s hegemony is such that anyone who does not agree is made to feel like a lunatic.

The media is also silent if not complicit in this agenda of hatred. In that context, walking is the loudest statement. When someone says, I control everything and no one can oppose me, there are thousands of people on the streets saying no, we oppose you — this is a very bold statement.

It is a narrative of not just dissent, but it actually gives courage.

You and other activists were called for a meeting with Rahul Gandhi before the yatra.
What struck you about his resolve or attitude that made you want to be a part of the yatra?

First of all, this yatra is not only about Rahul Gandhi and the Congress party. It is about the resolve to unite India — Bharat Jodo.

I have personally known Rahul Gandhi for a long time. Some of the leading civil society organisations had a meeting with him on 22nd of August at the Constitution Club in Delhi. The discussion was meant to be for an hour which extended to 90 minutes. Rahul Gandhi was very candid, straightforward and sincere.

What also came across was his deep commitment to secularism and social justice. I had known this about him, but many of my colleagues were pleasantly surprised. This was an important factor that made them think of connecting with him. 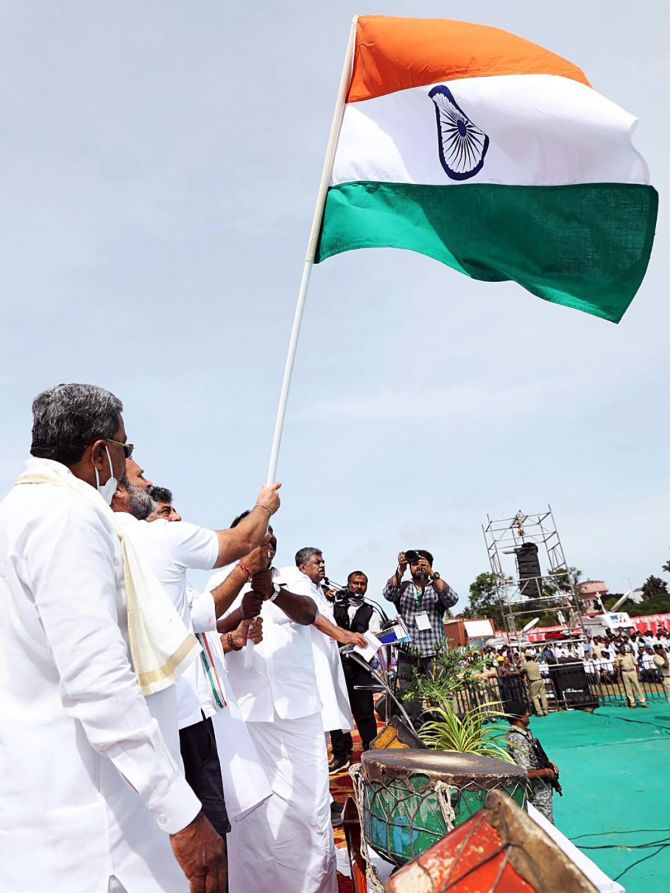 Why haven’t other Opposition parties joined this yatra?

I would imagine that the political unity of the Opposition will take time and one should not think that this would happen overnight. The Bharat Jodo Yatra provides a positive climate in the country which will form the basis of a political unity of purpose.

For me, an election coalition or gathbandhan is not important at the moment, the Bharat Jodo Yatra will provide the basis on which this unity of purpose can emerge. 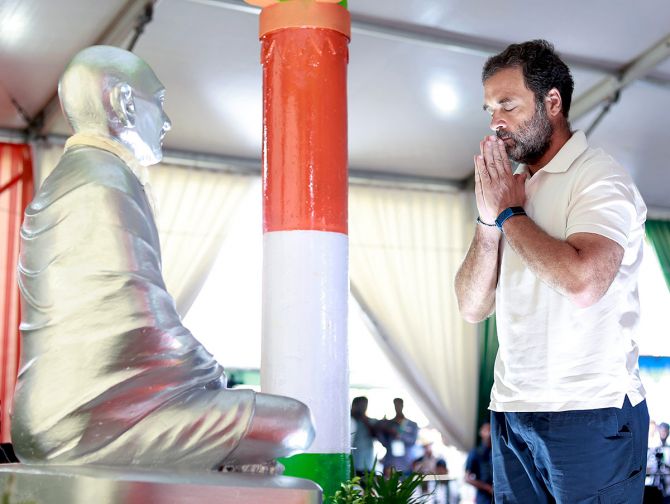 Can this yatra mend the fabric of our society?

No one yatra can do that and we should not expect any dramatic overnight impact. We cannot expect the moral impact of Gandhi’s Dandi Yatra in modern times because we don’t have anyone of the stature of Mahatma Gandhi today.

Please also remember that the Dandi March did not have immediate results. There were protests all over the country, but the British did not withdraw the salt tax. The British must have thought that they have won, but Mahatma Gandhi knew better.

He knew that this was not about the salt law; it was about giving people courage.

To my mind, the moment you say ‘Bharat Jodo’, it immediately draws your attention to the fact that are those trying to divide this country and there is a need to unite.

One of the slogans that I really like is — ‘Woh dande se todenge, hum jhande is jodenge [They break us with the rod, we unite under the flag].

I think that captures the spirit.

Marches like these are never about the locality. For example, today, none of us remember the fact that the Dandi March was a small local yatra which started and ended in Gujarat. What we remember is that it stirred the conscience of the country.

Given the fact that we do not have someone of the stature of Gandhi, even if this yatra is able to make people think that Bharat Jodo is the need of the hour then we would have achieved a modicum of success.

So, having said all this, I think it is too early to say that this has been achieved or shall be achieved.

The yatra is not about displaying the electoral might of a political party. It is not about ‘Vote jodo’, but Bharat Jodo. That is the moral message of the yatra.

Secondly, it is not only the Congress party, but there are other organisation and parties that have come to support it.

These two factors will contribute to the success of the mission of the yatra.

It would seem that one encounters messages hate more so on Twitter or elsewhere on social media, but not so much perhaps on the ground, especially in rural India. Would you agree and if so, why?

Since I am in the yatra, I been slightly out of touch with social media. Television has not made this yatra as headline news, in fact, there has been a systematic effort to play it down. The only days on which this yatra has made headlines is when some BJP leader has tried to attack which is not surprising given the nature of the media in the country right now.

This also explains the differential penetration of the yatra. Social media is based on who likes what, so those who want to hear it, hear about it, those who don’t, are blanked out of it.

Much of rural India these days depends on television for its news. If television is not showing it, then it is being blanked out.

Having said this, this is a gesture of popular consciousness, which goes beyond the good news. This country receives news outside the media. If you remember the Emergency, Mrs Gandhi was completely in control of the media which told you only good things about the Emergency. Any news that was negative was prohibited and blacked out.

Yet, everyone in this country knew that something was so seriously wrong and voted against the Congress. Such was the tide of public opinion that the party was wiped out completely.

How did people form that opinion when newspapers and radio was in control of the Congress? It happened because there are ways of forming opinions outside the media and the yatra is trying to tap into that.

That’s why I have said that the padyatra has deep roots in the sanskar of this country. The fact that a yatra is being taken across the country is making people notice it.

I would like to believe that the frequency of reception of this information may not be related to that depth of the reception.