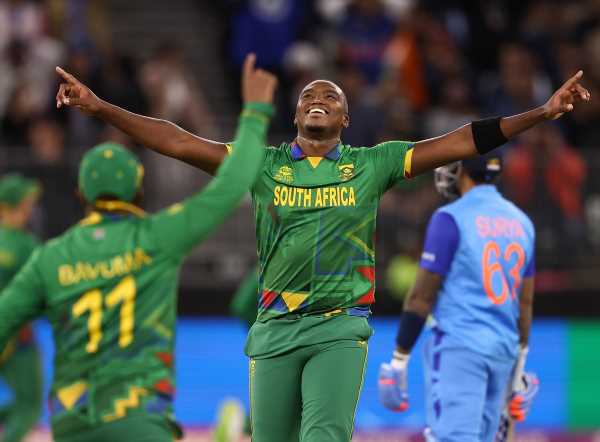 India recovered from losing four early wickets after winning the toss, guided by Suryakumar Yadav (68 off 40 balls) to a modest total of 133-9 in 20 overs.

“Pretty nerve-wracking when games get that close”, said man-of-the-match Ngidi.

“This is probably one of my biggest dreams to be honest, to get something like this (award) at a World Cup and help my country win a game.”

India’s defence got off to a perfect start when Arshdeep Singh (2-25) produced a lovely outswinger on the first ball of the second over, kissing the outside edge of Quinton de Kock’s bat to send the aggressive opener on his way for one.

Two balls later, Rilee Rossouw had to depart for a duck after a successful lbw review.

Mohammed Shami joined the act when he had Proteas skipper Temba Bavuma caught behind for 10, leaving Aiden Markram (52) and Miller to restore order to the chase.

Requiring 94 from the final 10 overs on a pitch offering plenty of bounce, South Africa came out firing against spinner Ravichandran Ashwin after the drinks break, although Markram almost came unstuck on 35 when he was dropped by Virat Kohli.

When Markram was caught pulling Hardik Pandya to Yadav, Miller’s role shifted from anchor to finisher, striking back-to-back sixes off Ashwin to take some sting out of the match.

The 33-year-old struck Bhuvneshwar Kumar through the covers to score the winning run.

Earlier, Wayne Parnell started proceedings with a maiden, but India openers Rohit Sharma and KL Rahul both blasted sixes to get off the mark and bring the crowd to their feet.

India lost their first wicket when skipper Sharma popped a return catch to Ngidi (4-29), before the fast bowler also accounted for KL Rahul (9) and Kohli (12) in quick succession.

The relentless pace assault continued when Anrich Nortje found the outside edge of Deepak Hooda for a duck, and when Kagiso Rabada held on to a diving catch at fine leg to dismiss Pandya (2) to deliver Ngidi his fourth wicket, India were reeling at 49-5.

A counter-attacking half-century by Yadav brought India back into the game in the middle overs, but when he skied Parnell into the safe hands of Keshav Maharaj in the penultimate over, the top-ranked side lost momentum.

South Africa currently lead Group Two while India drop to second, but the table has tightened following Pakistan’s six-wicket triumph against the Netherlands in a Perth double-header.