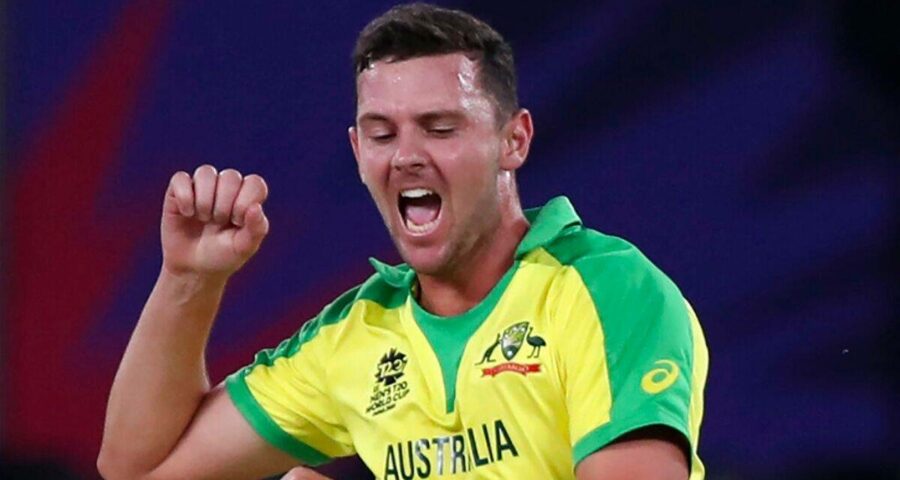 From an outlier, he has emerged as one of the most lethal in the business, wielding more influence in Australia’s World Cup triumph than Pat Cummins and Mitchell Starc, the designated white-ball wreckers.

It began with a realisation that his red-ball methods of success were untranslatable into white-ball realm. “That top of off (stump), challenging the batsman (philosophy) is still important. That time doesn’t last very long before they’re running at you, and lapping, all this sort of thing.”

Often his brain would begin to scramble when batsmen started resorting to the outlandish stuff. The first half of his T20 career, spanning just seven games, had plenty of such instances. Thrice in those games, he ended conceding more than 10 runs an over, including 50 runs from fours overs against South Africa. “Something had to change. You’ve definitely got to try and be one step ahead as much as you can be and try and predict what the batter is going to do each delivery.” he told australia.com.au.

He turned to state-mate and friend James Faulkner, the forgotten hero of 2015 World Cup, a white-ball virtuoso. “He has plenty of variations and I used to pick his brains all the time, not only to learn about the variations, but how to use them, and obviously I practised a lot in the nets and in my mind. He told me, ‘You need to have not just one, but two or three’,” he said.

So he developed not just the routine rolling the fingers over the seam slower-ball, but the cutters, cross-seamers and the knuckle ball too. Cutters he developed watching his idols Glenn McGrath, who used the variations abundantly in white-ball cricket towards the end of his career while the knuckle ball he learned from observing another Australian Andrew Tye. After development came mastery, something that comes intrinsically to him. His one-time club-mate Ben Middlebrook had told this paper of his meticulous work ethics. “He would practice at the club in the morning, then go home and practice, and when we are back for the evening session, he would be there sometimes bowling alone in the nets.”

Though emboldened by the new bag of tricks, he knew his biggest strength still was the oldest strength, hitting hard-lengths, top of off-stump or thereabouts and bending the ball both ways with unbending control. That’s his A game, the rest are just support acts. He is wary to not over-use his variations, and with the new ball, he almost always sticks to orthodox ways. Another piece of advice from Faulkner would hum in his ears. “Use the variations at the right moment.”

But what then is the right moment?

It’s usually judged with the gift of hindsight. For Hazlewood, it’s when the team needs a kiss of life, a momentum-shifting moment. Like when Daryll Mitchell and Martin Guptill were accelerating ominously. Hazlewood produced a leg-cutter— without a change in his arm-speed, a feature that makes him difficult to decode — that gripped the surface and reluctantly brushed the out-stretched bat of Mitchell, who was prematurely sucked into the shot. New Zealand were then 28/1 in 3.5 overs. For the next 33 balls, they could hit a single ball to the fence and dawdled to 57/1 in 10 overs on a perfectly fine batting surface.

His match-defining moment, though, was yet to come. Kane Williamson and Glenn Phillips, with a mixture of fortune and daring, had propelled New Zealand to 144/2 in 17.2 overs. Hazlewood dialled his knuckle-ball that quivered and wobbled before it shrivelled off Phillips’ bat to the fielder at mid-wicket. Williamson dishevelled him with a rare scoop, but he out-foxed him with a side-of-the-hand leg-cutter, as he charged down the track and mishit to long-off. New Zealand’s charge was clipped, and were restricted to 172, when they looked destined for 180-plus.

It’s not a coincidence that upon his return to T20 cricket, he had picked three titles in just a year—the Big Bash 2019-20, IPL 2021 and the World T20—and had influenced each of his teams with his retooled repertoire. His lost years, in a sense, turned out to be his biggest gain in a format he was once considered an outlier.