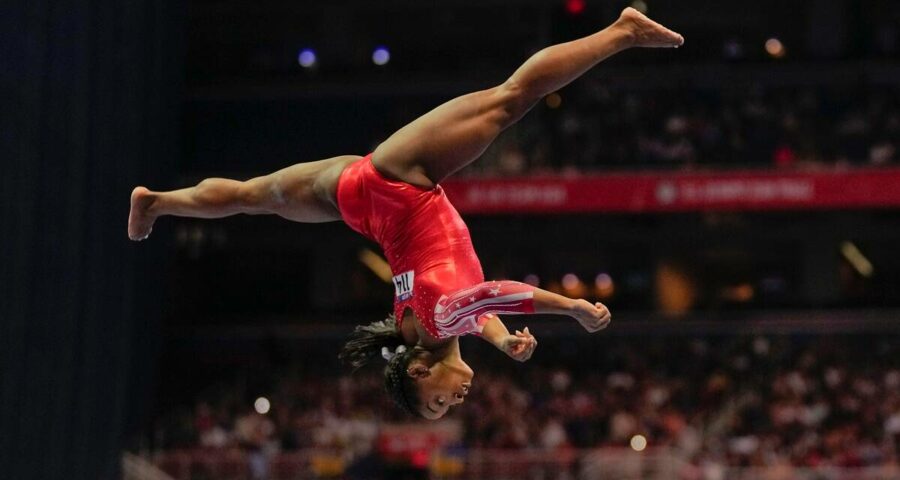 The reigning world and Olympic champion will headline the U.S. women's gymnastics team in Japan next month, clinching one of the automatic berths with another easy victory at the Olympic Trials. 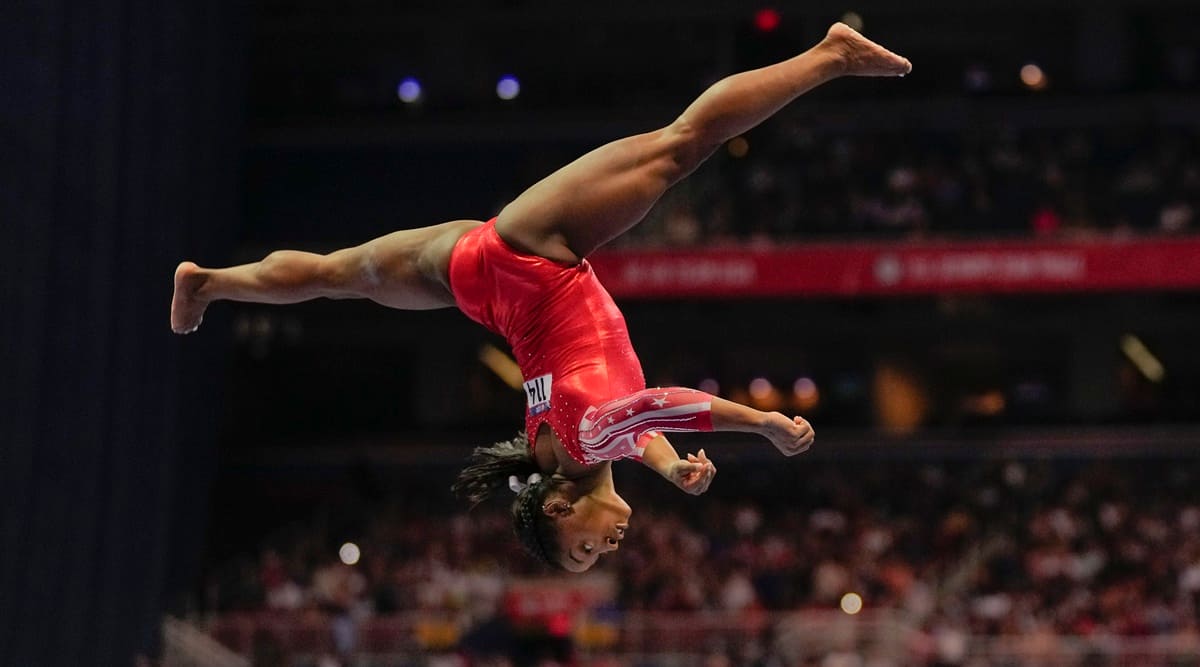 Simone Biles vs. herself remains a work in progress. The gymnastics superstar vs. the world?

Same as it ever was.

Next stop, Tokyo. And one more shot at history. And gold. Perhaps lots of it.

The reigning world and Olympic champion will headline the U.S. women’s gymnastics team in Japan next month, clinching one of the automatic berths with another easy victory at the Olympic Trials on Sunday night.

Well, maybe not that easy.

The 24-year-old found herself in tears at one point during an uncharacteristically shaky _ by her impeccable standards _ performance. Her bars were uneven. She fell off the beam. Stepped out of bounds on floor exercise. While her two-day total of 118.098 was more than two points ahead of Olympic teammate Sunisa Lee, Lee actually posted a higher all-around score than Biles during the finals.

“I kind of got in my head today and started doubting myself,” Biles said. “And you could see that in the gymnastics. But just go home, work harder. This is just the beginning of the journey.”

Or perhaps the beginning of the end. Biles isn’t sure what awaits after the Tokyo Games. She’s been too focused on trying to become the first woman in more than a half-century to repeat as Olympic champion. The lure of history and respect for her own immense talent is why she returned after a short break following her dominant five-medal performance in Rio de Janeiro in 2016. It’s why she stuck around after the COVID-19 pandemic led officials to postpone opening ceremonies in Tokyo by a year.

Biles heads to Japan as the face of her sport, U.S. delegation and maybe even the entire Olympic movement. She’s become more than just a gymnastics star since her coronation in Rio in 2016. Her consistent excellence _ her last second-place finish in a meet came more than nine years ago _ combined with her charisma and her possibility-pushing routines have thrust her into the company of Michael Phelps and Usain Bolt, athletes whose dominance on the world stage have made them Olympic icons.

Sports stops to watch when she does her thing. The pressure she feels _ both internally and externally _ is real. And it bubbled up as she gave a somewhat exhausted salute to the judges following her floor routine, grateful for the standing ovation that accompanied it but also simply relieved the big show is finally here.

“Yes, very relieved that Olympic Trials is over,” she said. “We still have a lot of work to put in once we get over there.”

Lee, Jordan Chiles and Grace McCallum will join Biles on the four-woman Olympic team. MyKayla Skinner, an alternate in 2016, was awarded the “plus-1” specialist spot. Jade Carey earned a nominative spot through the World Cup circuit, meaning she will compete as an individual.

The selection committee opted to take the top four finishers at trials even though national team coordinator Tom Forster admitted a team with Skinner on it instead of McCallum could potentially put up a marginally higher score due to Skinner’s world-class vaulting.

Fractions of a point, however, likely won’t be the difference between gold and silver. If the Americans are anywhere near the top of their game, they should win their third consecutive Olympic crown by a substantial margin. That was enough for the committee to take the ranking order at the top.

“We’re so fortunate that our athletes are so strong that I don’t think it’s going to come down to tenths of a point in Tokyo,” Forster said. “It doesn’t appear to be … so as a committee, we just didn’t feel it was worth changing the integrity of the process simply for a couple of tenths.”

Lee, who will be the first Hmong American to compete at the Olympics, is surging. Hindered by an ankle injury that slowed her during the spring and left her limping at times during the national championships earlier this month, Lee may be the best gymnast on the planet not named Biles.

The 18-year-old from Minnesota is a wonder on the uneven bars, one of a handful of gymnasts on the planet who can outshine Biles on an event. Her series of intricate connections _ all done with a fluidity and grace that makes it look effortless _ are among the most difficult in the sport.

“I just told myself to take a deep breath and do what I normally do, because this is a time where I had to just my gymnastics do its thing,” Lee said.

Chiles admits she likely wouldn’t be going to Tokyo if not for the pandemic. She moved to Houston to train with Biles two years ago but was still in the midst of finding herself as an athlete. She’s evolved into one of the most electric _ and reliable _ gymnasts in a country that boasts the deepest talent pool in the world. Chiles has hit all 24 of her competition routines in 2021, and she put her face in her hands after her floor exercise to drink in the realization of a dream she worried might never come.

“It was a very emotional moment for me because I’ve been through so much with everything that’s been going on,” Chiles said. “I’m just very excited.”

With good reason. The Americans have dominated every major international competition since winning gold in London in 2012. The streak hasn’t stopped even after the retirement of former national team coordinator Martha Karolyi and the fallout of the sexual abuse scandal surrounding former national team doctor Larry Nassar.

The cloud of Nassar still lingers as the lawsuits between survivors and the organization remains in mediation.

When Biles _ who herself is a Nassar survivor _ is on the floor, however, the narrative shifts. And she knows it. Her presence is one of the guiding lights of the entire movement. She’s ready to put on one last show.

“I think I’ll try to live in the moment just a little bit because 2016 was such a blur,” she said. “Once we got over there, everything happened so quick. … This time we get to relax a little bit on. And kind of enjoy training and enjoy the process.”