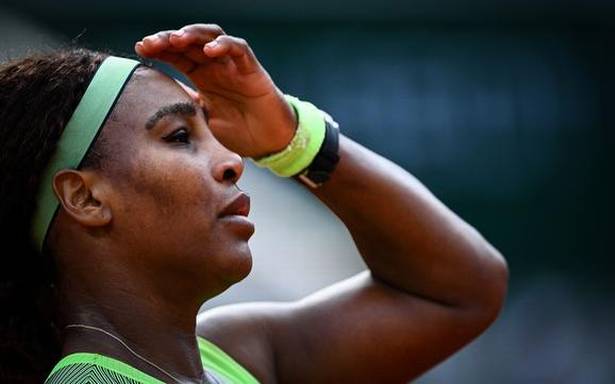 Serena Williams’ latest quest for a record-equalling 24th Grand Slam title ended in the French Open last 16 on Sunday, hours after Roger Federer pulled out of what was possibly his last appearance at Roland Garros.

The 39-year-old Williams, still one short of Margaret Court’s all-time record for most Grand Slam singles titles, lost 6-3, 7-5 to Kazakh 21st seed Elena Rybakina, while Federer withdrew as a precaution to protect his body for Wimbledon.

The American won the last of her three Roland Garros titles in 2015, and has not gone beyond the fourth round in Paris since losing the 2016 final.

“It was definitely close. I’m so close. There is literally a point here, a point there, that could change the whole course of the match,” said Williams.

“I’m not winning those points. That like literally could just change everything.”

Williams, who despite arriving here with just one win on clay this season, had seen her title hopes of boosted by the absence of Simona Halep, and early exits of Ashleigh Barty and Naomi Osaka.

Instead, she remains without a Grand Slam title since winning the 2017 Australian Open in the early stages of her pregnancy.

“I’m in a much better place than when I got here,” Williams said.

“You know, (I was) just literally trying to win a match, because it had been a really difficult season for me on the clay.”

Williams, who debuted at Roland Garros in 1998, refused to be drawn on whether this was her last French Open.

Russian-born Rybakina, 21, extended her best run at a major as she advanced to her first quarter-final, where she will face Anastasia Pavlyuchenkova for a spot in the last four.

“I am so happy with my match, it was amazing,” said Rybakina, who at 22 is the highest-ranked player left in her half of the draw.

Earlier, Federer made the decision to withdraw from what was possibly his last French Open, unwilling to risk his troublesome knee after an injury-plagued past 18 months.

Federer, a 20-time Grand Slam title winner, who will be 40 in August, had battled over three and a half hours until 12.45am Sunday morning to reach the last 16.

“After discussions with my team, I’ve decided I will need to pull out of Roland Garros today,” Federer said.

“After two knee surgeries and over a year of rehabilitation it’s important that I listen to my body and make sure I don’t push myself too quickly on my road to recovery.

“I am thrilled to have gotten three matches under my belt. There is no greater feeling than being back on court.”

The Swiss star, playing only his third tournament since last year’s Australian Open, was due to play Italy’s Matteo Berrettini on Monday for a place in the quarter-finals.

Federer’s return this year was only his second French Open participation since 2015.

Greek fifth seed Stefanos Tsitsipas, fancied to reach his first Grand Slam final, with Rafael Nadal and Novak Djokovic in the other half of the draw, sealed his return to the quarter-finals with a 6-3, 6-2, 7-5 victory over Spain’s Pablo Carreno Busta.

A semi-finalist at the past two majors, Tsitsipas was beaten in a thrilling five-setter by Djokovic in Paris eight months ago.

He will next face twice Grand Slam finalist and second seed Daniil Medvedev. The Russian, who hadn’t won a French Open match before this week, eased past Chile’s Cristian Garin 6-2, 6-1, 7-5.

The world number 85, conqueror of former US Open champion Bianca Andreescu in round one, will meet Paula Badosa after the Spaniard beat 2019 Roland Garros runner-up Marketa Vondrousova 6-4, 3-6, 6-2.

Anastasia Pavlyuchenkova returned to the Roland Garros quarter-finals for the first time since 2011, defeating former world number one Victoria Azarenka 5-7, 6-3, 6-2.