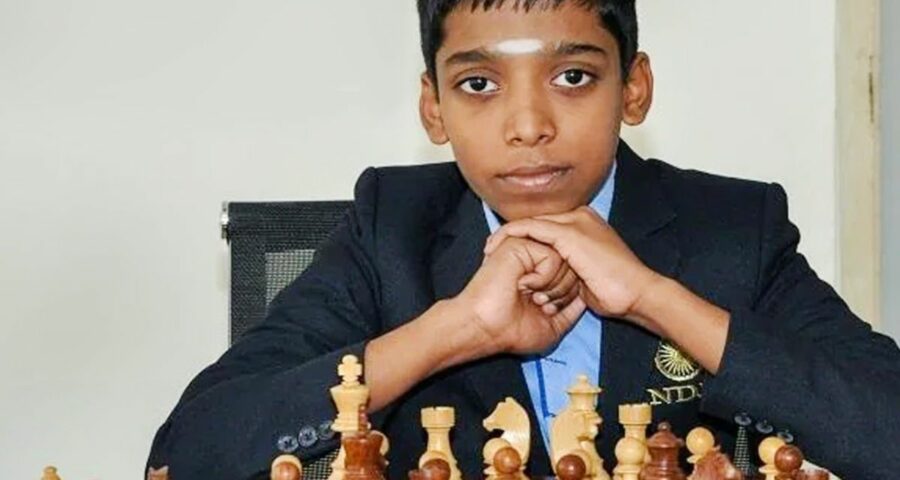 When Praggnanandhaa plays, he does not allow his confidence to fluctuate, irrespective of who his opponent is.

Other than Viswanathan Anand and Pentala Harikrishna, Praggnanandhaa is the only Indian to beat the mighty Norwegian in a tournament.

What makes it even more special is that it was achieved with black pieces in 39 moves. Praggnanandhaa earned the sweet victory by employing a Tarrasch variation of the game on February 21 after Carlsen had won his three previous games.

Praggnanandhaa’s father Rameshbabu tells Rediff.com‘s A Ganesh Nadar that his son woke him up at 3.30 am on Monday to tell him he had won. “I congratulated him and went back to sleep,” he laughs. “I think he went to sleep at 4.30 am.”

It was around 20 days ago, says Rameshbabu, that Praggnanandhaa told him one of his opponents would be the World Number 1.

He says his son did not go into the game with any expectations and played his normal game.

Though this victory will boost his confidence, Rameshbabu says that when his son plays, he does not allow his confidence to fluctuate, irrespective of who his opponent is.

The chess prodigy is now in Class 11. He does not go to school regularly, just once in three months to collect his notes. The school, his father says, has been both supportive and accommodative.

Praggnanandhaa’s elder sister, Vaishali — who studied in the same school and is now completing her BCom — is waiting for her Grandmaster norm in the game. As Airthings Masters is an online tournament, Praggnanandhaa is competing from home.

“To make sure there is no interruption, I have installed an inverter. There are two broadband connections as well, in case one doesn’t work,” says Rameshbabu.

As he is working and both children are playing at the international level — he reveals that his children discuss strategy before every game when they are together — they get very little time as a family.

“When they are at home, we make sure we have dinner together; that is the only time we get to sit down and chat,” says their father.

There are seven more rounds in this tournament after which Praggnanandhaa plans to go to Italy for his next tournament. His mother usually travels with him.

Praggnanandhaa trained for this tournament with Grandmaster R B Ramesh, who has mentored him since the beginning of his career. Before every tournament, they train together and work on his strategy.

He also gets inputs from former World champion Viswanathan Anand. “They speak to each other regularly,” says Rameshbabu.

During this competition, Praggnanandhaa relaxed by watching the India versus West Indies T20 gane. While he follows cricket, he does not have any favorite cricketer. He also enjoys cycling and goes to the temple regularly.

He watches movies, but in parts says his father, since his mind is elsewhere. He does not listen to music. 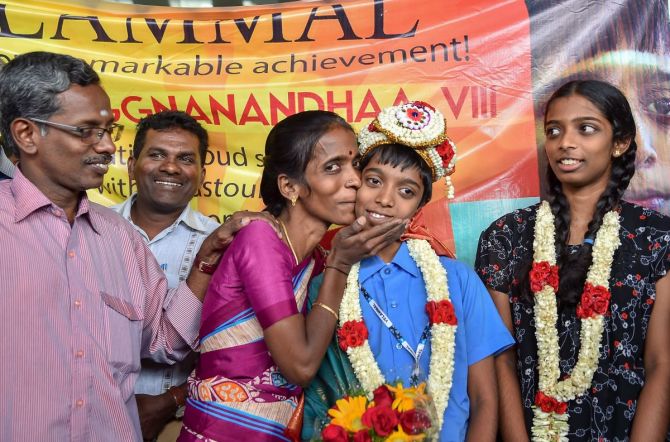 Rameshbabu says both he and his wife Nagalakshmi treat their children normally. “He might be a Grandmaster in chess, but, for me, he is always my little boy and I treat him as such,” says Rameshbabu.

The Tamil saint Thiruvalluvar said that when anyone achieves something great, people say that the parents must have done great punyam (good deeds) to beget such a child. Rameshbabu replies, “I believe Praggnanandhaa’s achievements are because of God’s blessings.”