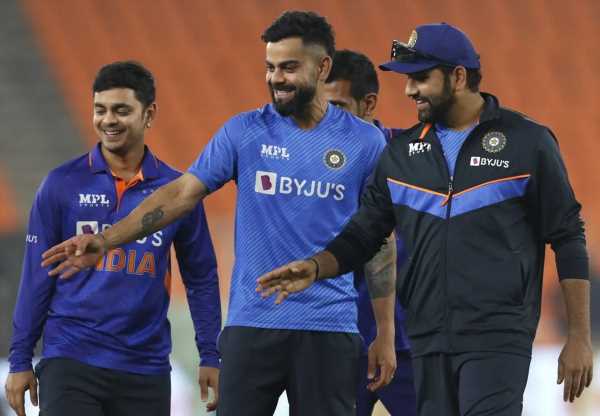 Sunil Gavaskar slammed rumours of a rift between Virat Kohli and Rohit Sharma, calling it ‘nonsense’.

The former India captain asked why Kohli and Rohit would not get along well with each other, stressing that the two players are playing for the country.

On Sunday, Kohli played under Rohit for the first time in ODI cricket as the latter took over as India’s full-time limited overs captain in India’s first ODI against the West Indies in Ahmedabad. Kohli and Rohit were interacting with each other, as they always do, and the former captain even came up with suggestions for DRS calls.

Kohli, in fact, persuaded Rohit to go for the DRS in one of Yuzvendra Chahal’s overs during India’s 6 wicket win over West Indies on Sunday.

‘Why would they not be getting along? They are playing for India. All these talks about two players not gelling is always speculation,’ Gavaskar told Star Sports.

‘According to reliable sources or allegedly or reportedly. Nobody actually tells you and this has been happening for a years. And these guys don’t even bother about it. You wouldn’t even bother about this kind of speculation because you yourself know what the truth is. And so there is nothing,’ he added.

Gavaskar backed Kohli to hit peak form soon, adding that there is no way Kohli will not be thinking of performing under Rohit’s captaincy.

‘There are often speculations that the captain who is now a player in the team will not want the new captain to succeed. This is nonsense. Because if he doesn’t score runs or a bowler doesn’t pick wickets then he is going to be out of the team,’ Gavaskar pointed out.

‘He has already lost the captaincy or opted out of captaincy, now you don’t contribute with the bat or ball then you are going to be out of the team. So all these talks are mere speculations from people who have nothing better to do and are trying and creating stories.’;

‘Kohli will get runs whether he is playing under Rohit or anybody else. He is going to score runs for India.’