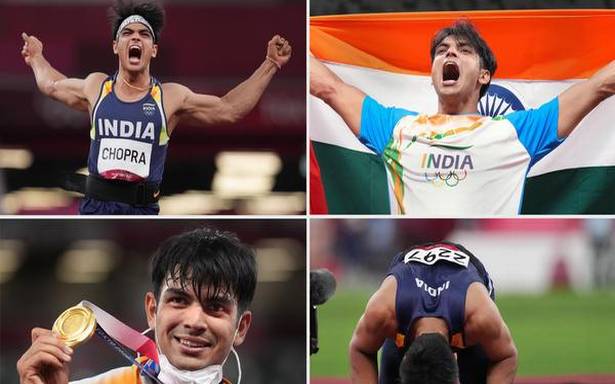 The Tokyo Olympics also witnessed many “firsts” for India at the Summer Olympics.

India’s campaign at the Tokyo Olympics ended on a high on Saturday, August 7 with Neeraj Chopra winning India’s first-ever Gold medal in Athletics in the Javelin Throw and Bajrang Punia bagging the Bronze in Wrestling in the men’s freestyle 65kg category. With seven medals, including one Gold, two Silvers and four Bronze medals, this edition was India’s best in terms of the medal tally. The previous best medal haul came at the 2012 London Olympics when India won two Silvers and four Bronze medals.

The Tokyo Olympics also witnessed many “firsts” for India at the Summer Olympics. Here is a look at few such instances:

The 23-year old won India’s first-ever Gold in Athletics after finishing on top of the podium in the Javelin Throw on Saturday, August 7. He also became only the second individual Gold medalist for the country at the Summer Olympics. Abhinav Bindra had won the country’s first individual Gold after winning the 10m Air Rifle event at the 2008 Beijing Olympics. Whether he is also India’s first-ever medalist in athletics will always be debated. While the International Olympic Committee still credits Calcutta-born Norman Pritchard as India’s first medalist in the sport (he won the silver in the 200m dash and the 200m hurdles in the 1900 Paris Olympics), the IAAF (now World Athletics) showed that he represented Great Britain. Nevertheless, Neeraj Chopra will be India’s first Gold medalist in athletics.

By winning the Bronze in the women’s singles event, shuttler PV Sindhu became India’s first woman to win two individual medals at the Olympic Games and to win medals in back-to-back editions. She had won the Silver at the 2016 Games held at Rio. She also became the first Indian player to win the World Badminton Championship and two Olympic medals across genders. She had won the World Championship in 2019.

Fourth-place for the Women’s Hockey team

The Indian Women’s Hockey team made history by reaching their first-ever semi-final at the Olympic Games. En route to the last four, they beat Australia, the second-highest ranked team in the world, in the quarter-final. However, they lost to Argentina in the semi-final. While India had also finished fourth at the 1980 Moscow Games, the competition had featured only six teams in a round-robin format. The top three placed teams won the medals. India had finished 12th at the 2016 Rio Olympics.

Aditi Ashok came agonisingly close to a medal in the Women’s Individual Stroke Play event on Saturday, August 7. She finished fourth in the competition. The 23-year old, who is ranked 200th in the world, stood second for most of the competition. However, she missed a medal by just one shot on the final day. She had also featured at the 2016 Rio Olympics and had stood 41st.

On July 25, rowers Arjun Lal Jat and Arvind Singh became the first Indian double sculls pair to reach the semi-finals at the Olympics. They finished 11th in the event, which is the best ever result for the country at the Olympic Games. India’s previous best at the event was the 18th place finish at the London Games in 2012.

India’s fencing debut at the Olympics

Bhavani Devi became the first Indian fencer to qualify for the Olympic Games. She represented the country in the Women’s Sabre Individual event. The Chennai-based fencer is also the first Indian to win the Gold medal in the senior Commonwealth Fencing Championship. She achieved the feat in 2018. She lost to fourth-seeded Manon Brunet of France in the second round at the Tokyo Olympics.