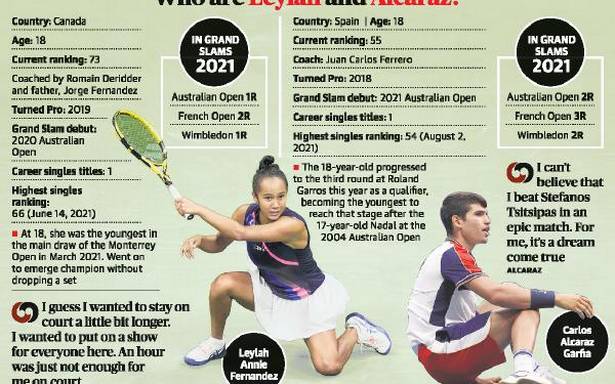 Defending champion Naomi Osaka and third seed Stefanos Tsitsipas became high-profile casualties in the third round of the U.S. Open on Friday as two 18-year-olds announced themselves on the big stage by advancing to the last-16 for the first time.

Two-time champion Osaka’s title defence ended in tears as she suffered a stunning 5-7, 7-6(2), 6-4 loss to Canadian Leylah Fernandez and the Japanese, who uncharacteristically lost her cool during the match, said she planned to take a break from the sport.

Osaka said she will take an indefinite break from playing tennis. “Basically I feel like I’m kind of at this point where I’m trying to figure out what I want to do,” said Osaka, wiping away a tear at the media session. “I honestly don’t know when I’m going to play my next tennis match. I think I’m going to take a break from playing for a while.”

With that, she put on a mask, rose from her chair and ended the session.

“This victory means a lot to me. It’s the best match, the best win of my career,” said Alcaraz, who was not distracted by another infamous bathroom break from the Greek who was jeered by the crowd.

Second seeds Daniil Medvedev and Aryna Sabalenka advanced with straight-set victories in their third round matches while German Angelique Kerber beat Sloane Stephens 5-7, 6-2, 6-3 in the battle of the former champions.

Meanwhile in mixed doubles, Sania Mirza and Rajeev Ram made a first round exit from the mixed doubles after losing to Dayana Yastremska from Ukraine and Australia’s Max Purcell, here 3-6, 6-3, [7-10].