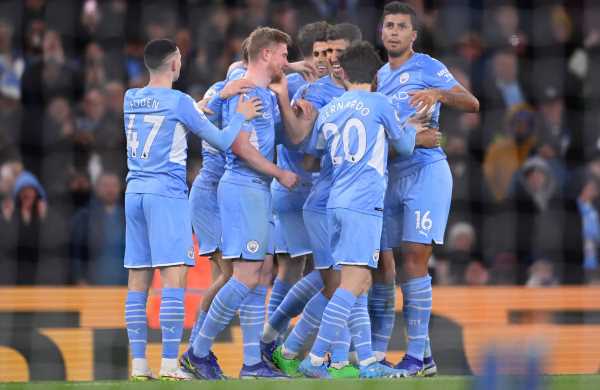 Manchester City stretched their lead at the top of the Premier League standings to 12 points after a comfortable 2-0 win over Brentford on Wednesday.

Brentford did a good job of keeping City at bay in the first half, and almost got to the interval without being breached, but conceded a soft penalty in the 40th minute, which Riyad Mahrez converted to give the champions the lead.

City remained untroubled after the break and put the game to bed in the 68th minute, with Kevin De Bruyne firing home after a poor clearance from Brentford goalkeeper David Raya.

The rest of the match was a stroll for City as they stretched their unbeaten run to 14 league games, pulling further clear of second-placed Liverpool, who face Leicester City on Thursday having played two games fewer than the champions.

Brentford’s struggles continued after a fifth successive league defeat pulled them closer to the relegation zone. They sit 14th, six points above Norwich City in 18th, having played one game more.

“That was a tough game,” City coach Pep Guardiola said. “They defend in high press, then deep and compact. There was no space between midfield and attack. We had to be patient and not make any mistakes.

“It was an important victory in a tough game that we expected. We are in a good position. I don’t know if we are the best, but we are happy to be on 60 points.” 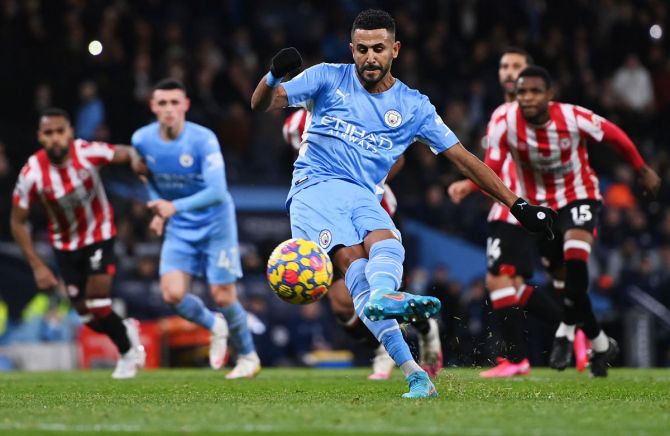 Since losing 2-0 to Crystal Palace in October, City had won their last six Premier League home games by an aggregate score of 20-4 ahead of Brentford’s visit – just the opponent Thomas Frank’s out-of-form side did not want to be facing.

But other than a Joao Cancelo effort that was scooped over the top and Aymeric Laporte’s side-foot wide, Brentford looked comfortable in their quest to blunt the relentless league leaders.

Danish defender Mads Roerslev’s needless tackle on Raheem Sterling as he looked to get to the byline, however, undid the visitors’ good work, with Mahrez stepping up, despite having missed from the spot at the Africa Cup of Nations last month, and firing home.

Mahrez has now scored in seven consecutive club matches in all competitions – only the third player to do so under Guardiola during the Spaniard’s top-flight managerial career, after Lionel Messi at Barcelona (twice) and Sergio Aguero at City.

City did not need to hit top gear in the second half, such was their control. They scored a second without much effort, as Raya passed the ball straight to Sterling, whose shot was blocked into the path of De Bruyne, with the Belgian slotting his seventh league goal of the season into the empty net.

Spanish midfielder Rodri almost made it three late on, but Raya kept his scuffed strike out, with City goalkeeper Ederson seeing out the 100th clean sheet in the Premier League under Guardiola with ease down the other end.

“I think we went to the Etihad against the best team in the world and we kept them to few chances,” Frank said. “Our mindset was unbelievable.

“The only way they got a goal was a mistake from us. Two big mistakes led to their goals. We also had to take our half chances that we had.

“There is so much positive to take from this. If we keep putting these performances in we will turn things around.” Southampton twice came from a goal behind to put a huge dent in Tottenham Hotspur’s top-four ambitions with a 3-2 away win in a compelling Premier League clash on Wednesday.

Son Heung-min appeared to have secured a vital win for a ragged Tottenham with a superb finish 20 minutes from time.

But Southampton, who had been the better team throughout, struck twice in the space of three minutes.

Mohamed Elyounoussi headed in the equaliser before Che Adams won it for the visitors with another header — James Ward-Prowse providing the crosses for both goals.

As the rain fell in north London there was still time for more drama as Tottenham substitute Steven Bergwijn thought he had rescued a point, but his effort was ruled out for a clear offside after a VAR check.

It was a stressful night for Tottenham manager Antonio Conte who watched his team get outplayed at times and defend appallingly. He also got embroiled in a fierce slanging match with Southampton players and technical staff after Son’s goal.

“In the first half we made many mistakes and many times the pass was not good and we risked complicating our life today,” Conte said. “The players gave everything tonight and that is why it was a pity to lose the game.” The night had begun well for Tottenham when Lucas Moura played a clever pass to Pierre-Emile Hojbjerg and his low cross, aimed at Son, was intercepted by Saints defender Jan Bednarek who could only turn the ball into his own goal.

Southampton immediately changed gear and begun to carve open a Tottenham side with some fluent football.

They drew level five minutes later when Tottenham failed to clear the ball from their area after Ben Davies had initially made a mistake and when Romain Perraud played the ball in Armando Broja produced a first-time finish.

Sensing Tottenham’s unease, Southampton piled forward before halftime and Stuart Armstrong’s header forced a fine save by Hugo Lloris. Perraud then let fly with a 30-metre thunderbolt that beat Lloris but cannoned off the crossbar.

Tottenham were still struggling to gain any sort of control in the second half and former Southampton player Hojbjerg made way for new signing Rodrigo Bentancur.

The hosts then took the lead in the 70th minute when Harry Kane played in Moura who whipped in a low delivery for Son to meet with a brilliantly-controlled shot.

Southampton felt there had been a foul on Broja by Emerson Royal in the build-up and while he was down having treatment, Conte lost his temper, gesticulating at Southampton players.

When order was restored it was Southampton who had the clearer heads and thanks to a couple of majestic Ward-Prowse crosses and some non-existent Tottenham marking they returned home with a deserved three points.

“The mentality and character of the team is outrageous, it is fantastic to watch,” manager Ralph Hasenhuttl said.

“They are fighting for everything. We played fantastic football and played 23 passes before the second goal. Fantastic.”

Coutinho sparkles for Villa, but Leeds grab draw in thriller 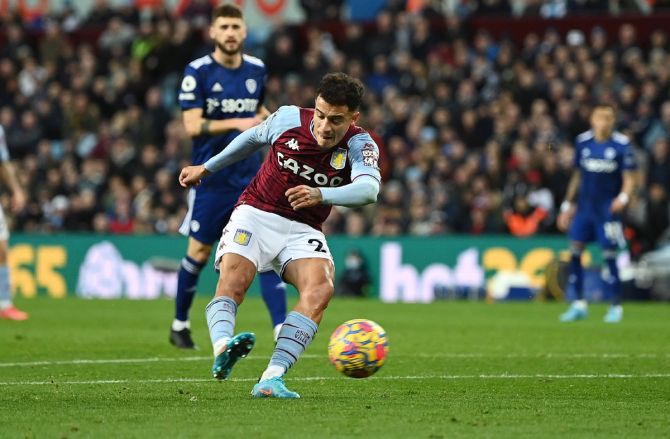 Leeds United battled back to earn a 3-3 draw at Aston Villa after a virtuoso first-half display by Philippe Coutinho had left Marcelo Bielsa’s team crestfallen on Wednesday.

Brazilian Coutinho cancelled out an early opener by Daniel James with a classy finish and then produced two majestic passes for Jacob Ramsey to score twice in five minutes.

James bravely nodded Leeds back into the contest in stoppage time at the end of a rollercoaster opening period.

Leeds, who have fallen too close to the relegation zone for comfort, got their reward for a tenacious display in the 63rd minute when a corner fell at the feet of Diego Llorente and he fired home from close range.

A scintillating first-half was described by Villa manager Steven Gerrard as “chaos” and he was not wrong, although no one was complaining about the rich entertainment on offer.

“It was frantic, end-to-end and 100 mph. We almost brought into the Leeds style and we needed more calm heads out there so it looked more like our style,” Gerrard said.

“A draw was the right result. A fun game for the fans tonight but not one for the coaches!”

Former Manchester United winger James got the ball rolling with a low finish in the ninth minute and he came agonisingly close to making it 2-0 with a thumping effort against the crossbar.

Villa made the most of that slice of good fortune and equalised almost immediately when Matty Cash cut a ball back from the byline and Coutinho took a touch before firing a shot on the turn beyond Illan Meslier.

Barcelona loanee Coutinho, who marked his Villa debut with an equaliser at Manchester United last month, then took over.

An exquisite pass sent in Ramsey to beat Meslier in the 38th minute and he produced a carbon copy five minutes later to split the Leeds defence again, this time Ramsey lashing an unstoppable shot into the top corner.

Leeds looked shellshocked but James somehow got his head to a deflected Rodrigo cross to nod over the line and at least send the visitors back to the changing room with hope.

By comparison the second half was uneventful although still highly-entertaining.

Llorente fired in following a poor clearance by Tyrone Mings from a corner and in a frenetic finale tempers began to fray with Villa’s Ezri Konsa sent off after catching Meslier with his forearm as a corner was played in.

While there were several candidates for man-of-the-match, Coutinho’s display in the first half had Gerrard purring.

“It was vintage Philippe Coutinho tonight. He’s certainly getting back close to where he was when the whole world was speaking about him,” Gerrard said.

“He will get better and better. He is a joy to work with.”