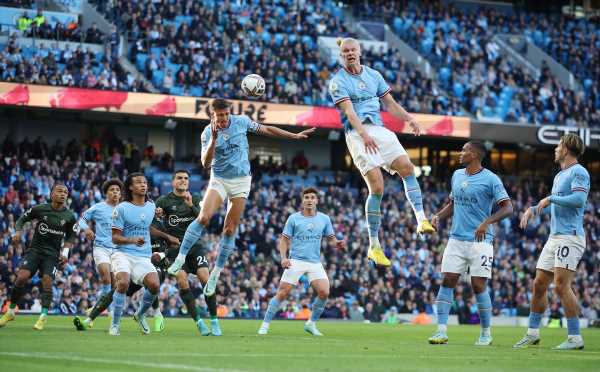 Erling Haaland scored for the 10th game in a row in all club competitions as Manchester City cruised to a 4-0 win at home to Southampton on Saturday to move to the top of the Premier League.

The Norwegian striker had endured a difficult afternoon by his usual prolific standards but eventually got on the scoresheet in the 65th minute to grab City’s fourth goal after first-half strikes from Joao Cancelo and Phil Foden plus a volley after the interval from Riyad Mahrez.

The victory took City to the top of the standings on 23 points from nine matches although Arsenal, on 21, can reclaim the lead if they beat Liverpool at home on Sunday.

Haaland went into the game in ruthless form after hitting a hat-trick in last week’s 6-3 drubbing of Manchester United and scoring a double in the 5-0 win over Copenhagen in the Champions League.

However, luck evaded him when he narrowly failed to open the scoring in the first half, smashing a shot off the inside of the far post and watching the ball trickle out of the goal.

Haaland later scuffed a shot wide and mistimed a header in the second half, but he was not to be denied, firing a first-time shot into the net after a cut-back from Cancelo to score his 15th league goal of the season and his 20th overall.

Portugal full back Cancelo was City’s most active player in the early stages of the game and after seeing several of his crosses come to nothing he took matters into his own hands, rifling a low shot into the net to give the champions the lead in the 20th minute.

Foden doubled their advantage later in the first half with a delightful chip, the England midfielder scoring for the fourth time in two league games after, like Haaland, netting three times in the derby win over United.

Mahrez volleyed in a chipped pass from Rodri to get the third goal early in the second half as City continued to toy with Southampton.

Haaland was in danger of drawing a blank for the first time for City since the 4-0 win over Bournemouth on Aug. 15 but kept his remarkable goal streak going and is now four games away from equalling Leicester City striker Jamie Vardy’s record of scoring in 11 consecutive Premier League matches, dating back to 2015.

Chelsea stroll past Wolves to continue winning run under Potter 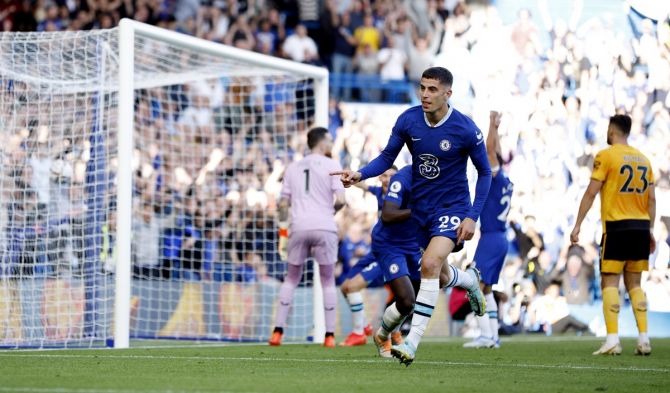 Chelsea had clinched a last-gasp win at Crystal Palace in Potter’s first league game before thumping AC Milan on Wednesday and continued their run against managerless Wolves, with a scoreline that eventually reflected their dominance.

Potter made seven changes to his starting lineup with Tuesday’s reverse fixture against Milan at San Siro in mind, but Chelsea showcased their strength in depth and outclassed a lacklustre Wolves side whose only win this season came against Southampton early in September.

The victory took Chelsea to fourth in the standings with 16 points from eight games while Wolves remain 18th with six points after three straight defeats.

“It’s difficult to keep the same eleven with the schedule but there is an element of consistency to how we play. Really happy with the boys and how we’ve recovered,” Potter said.

In the first half alone, Chelsea had 12 shots at goal, four of them on target, and dominated 70% possession but struggled to make the pressure count as they were thwarted both by their own wastefulness and a string of fine saves from Jose Sa.

Wolves threatened to steal the unlikeliest of leads minutes before the break through Matheus Nunes but the midfielder headed over, while former Chelsea striker Diego Costa missed another rare chance after stumbling as he tried to control the ball.

Havertz finally found the breakthrough just before the half-time whistle as Sa, who was off his line, was unable to deal with his looping header that matched the equally impressive cross from Mason Mount.

Pulisic missed some of Chelsea’s best chances and had his curling shot tipped away by Sa in the first half but made amends 10 minutes into the second, playing a swift one-two with Mount before dinking the ball over the onrushing goalkeeper.

The visitors were never really in the contest and substitute Broja hammered home a through ball from Mateo Kovacic in added time to score his first Chelsea goal and cap a perfect afternoon for Potter.

“We needed that goal before halftime,” Havertz said. “We have a big squad, a lot of good players. We’re all together in this. Today we had a lot of changes but everyone is involved in every game.

“We have to be positive, even those who don’t play. Armando gets a chance and scores straight away… 3-0 is a good result. In general, I’m very happy.” 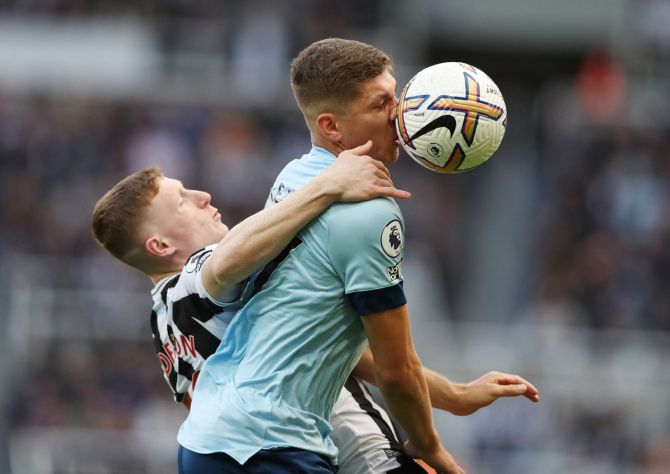 Newcastle United midfielder Bruno Guimaraes scored twice to help his side to a 5-1 win over Brentford at St James’ Park on Saturday as they moved up to fifth in the Premier League, a year and a day after the Saudi Arabia-backed takeover of the club.

Bryan Mbeumo had a 10th-minute goal for the visitors chalked off after a VAR review found Ivan Toney to be offside in the build-up, and 11 minutes later Guimaraes stooped to score with a superb header from Kieran Trippier’s cross in the 21st minute.

Jacob Murphy added a second shortly afterwards as Brentford’s defence came unstuck while trying to play out from the back, with Callum Wilson snapping up a loose ball and squaring to Murphy, who slammed it home first-time.

Brentford were awarded a penalty for a handball by Dan Burn early in the second half, and Ivan Toney, who never established himself during a three-year spell at Newcastle, stepped up to stroke home the spot kick.

Guimaraes quickly snuffed out any hope of a comeback, winning the ball out on the wing before advancing and firing home a wonderful solo goal two minutes later.

That took the sting out of Brentford and, having gone close with an early first-half effort, Miguel Almiron got the goal his industry deserved in the 82nd minute after Brentford again gave away possession in their own half.

Ethan Pinnock rounded off a miserable afternoon for the visitors’ defence when he turned Joelinton’s cross into his own net in the 90th minute.

The win lifts Newcastle, who were 19th when the takeover was sealed on Oct. 7 last year, up to fifth spot in the standings on 14 points, four ahead of 12th-placed Brentford.

“Today was a tough game. Brentford make it very difficult for you. We had a bit of a slow start but the first goal changed everything from our perspective,” Newcastle coach Eddie Howe told the BBC.

“If you look where the goals came from today our intensity and pressing, we forced them into errors and we got rewarded for that… overall, a great day for us,” he added.

“If you want to win football matches it is relatively important you don’t make one, two, three, or four mistakes leading to goals. To make four mistakes then you lose football games and basically that is it,” he told the BBC.