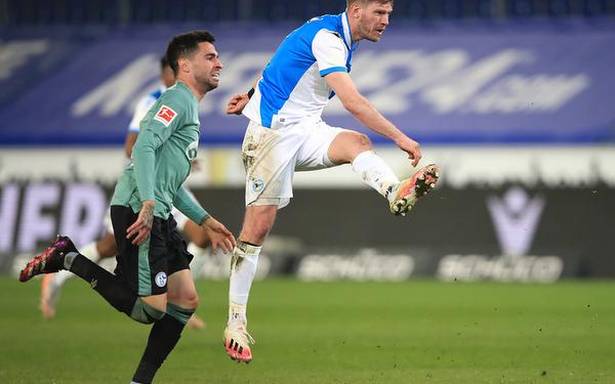 Schalke relegated, Bayern pulls further ahead even as Leipzig loses

As Chelsea’s ownership climbed down from plans to join a breakaway Super League, the team climbed into the top four of the Premier League with a far-from-impressive 0-0 draw against Brighton on Tuesday.

Thomas Tuchel’s side was stifled inside Stamford Bridge, barely creating a clear-cut chance against the relegation-threatened visitor.

The point moved Chelsea above West Ham on goal difference and into fourth place, the final Champions League qualification position. Chelsea and West Ham play each other on Saturday.

Brighton moved seven points clear of the relegation zone and has a game in hand over third-from-last Fulham.

Schalke was finally relegated from the Bundesliga after a dismal season with a 1-0 loss at relegation rival Arminia Bielefeld on Tuesday.

It was Schalke’s 21st defeat in 30 games and the quickest of its four demotions with four games still to play. The Gelsenkirchen-based club had been playing in the Bundesliga continuously since earning promotion in 1991.

Fabian Klos’ 50th-minute goal was enough for the home side to boost its own chances of survival.

Bayern Munich capitalised on second-place Leipzig’s shock 2-1 loss at Cologne by moving 10 points clear at the top with a 2-0 win at home over Bayer Leverkusen.