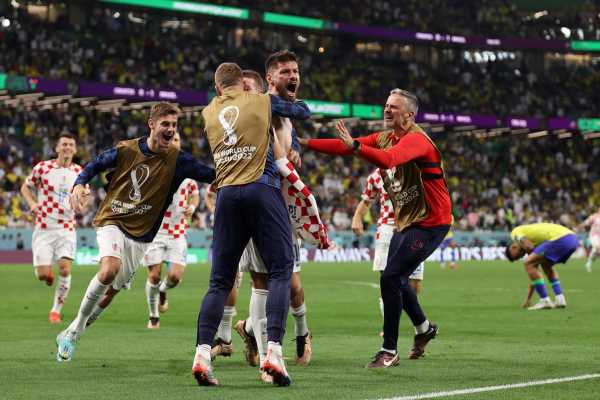 ‘We spare no effort giving our best, and that is our recipe for success’

Croatia coach Zlatko Dalic had said facing a Brazilian side firing on all cylinders in a World Cup quarter-final was a terrifying prospect.

But the only terror seen at Education City Stadium on Friday was etched on the faces of the Selecao and their supporters along with shock and disbelief as gritty Croatia came back from 1-0 in extra-time to claim a 4-2 penalty shootout victory and with it a spot in the semi-finals.

“As to the penalty shootout we are fighters, we played our hearts out and that’s it,” said Croatia keeper Dominik Livakovic, who was named man of the match. “We are experienced and we are raised as fighters.

“We spare no effort giving our best, and that is our recipe for success.”

“We are going one match at a time and see where it gets us.”

Where it has gotten Croatia is a spot in the last four and one win away from an immediate return to the tournament’s final.

The 2018 runners-up had appeared headed for the exit when Neymar produced a moment of solo magic scoring in extra-time to give the five-time champions a 1-0 lead with just 15 minutes to play.

But Croatia, who needed penalties to get past Japan in the round of 16, again showed their iron will, hitting back with an equaliser from substitute Bruno Petkovic, who hammered home in the 117th minute to keep them alive.

In the shootout it was the Croatians keeping their cool and composure from the penalty spot as Brazil wilted under the pressure with Marquinhos and Rodrygo failing to convert.

“This was definitely something special against the favourites. (Brazil are) a fantastic team,” said Croatian defender Dejan Lovren. “We said in the last half of the last 15 minutes: Don’t stop believing.

“Everybody said that. We knew we would come back in this game, no matter how hard.

“We are really special.”

Croatia are no strangers to operating under pressure.

In 2018 they needed two shootouts and an extra-time win to reach the final.

Despite that runnerup performance in 2018 few were giving the talented but aging side much chance of getting beyond the round of 16 in Qatar.

The road looked at a dead end going up against a star-studded Brazil side that danced their way into the quarter-finals oozing confidence.

That confidence was quickly shaken by a rough and tumble Croatian team that refused to give ground, even an inch, denying Neymar and company the space to work their brilliance.

In the end it was determination and self-belief that prevailed as Croatia refused to wave the white flag.

“This is the second World Cup semi-finals and we are a small country and won against the greatest favourites.

“I’m very glad they played the way they played and they are great fighters. Only Croats can do that.”