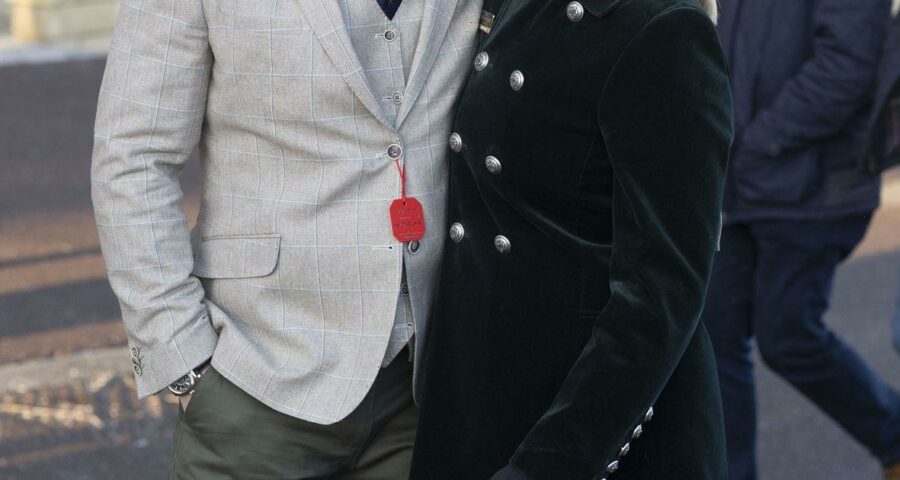 Mike Tindall showed off a manicure he received from daughter Mia as he enjoyed a loved-up day with wife Zara on Friday.

The I'm A Celebrity… Get Me Out Of Here! star, 44, and Zara, 41, were seen spending a day with friends at the International Race Meeting at Cheltenham Race Course, less than two weeks after the former rugby pro finished the ITV reality series in fourth place.

The couple wrapped up warm for a day at the races, with Mike looking smart in a grey suit jacket and khaki green trousers, alongside a blue shirt and tie and flat cap.

His wife Zara, meanwhile, wore an all-black look, featuring a long black coat and a hat that featured a pop of bright green.

The couple share three children together: daughters Mia, 8, Lena, 4, and son Lucas, one.

Mike and Zara spent the day looking loved-up as they socialised with friends, enjoying some quality time together after Mike spent three weeks in the Australian jungle.

Royal fans got a behind the scenes look on the couple’s relationship during I’m A Celeb’s Coming Out Show, which followed the celebrities as they left the camp and were reunited with their friends and families.

During the episode, Zara was filmed in the car while on the way to reunite with her husband and opened up on how much he'd been missed.

She said: "It’s been a long few weeks, the kids have missed him heaps so it’ll be nice to get him out."

When Mike was announced to be the person to leave the jungle, Zara looked surprised, covering her mouth in shock as she looked to the camera.

The couple then had a sweet reunion on the famous bridge, where Zara ran up to Mike to give him a tight hug.

As they got off the bridge, host Ant came up to ask Mike how happy he was, to which both Mike and Zara said they were delighted to be reunited.

Since getting out of the jungle, Mike has spent lots of quality time with both Zara and their kids as they take advantage of the Australian summer while enjoying a family holiday travelling around the country.

Just two days after getting away from the jungle, Mike was spotted at Sea World on Australia’s Gold Coast with Zara and their kids.

The rugby player swapped his khaki jungle clothes for a navy T-shirt with a graphic print, matching shorts and white trainers.

Sweet pictures from their lovely family day out show him holding his kids as Zara pushes the pram around the park.